First night out with the ZWO AM5 strain-wave gear/harmonic drive mount, and I am just stunned at how easy this mount is to setup, polar align, and run.

I swung the scope south to IC 4665—I just picked a nice star cluster in Ophiuchus, near the meridian in the south. I cleared calibration in PHD2, ran a new calibration, and then guided for an hour. I ran with defaults, 1 second exposures. Total RMS error through the session was between 0.4 and 0.7 arcseconds. And then I jumped into a bunch of 180 second subs of the Veil Nebula in Ha, watching the guide graph hovering in the high .4s and low .5s.

This was my first time setting up the AM5 for a night of imaging, and I think I was expecting something weird or some tech idiosyncrasy to appear, because that's the way it always is. New devices are just going to behave in ways you might not anticipate. This was my first experience positioning the mount, scope, and tripod, which I easily carried out to the deck with everything connected and ready to go—tripod, mount, scope, everything. Polar alignment in NINA is simple and automated, and the AM5 azimuth and altitude adjustments are smooth and easy to dial in. I had the mount aligned and ready to capture data in two or three minutes. Again, I'm a bit stunned at how uncomplicated this was—I was expecting something to go wrong, but the AM5 was just doing everything right, with accurate slewing, guiding, tracking, and I was sitting on the couch in the living room taking 180 second subs on the back deck.

Some surprises: I didn't expect the AM5 to be so compact and transportable—and I say this knowing my primary purpose for buying the mount was portability. It's crazy how easy this is to move around, and I think it comes down to the counterweights. They are a such a fundamental part of the system that it felt like I had missed something in setup, but after one night under the stars with the AM5, I'm thinking—unless you have a massive scope—counterweights should be a thing of the past. We have the technology. Why do we need them?

I did try out the new mount with Ekos/INDI and ran into an error connecting the AM5—an error setting the UTC Offset. I didn't dig into it, but it looks like a similar error—an old error—with the LX200 instruction set where Ekos is using a float and the mount is expecting an integer for the offset? Seems pretty minor to me, and easily fixable, so I will come back to Ekos soon as I have some time.

Finally, the skies weren't perfect, seeing was maybe a little above average, and the mount performed with those total RMS error numbers, .4, .5, .6 arcseconds. Amazing. 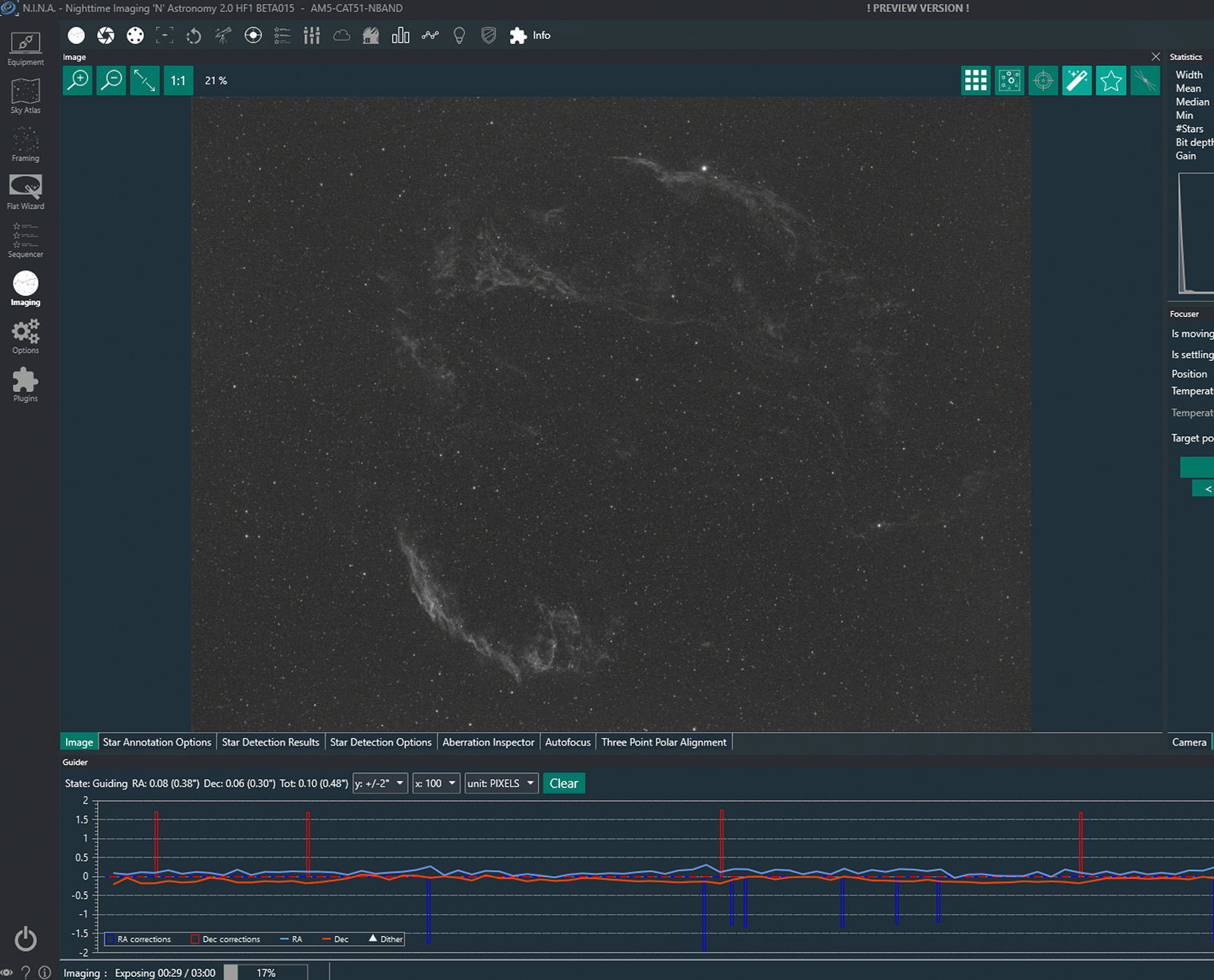 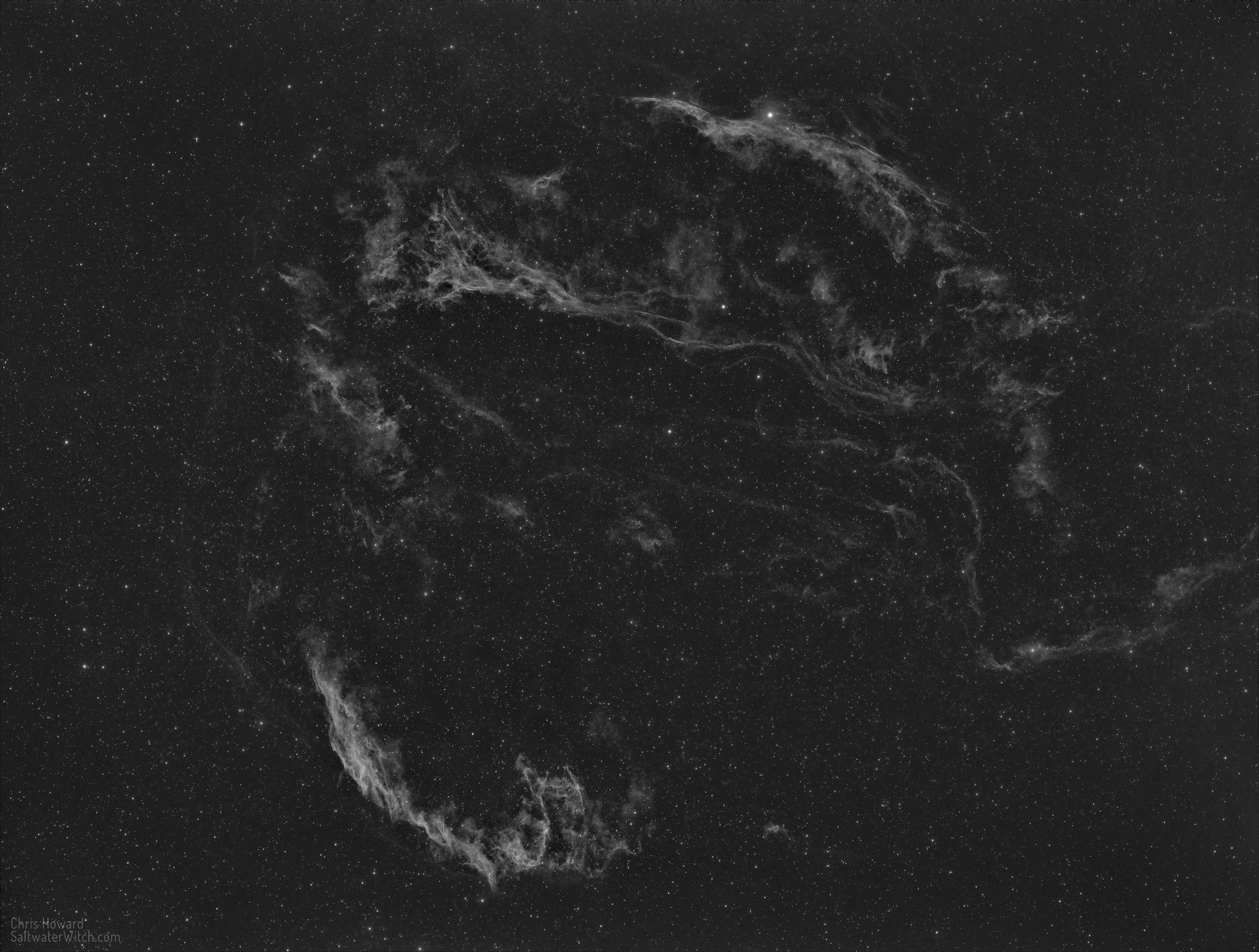 The moon is bright and the clouds are fast

So, I've been goofing around with hardware, updated NINA and plugins, getting ready for the next clear night. It's raining right now. I was looking at some narrowband data for Sharpless 2-199 (Soul Nebula) I captured late last year and reprocessed the Ha data. I am especially fascinated by the differences in depth and darkness between the background and the bands of dust and interstellar gasses that twist in front of the Soul Nebula, between us and the high-energy emission of the towering clouds of hydrogen beyond. Someone commented (I think on AstroBin) on another image of mine with similar properties—that I needed to bring up the black point, that the night sky is black. But why? Who says so? The data says the background isn't as dark as the dust, so why would I want to lose that difference? 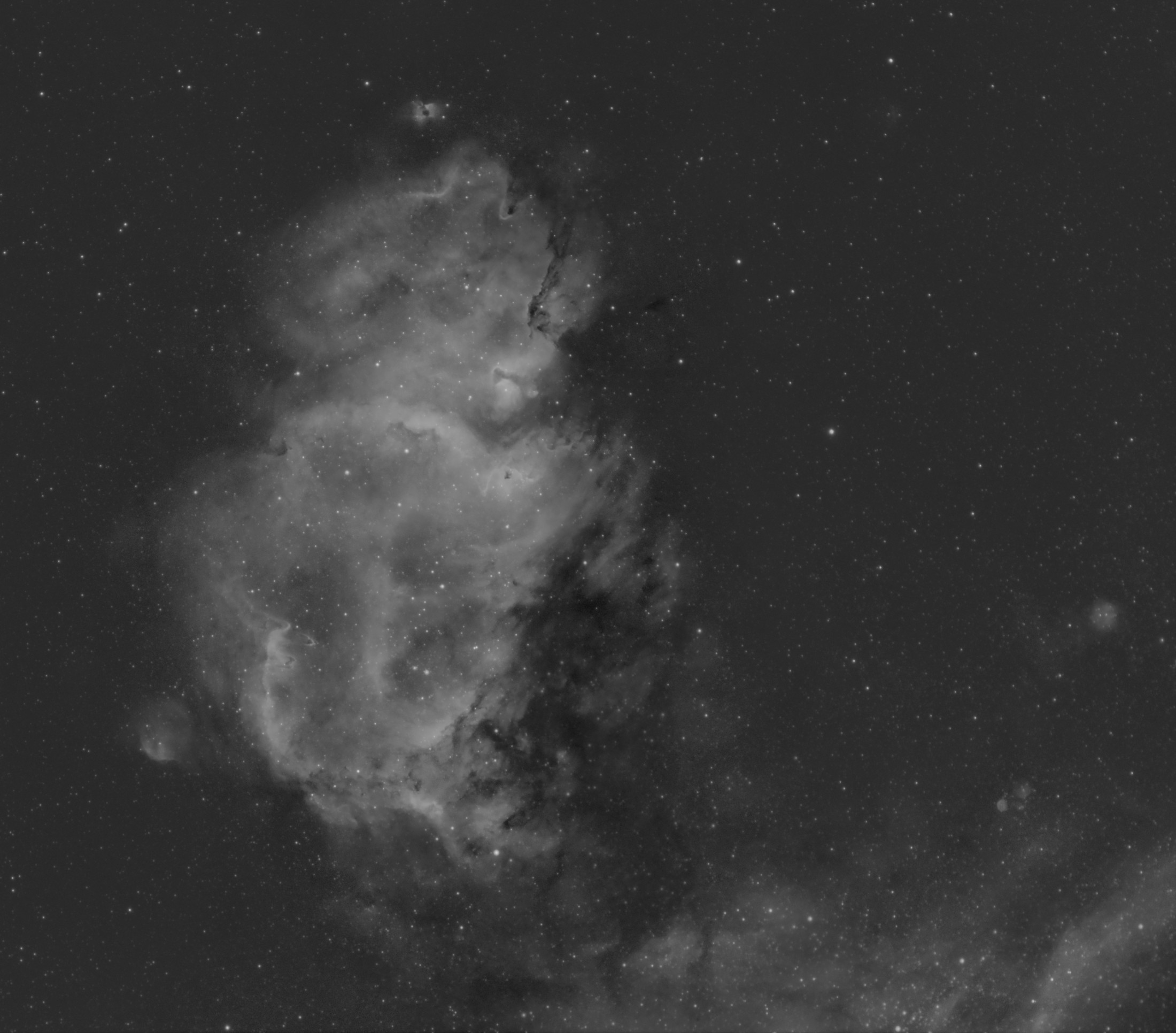 Messier 16 in Ha with the "Pillars of Creation"

The famous "Pillars of Creation" from the classic Hubble (HST) image are in the core of the Eagle Nebula (Messier 16). It's no Hubble image, but still crazy what I can capture with a 250mm refractor from my backyard in New Hampshire. Here's the famous "Pillars of Creation" Hubble image: https://upload.wikimedia.org/wikipedia/commons/6/68/Pillars_of_creation_2014_HST_WFC3-UVIS_full-res_denoised.jpg 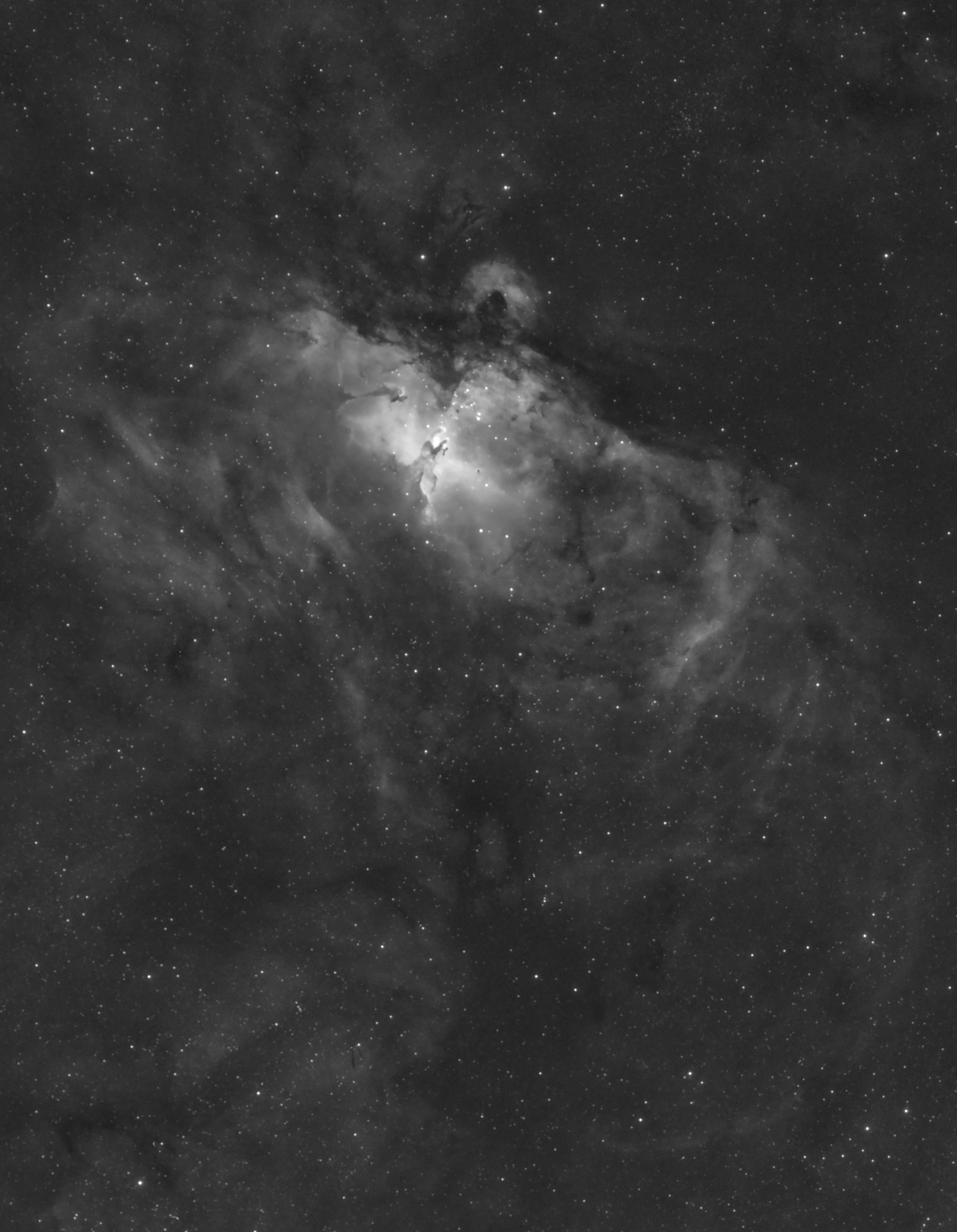 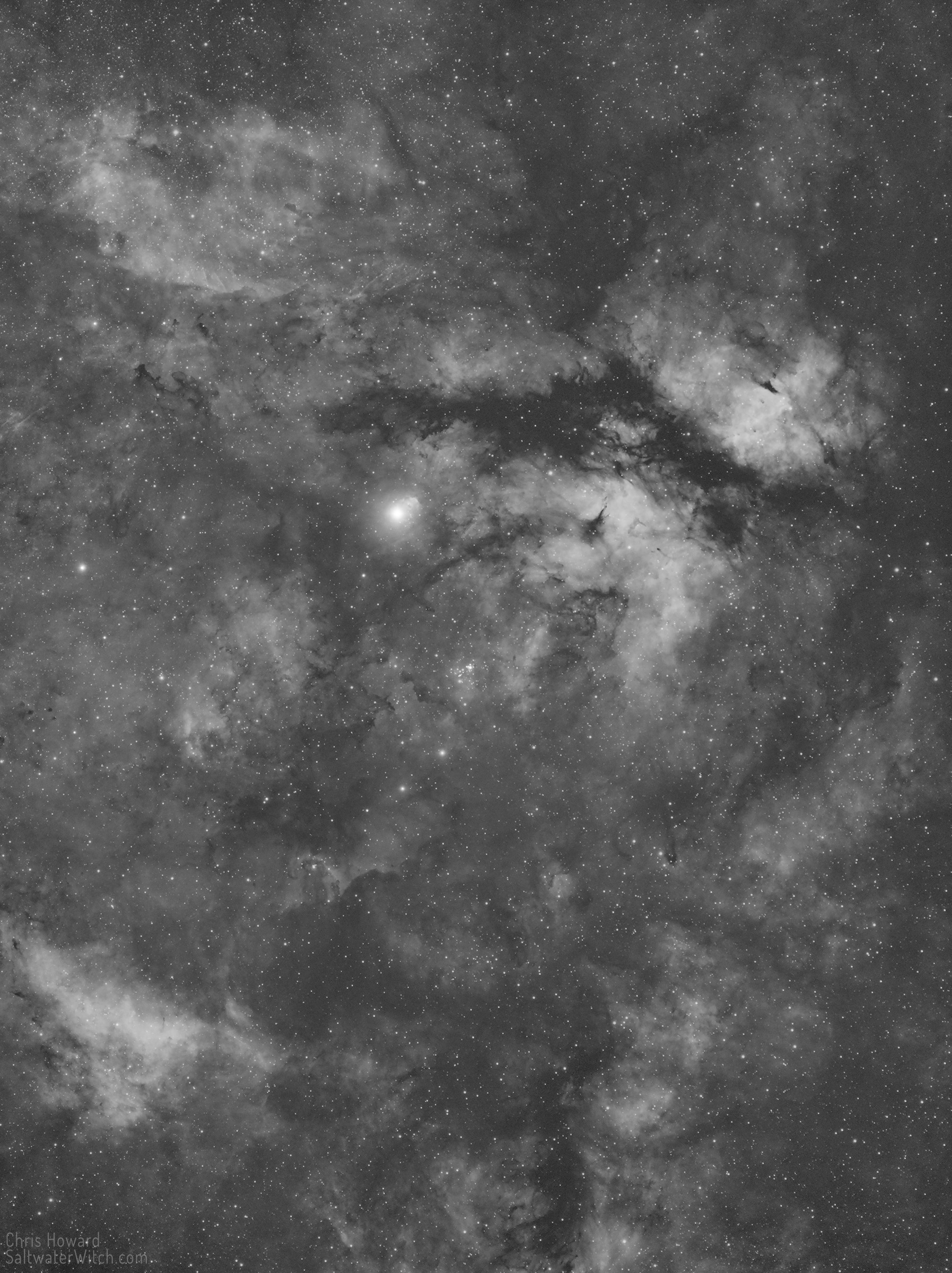 It was a night of dodging clouds and narrowband imaging...

In two parts: I spent the first half of the night on IC 1318, the "Sadr Region" at the heart of the constellation Cygnus. IC 1318 is a vast and energetic emission nebula surrounding one of the brightest stars in the night sky, Sadr (γ Cygni).  Click for the full sized image. 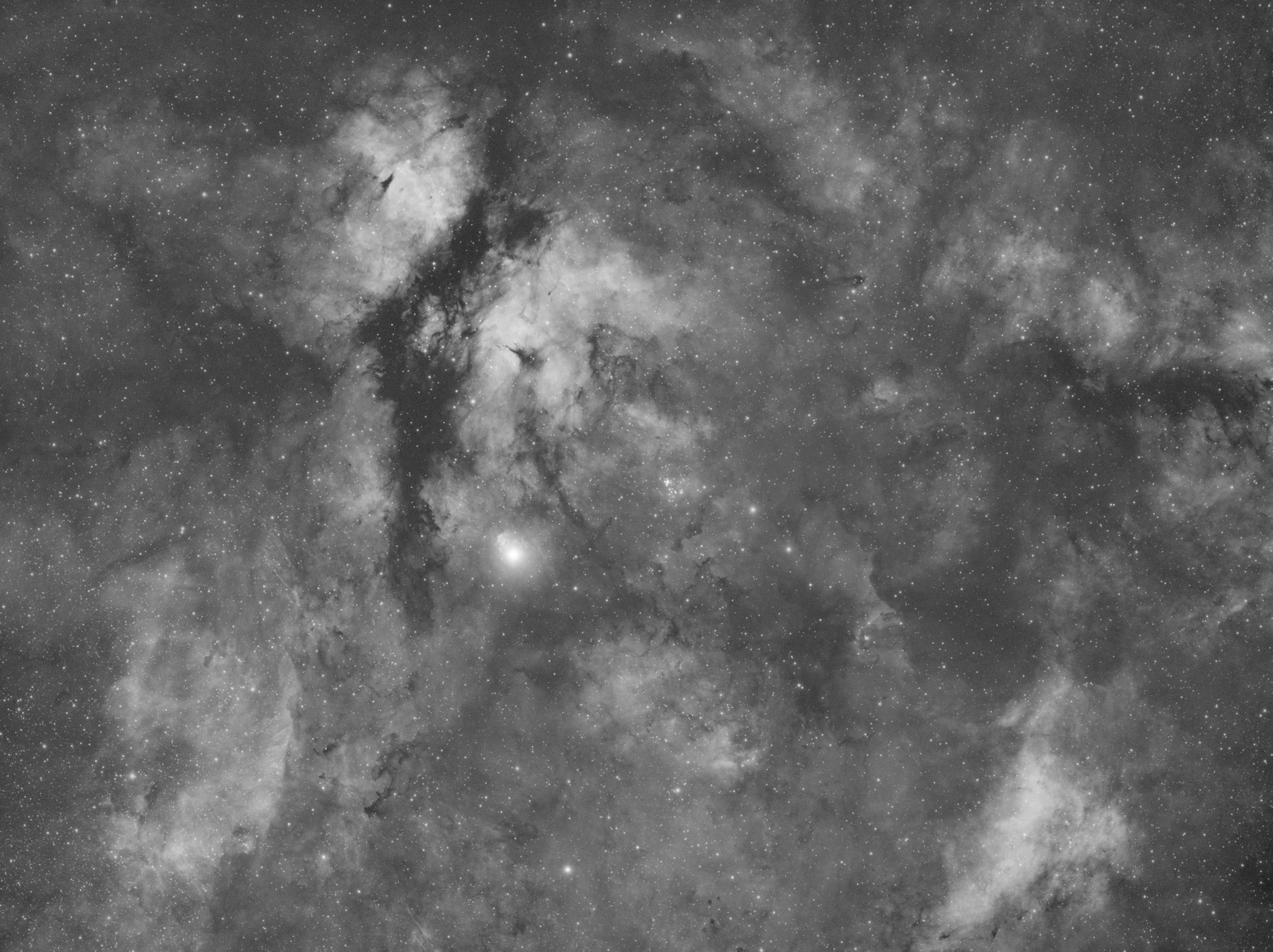 And then shifted the whole operation to the south to the constellation Serpens, just out from the Milky Way core, capturing Messier 16 (Eagle Nebula, NGC 6611), the bright nebula on the left side, and M17 (Swan Nebula, NGC 6618) on right. 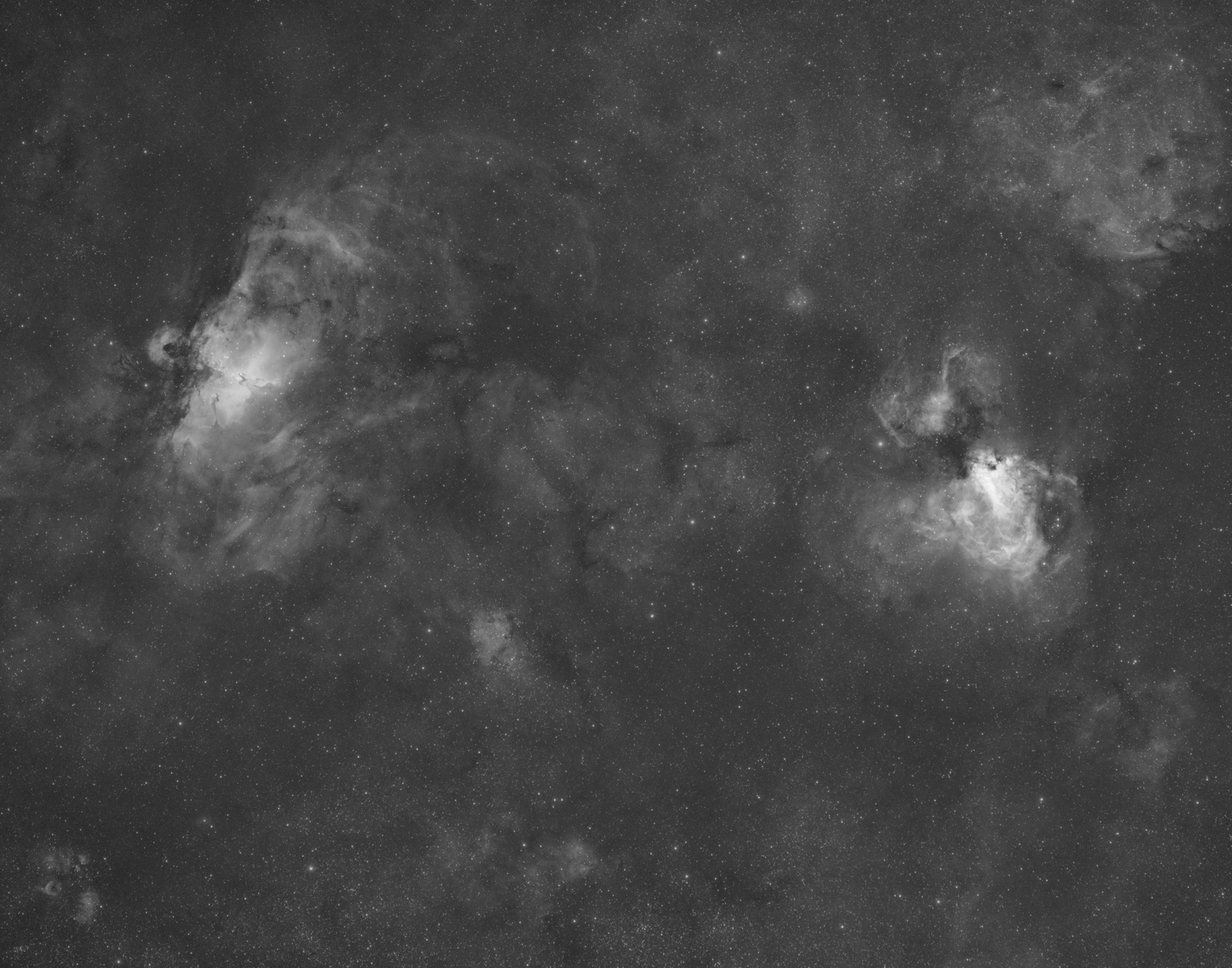 Here's last night's astro-imaging session captured in one image. You can see a couple batches of clouds swept through at different times. The AllSky cam, sitting on a concrete block next to the telescope, takes pictures all night long with a 6mm super-wide-angle lens. In the morning there are a bunch of time-lapse images of the night, and in this "star trails" image, all the separate images from the night are merged into one image, showing the earth's rotation. You can also see some red LED arcs (bottom left) showing where my telescope slewed or tracked a target across the sky. That bright quarter-circle in the center of the rings of star trails is Polaris, the "North Star", alpha Ursae Minoris. Polaris is a few degrees off the NCP--North Celestial Pole, a point in space that marks our planet's rotation in the northern hemisphere (you'll see the SCP in the southern hemisphere, although there isn't a bright star nearby like Polaris). Here's how to think about this: if you extended an imaginary line out from Earth's axis of rotation and you're north of the equator, the line would end, from our perspective, right there at the NCP. You can see that the star Polaris isn't dead-on with the NCP because it too rotates around it. 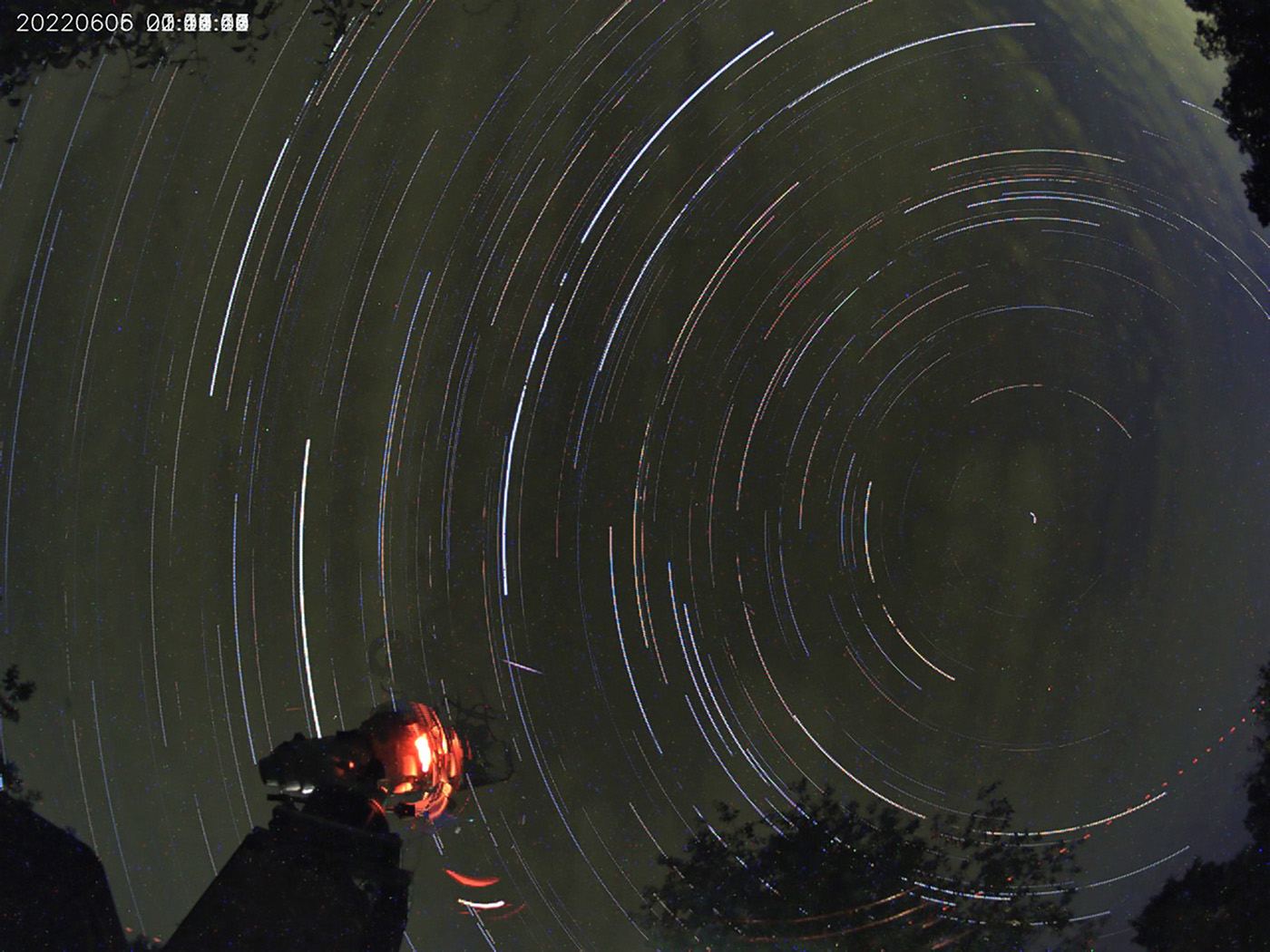 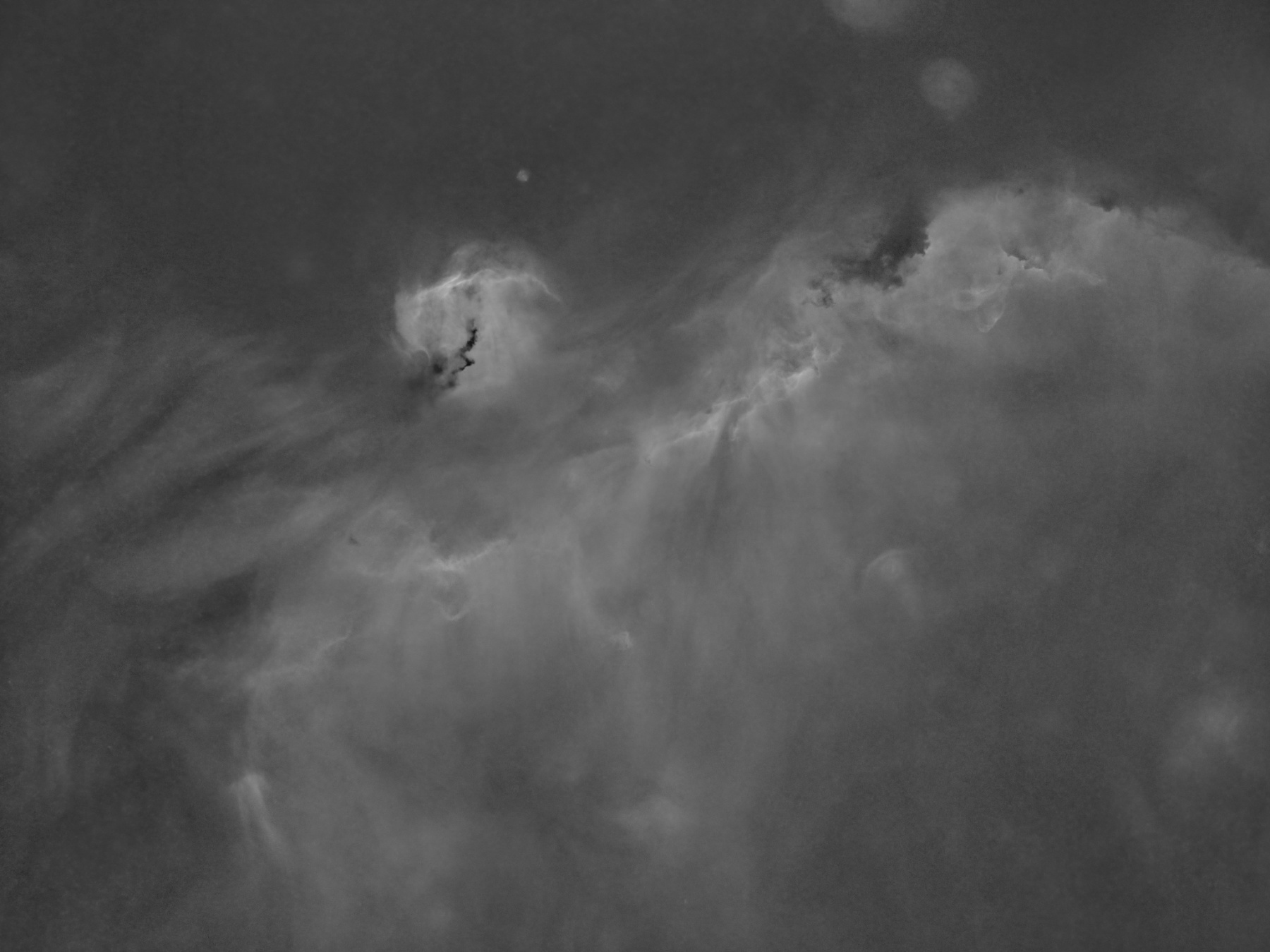 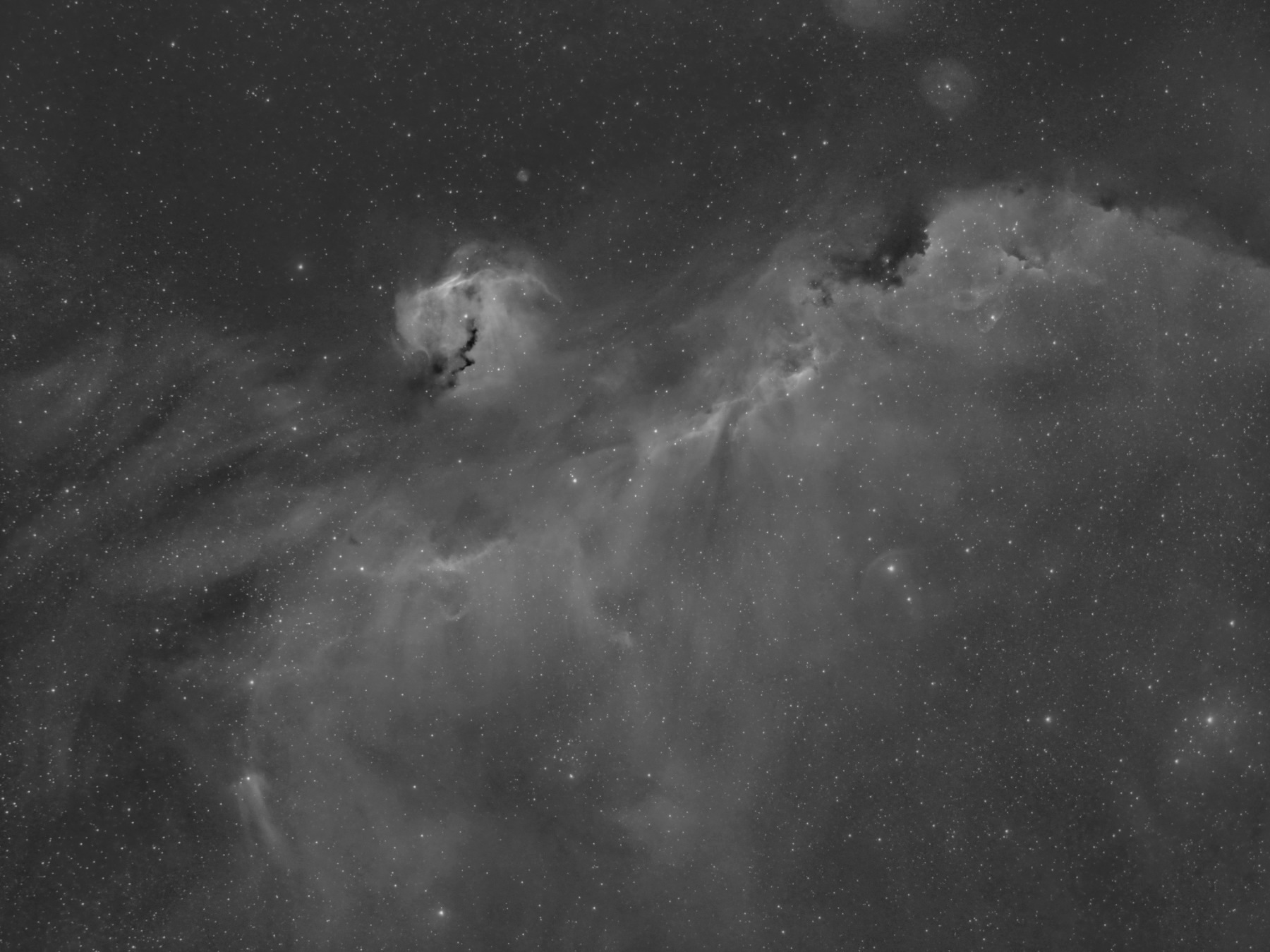 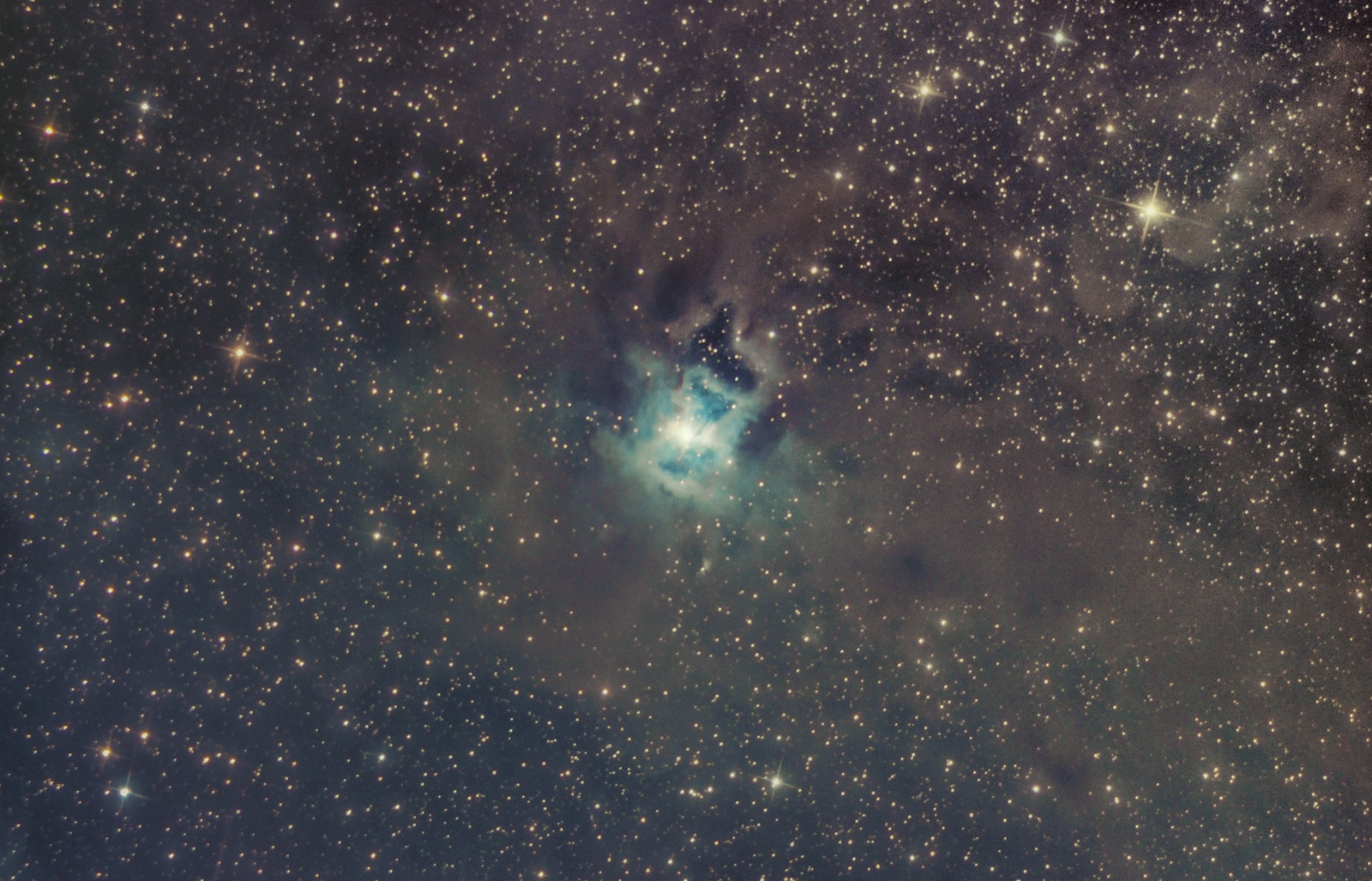