Eagle Nebula - wide-field view with a side-order of infrared

Here's another one from last night's run, a wide-field view of the Eagle Nebula (M16, NGC6611) in IR-OIII-Ha with Ha luminance. From our perspective Messier 16--Eagle Nebula--sits just north of the Milky Way's dense core of stars, bands of clouds, dust, hydrogen, and other galactic detritus. I wasn't very hopeful with the IR subs, but the Ha subs were beautiful. The OIII frames were about what I expected--not too much but enough to include them. To brighten things up I went back and added the processed Ha stack as a luminance layer. Yes, this may be a spectacularly weird color arrangement, but we're working in false color imaging already, and this doesn't seem that far off from our galaxy's actual core colors--at least in terms of the bands of dust and ionized gases. 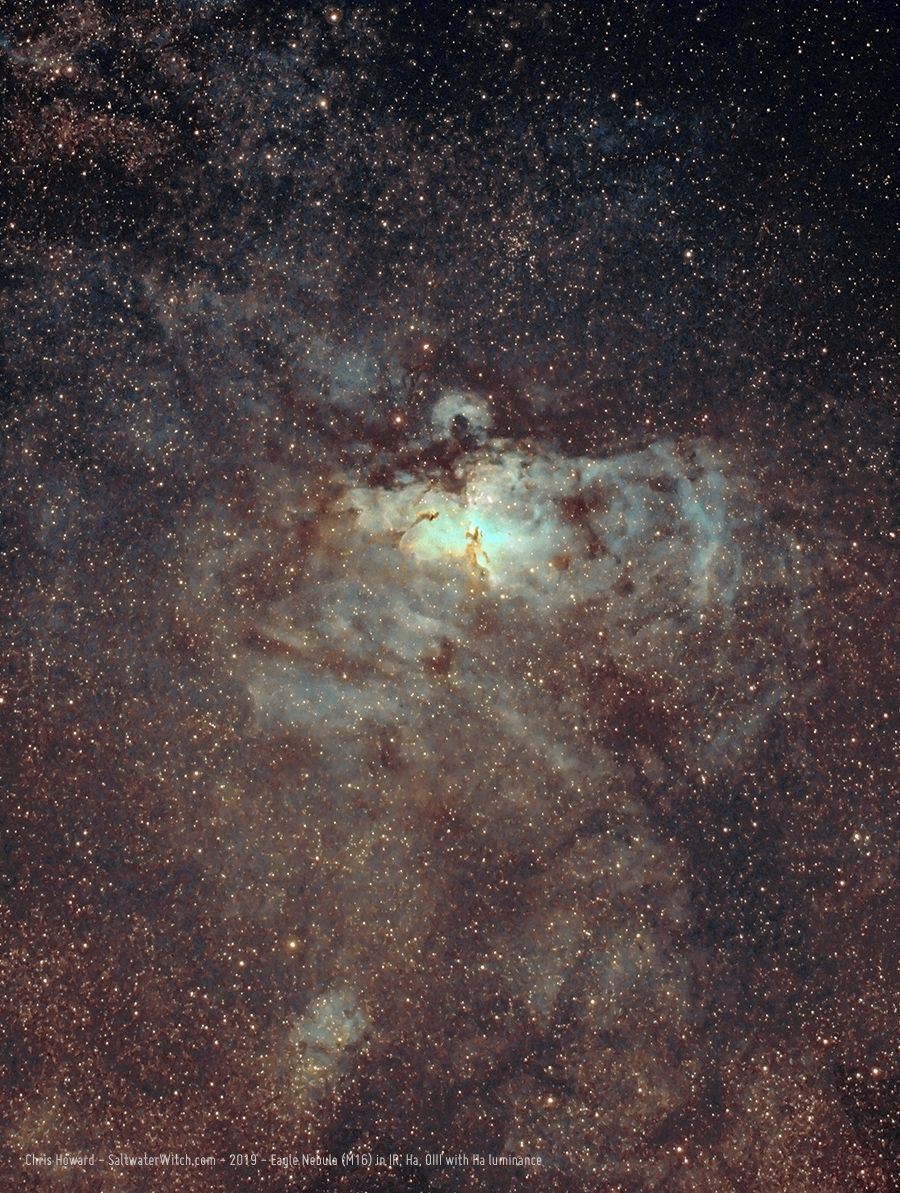 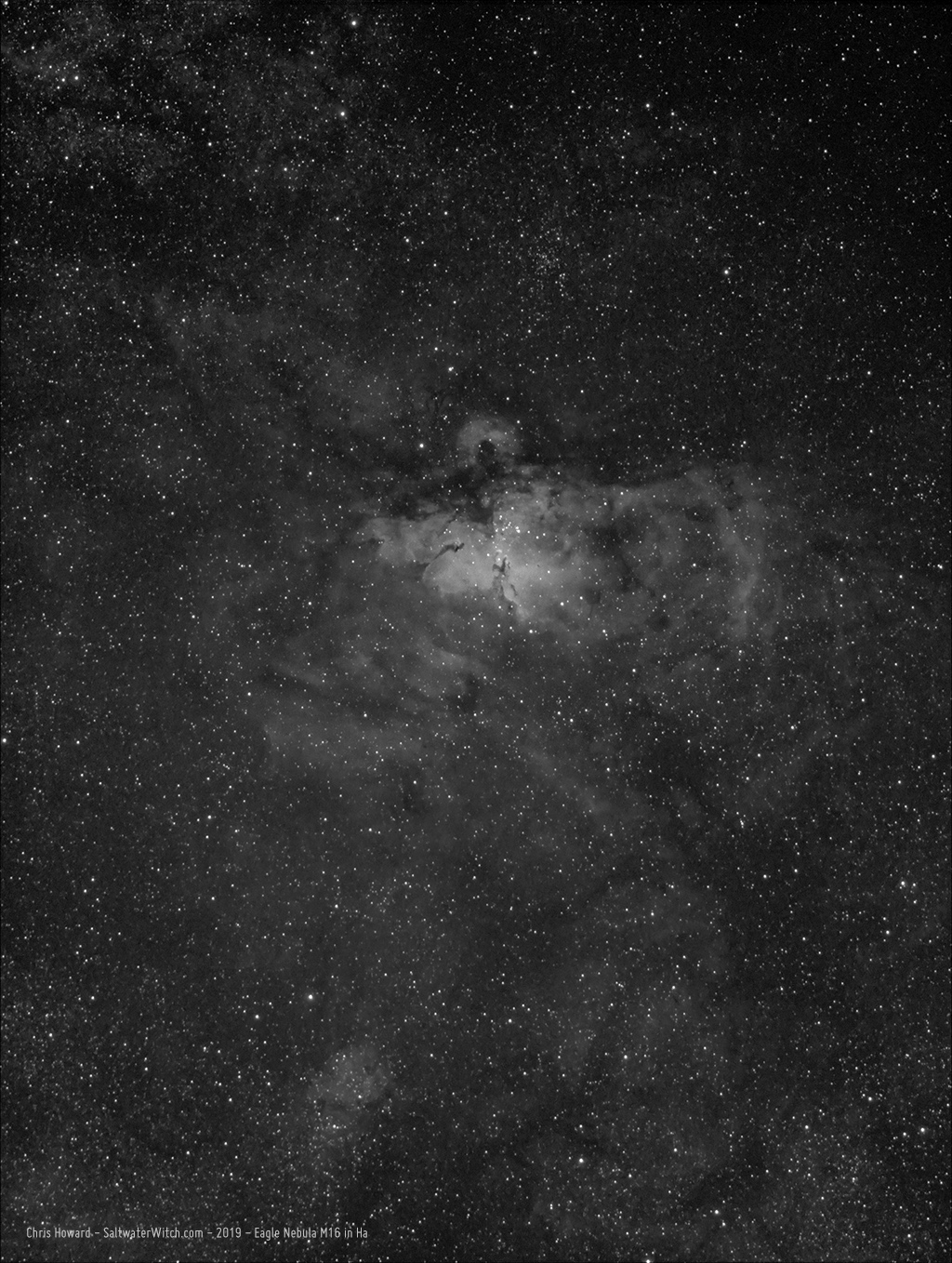 For comparison (with NGC 6611 above), here's the processed version of the Eagle Nebula (M16) I took last year with a slightly different setup--same William Optics scope + Atik414EX mono CCD camera. This is a bi-color hydrogen-alpha and oxygen3. With this one I think I had my OIII frames mapped to G and B channels, and Ha mapped to the Red channel. 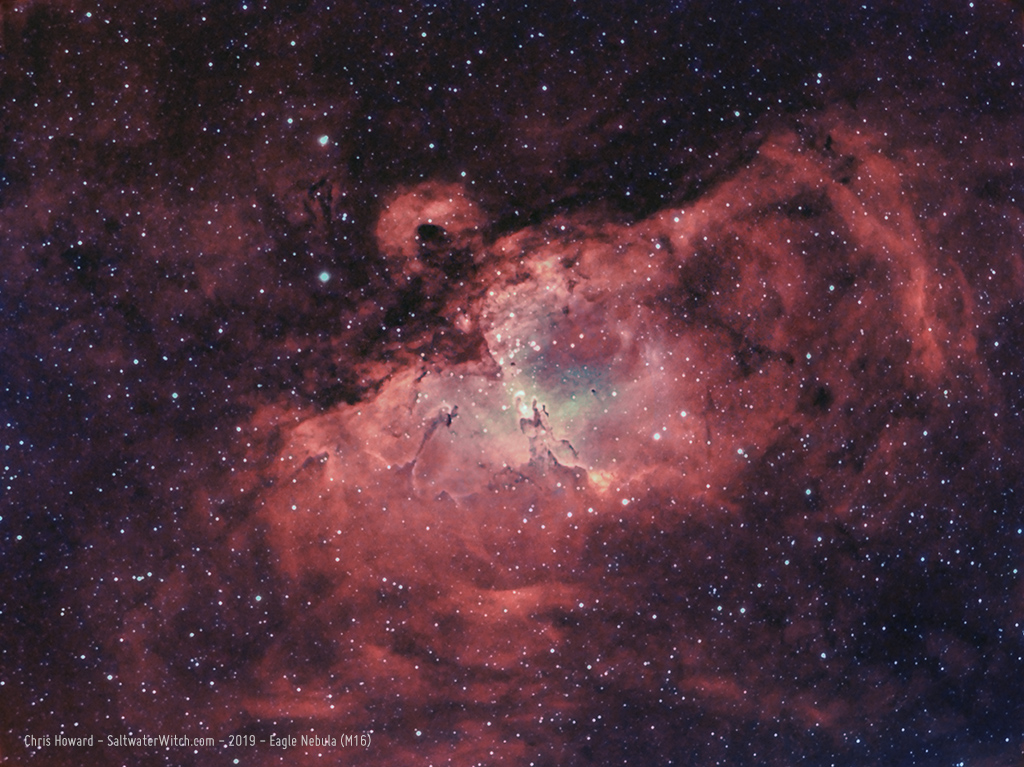 The Eagle Nebula (Messier 16, NGC 6611, Star Queen Nebula) is an open star cluster and emission nebula in the constellation Serpens, about 7000 lightyears away from us. Imaging Info: 96 x 240 sec. Ha + 42 x 240 sec. OIII frames stacked in DSS, processed in PSCC2018. These frames were taken over several nights. You can see the numbers are a bit unbalanced, but the clouds moved in during the OIII sequence last night, and there was nothing I could do. I went ahead and stacked and processed them as they are. I'll probably come back to this one in the future with more oxygen-3 (and maybe sulphur-2) to achieve something like the actual proportional levels of light from the nebula across these bandpasses. Equipment: William Optics ZS61, Atik 414EX mono CCD, 12nm Astronomik Ha filter, 12nm Astronomik OIII filter, CEM25P EQ Mount, ZWO ASI120MM-S Guide Cam + Orion TOAG, INDI/KStars/Ekos control software. Location: Stratham, New Hampshire, Bortle: 4, SQM: 20.62 https://www.astrobin.com/353803 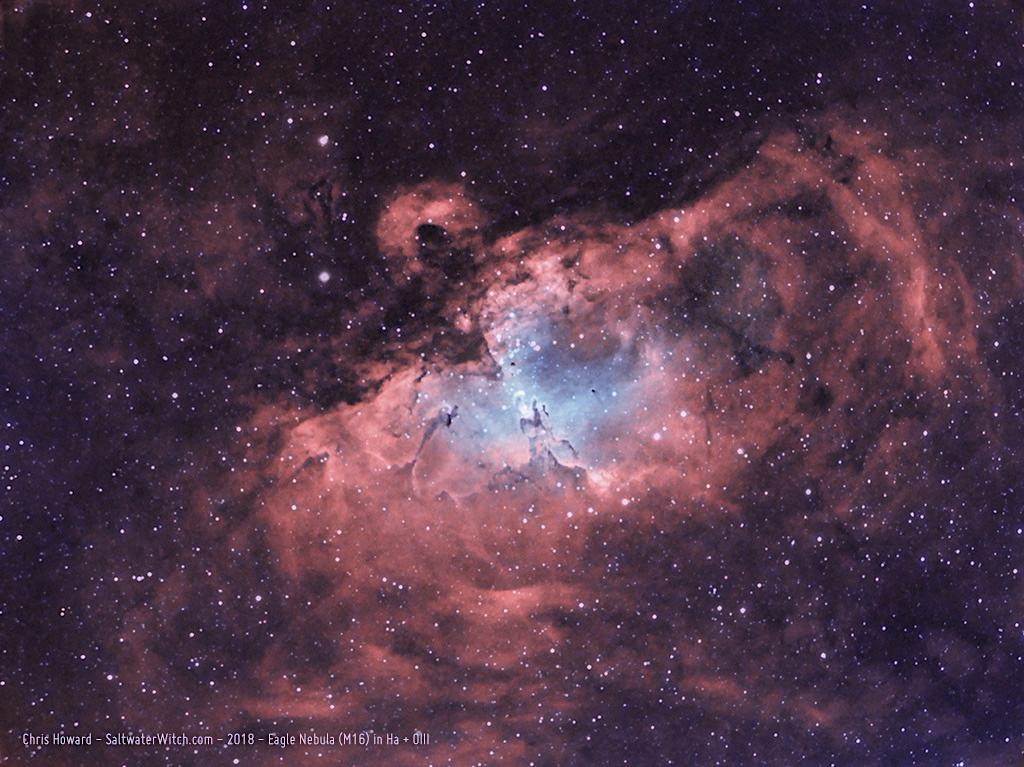 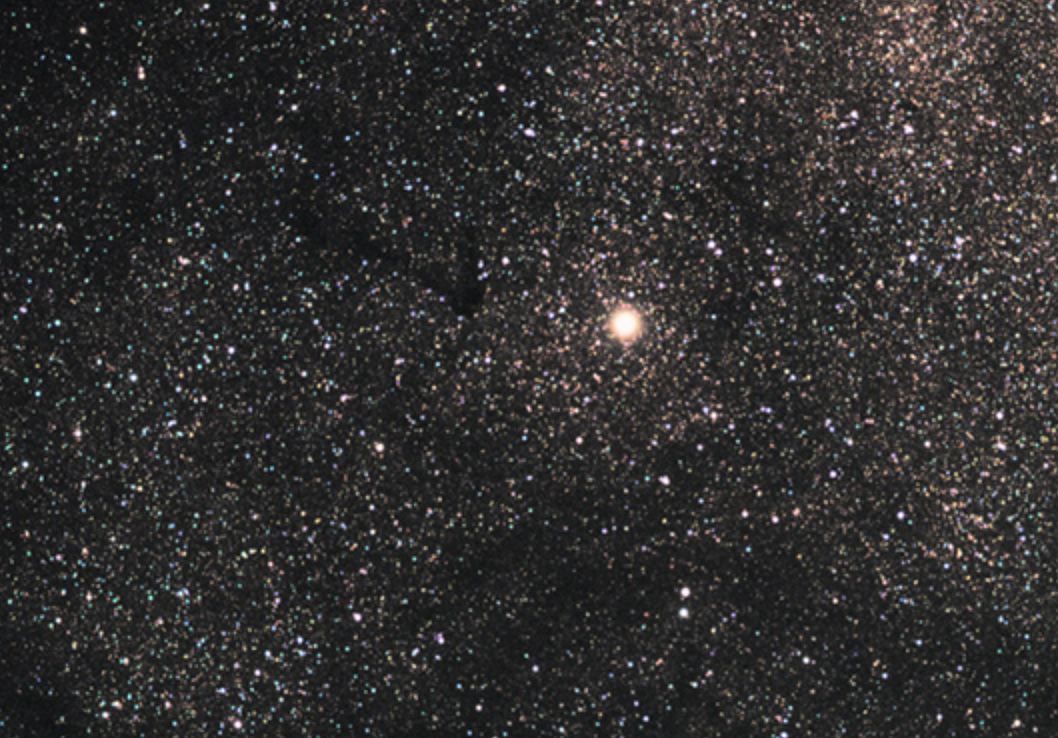 How about a little Voldemort with your Astronomy? Here's Barnard 104, the Fish Hook Nebula (backward checkmark nebula was already taken?), just left of the star beta Scuti in the constellation Scutum--along with several other absorption nebulae in the Barnard Catalogue, 113, 111, 110, 107, and B106. (See the image below). These are the dark cloudy regions across the middle, which stand out against the glow of a billion stars in this area of the Milky Way Galaxy. (Okay, I'm being a bit deceptive with the drama there. It's probably more like 5 or 10 billion). Oh, and let's not forget NGC 6704, the open star cluster toward the bottom in the center. A note on the "Barnard Catalogue", which is what I've always called it: I just found out the official name for it is the very Harry Potter sounding, Barnard Catalogue of Dark Markings in the Sky. Go home, Death Eaters! The star gazing geeks got here first! (ZWO ASI071MC cooled CMOS camera at -10°C, iOptron CEM25P EQ mount, William Optics ZenithStar 61 f/5.9, 12 x 120 sec. sub exposures, stacked in DSS. Location: Stratham, New Hampshire, US. Bortle 4). 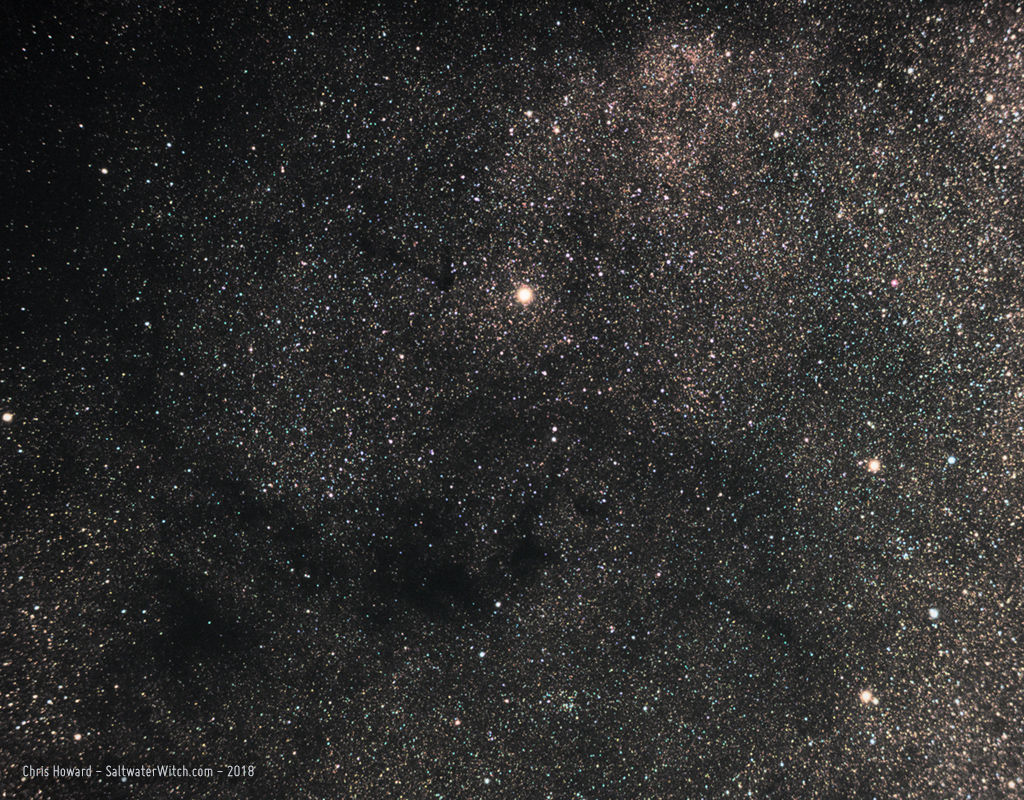 So, all in all, a successful night of astronomy stuff, even with the clouds rolling in around 2 am. Here are a couple more wide-field shots from the session, the Eagle Nebula and the Sadr Region--the diffuse nebula (IC 1318) around gamma Cygni, also called Sadr (center star in the constellation Cygnus). 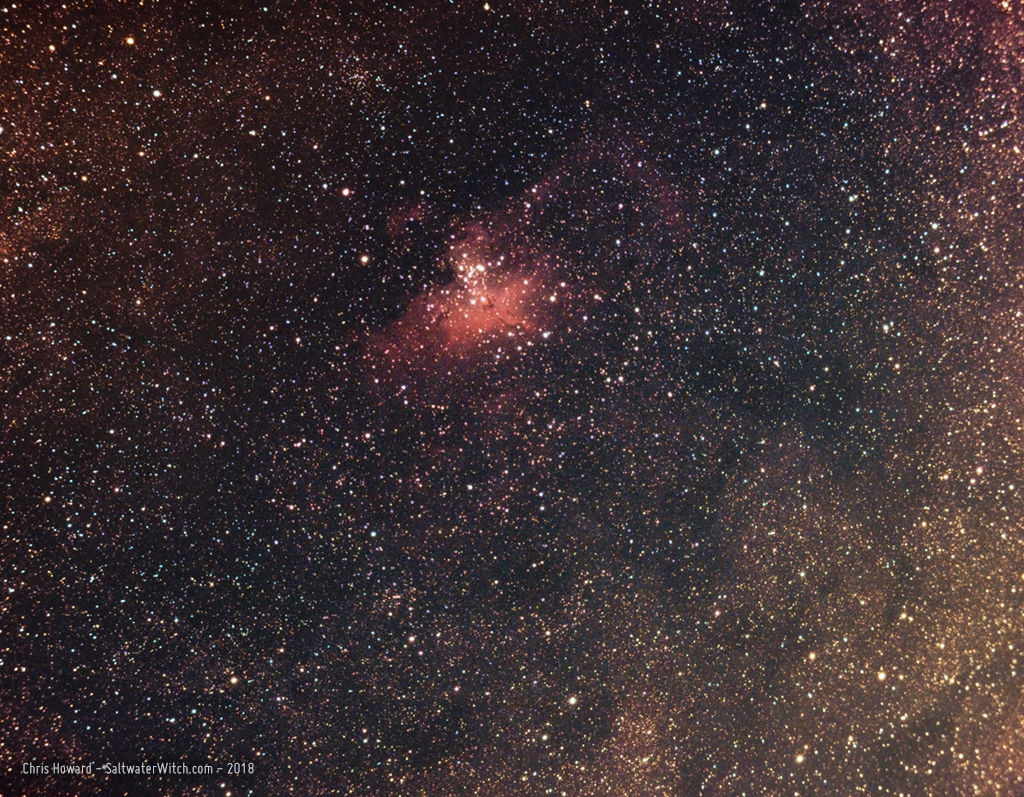 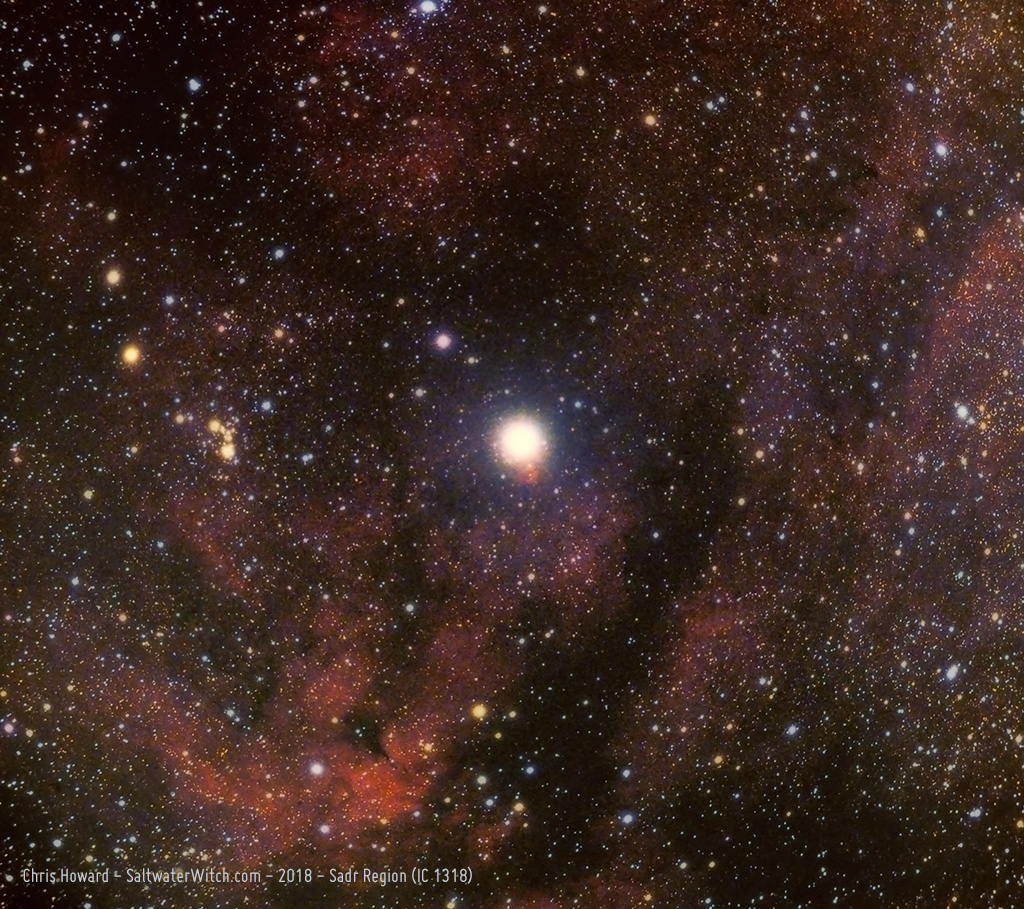 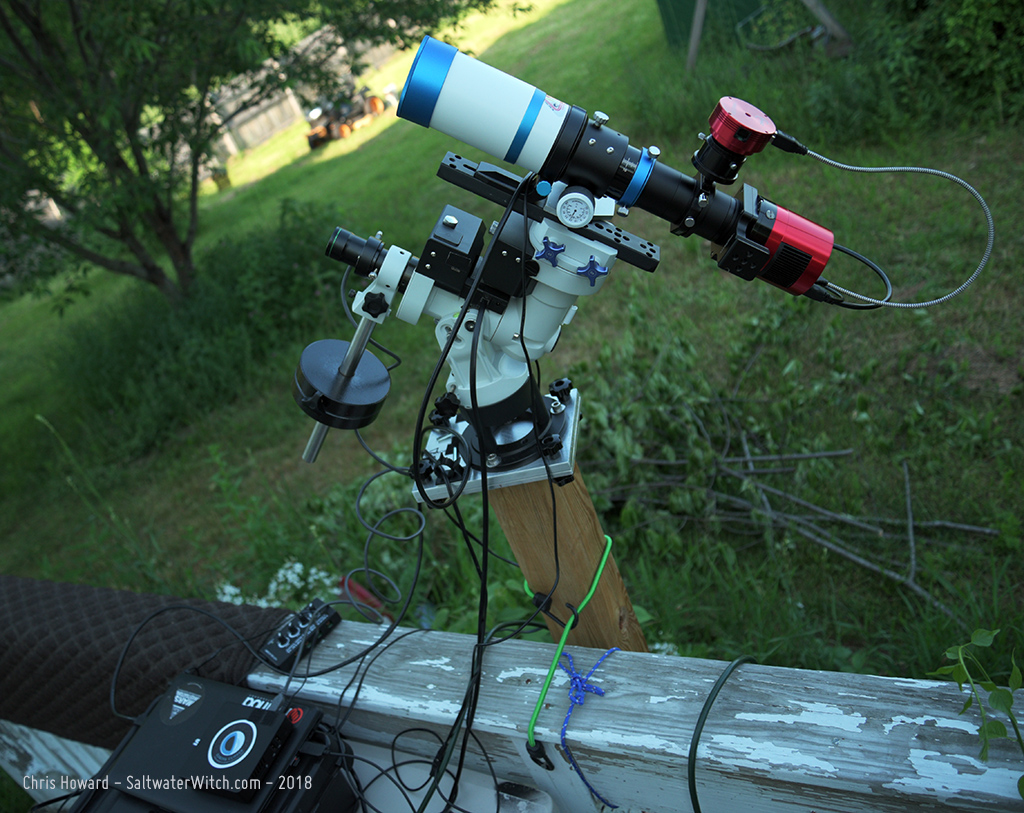 I spent a few hours last night dialing in the Orion "TOAG" or Thin Off-Axis Guider, which I bought a couple years ago, but have never been able to get working properly. I've tried seven or eight times, added it to my imaging train a couple times a year, attempting to get things working without success. Well, I went at it again last night, and you know what? It came together. I still have some weirdness to tinker with--to work out, but for the first time I wasn't guiding with a separate scope. I was guiding at the same focal length as the ZS61 using a pick-off prism that directs a portion of the field of view up into the guide camera. Here's the setup I used last night to dial-in the distance between the primary camera and guide camera, and then bring everything into focus. I ended up with some pretty cool shots, but my main purpose was to get Off-Axis Guiding (OAG) adjusted and working--and that was with me slewing around the sky to clear areas between banks of clouds to find some halfway interesting targets. In this setup I'm using my trusty ZWO ASI120MM-S for guiding, and the ZWO ASI071MC cooled color camera for the primary. The goal here is to be able to guide (track the motion of the earth against the star field to a very fine degree, and make small incremental adjustments to the EQ mount) so that I can take long exposures without worrying about the external guidescope issues I know all of you care deeply about, like field rotation and differential motion between a guide scope and imaging telescope. I have been able to take 20 minute exposures with a guidescope and camera, but the stars are not as sharp as I would like--think pressing down the button of your camera and holding the shutter open for 20 or 30 minutes and have everything in the field of view remain in sharp focus. That's essentially what the guiding system accomplishes, taking continuous images of the stars and feeding them to some pretty sophisticated software that controls the motion of the equatorial mount (that's the white z-shaped device with the black boxes on which the telescope is fastened and balanced).