If you're looking for my old Astro Journal with my Equipment and Astro Automation pages: https://SaltwaterWitch.com/astronomy
Here's my Youtube Channel

Here's the view a few steps from our front door, with Comet C/2020 F3 (NEOWISE) still very clear in the sky, and if you can shoot 10 - 20 second exposures on your camera, even better! That's Ursa Major (the Big Dipper) at the top center--most of it. This is 24mm on the Nikon D750, and it's pretty close to what you will see with your eyes. 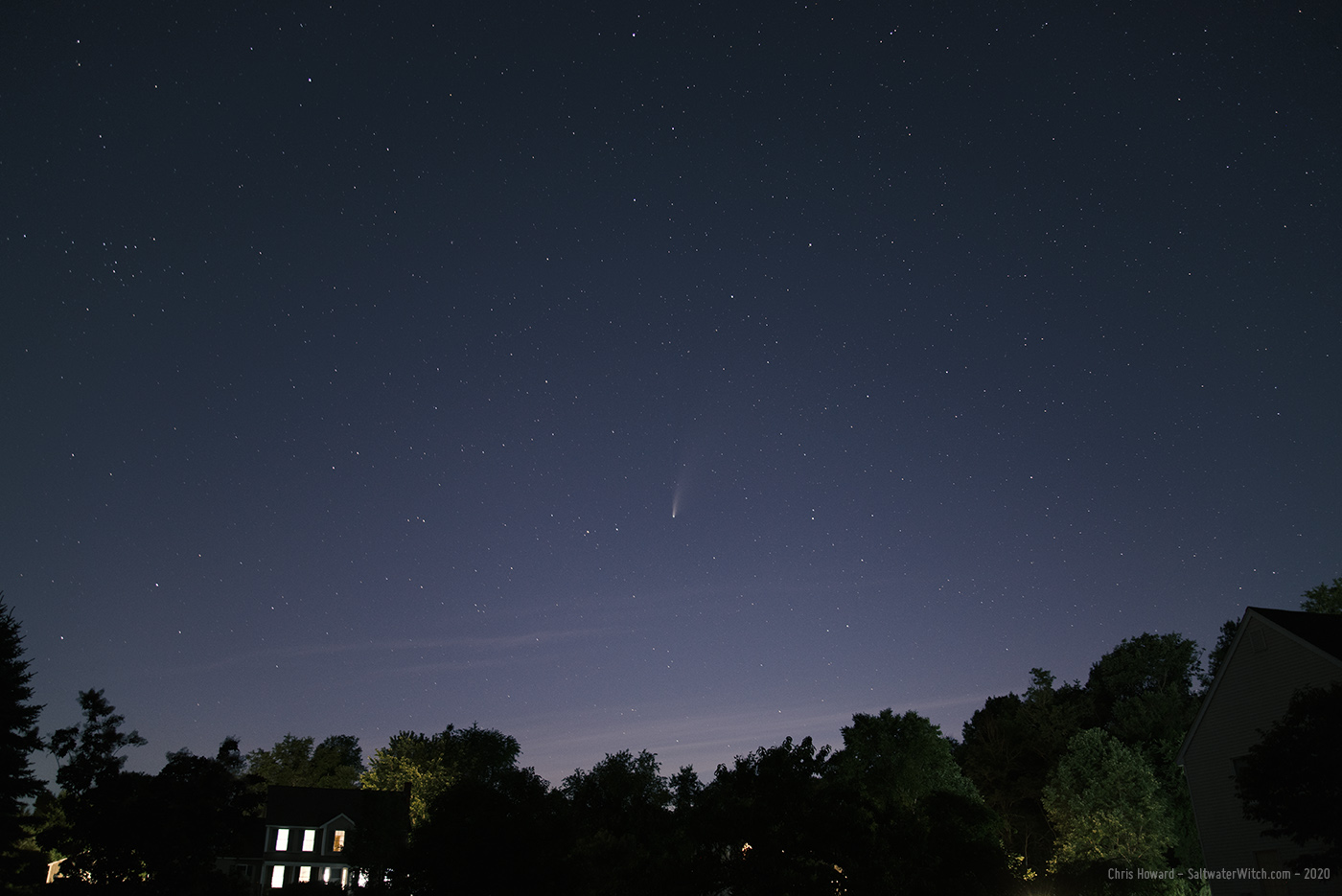 Here's another, using the car roof to keep the camera still: 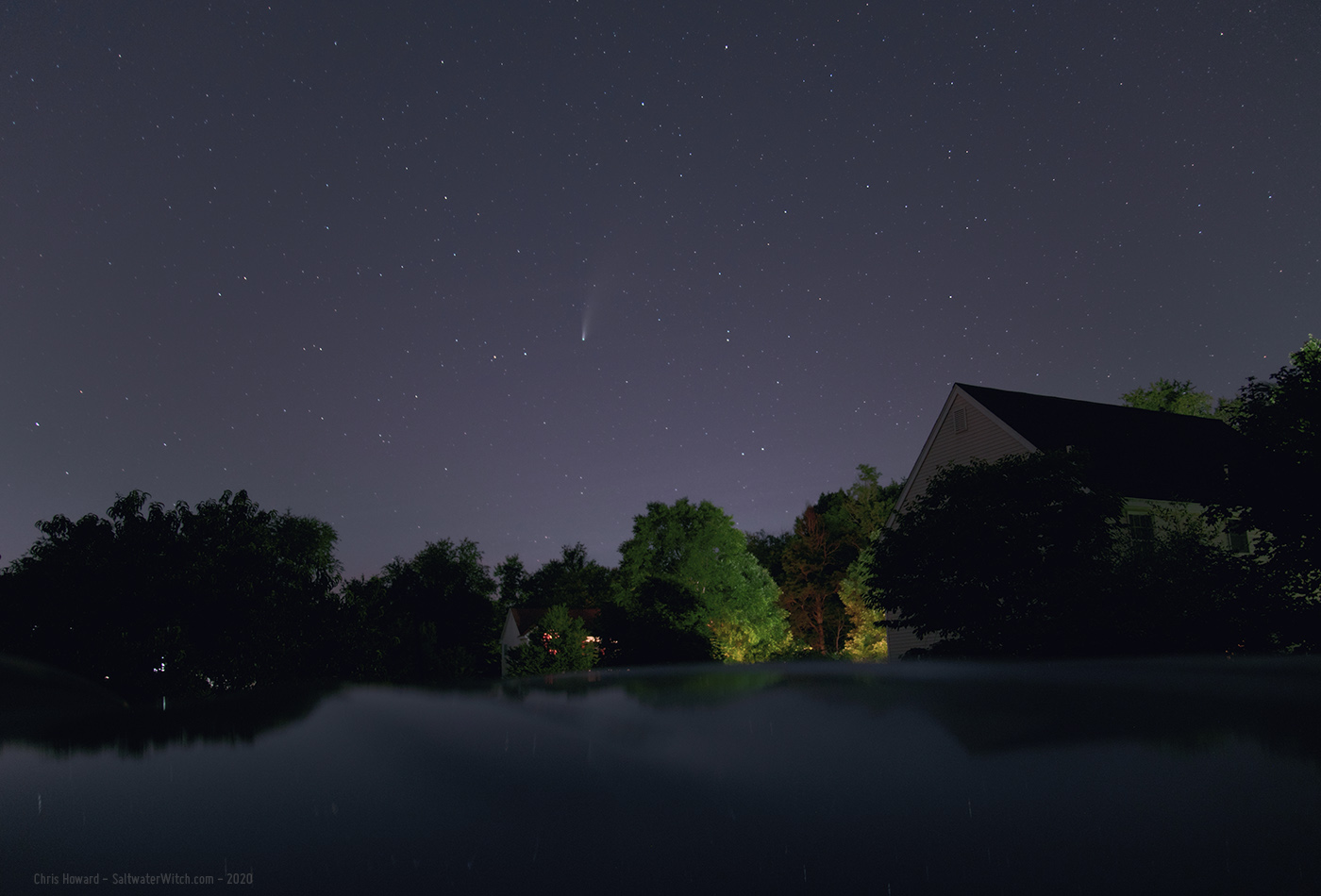 Something to think about on a Friday night: the Andromeda Galaxy (M31) is moving toward our galaxy, the Milky Way, at a little over 400,000 kilometers per hour, and the supermassive black hole at the center of Andromeda is 100 million times the mass of our sun. Note: at that speed Andromeda will still take 4 billion years to get here. I figure we'll be beyond Kardashev 3 in the next 3 - 4 million years, and we'll simply move our galaxy out of the way. 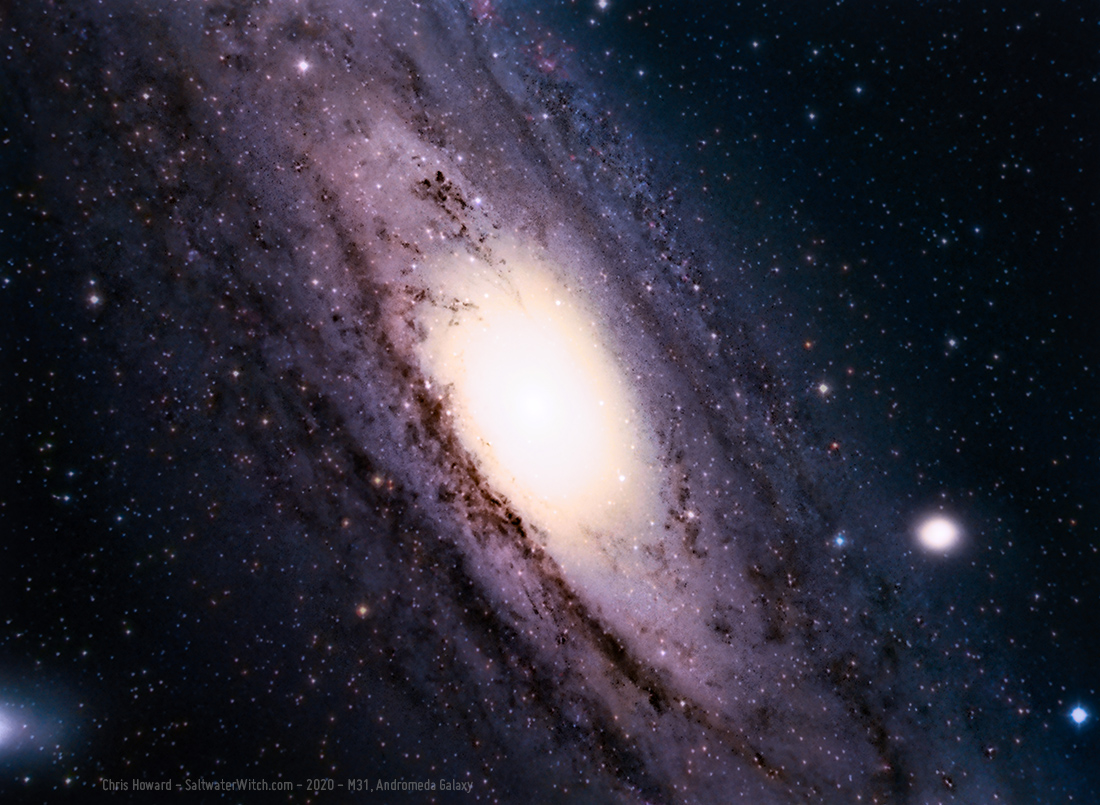 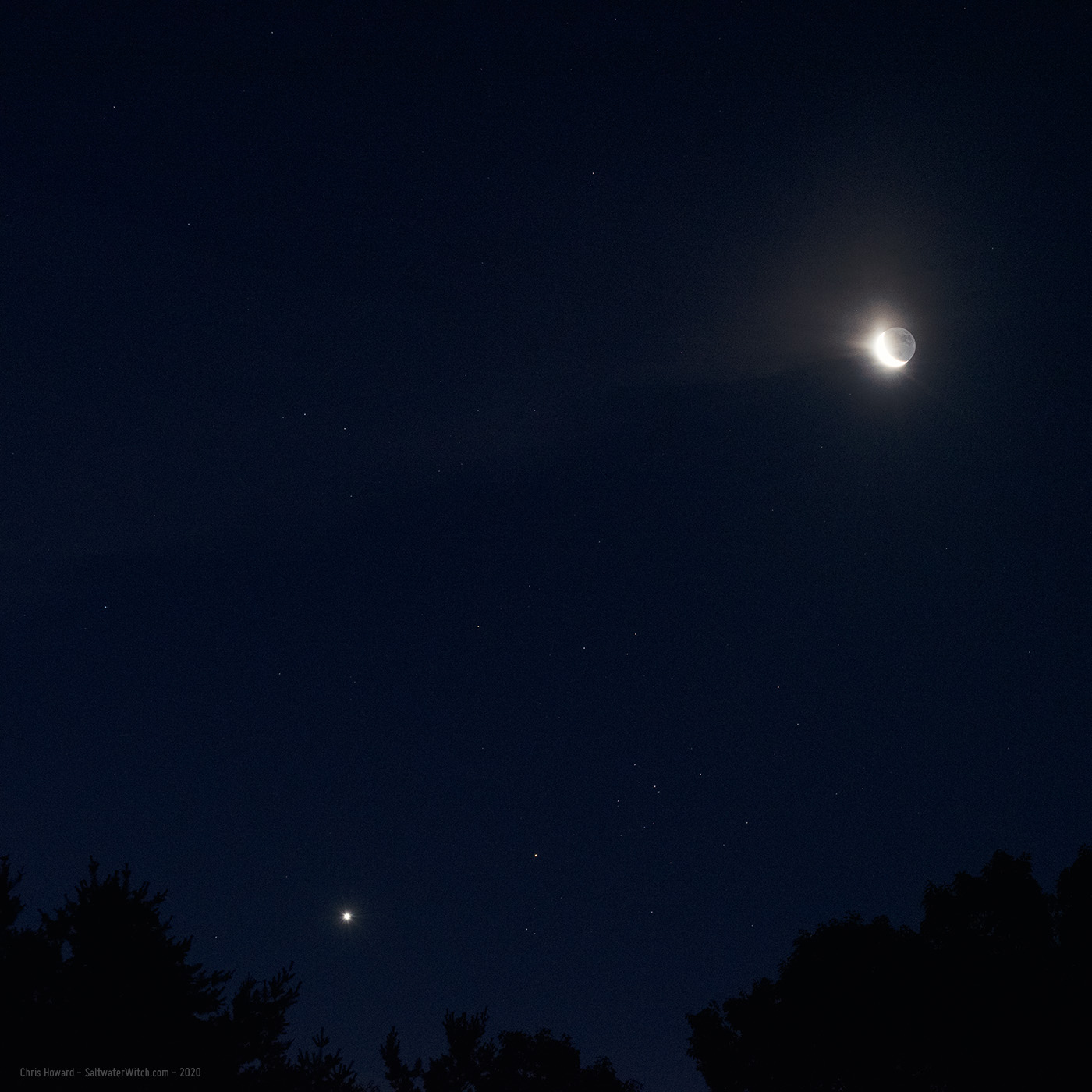 Here's another crop from the stacked 41 x 240 second subs of the North America Nebula (NGC 7000) in Ha, this time the "Gulf of Mexico" region, with some fantastic dark nebulae. This is a slightly narrower field of view than the Cygnus Wall, and so we're only looking at about 100 trillion miles from one side to the other. When you read that atomic hydrogen, the lightest element, makes up 75% of the baryonic mass of the universe, this is what they're talking about. Almost everything you see in this frame, dark and light clouds--even the stars, is hydrogen in various forms. 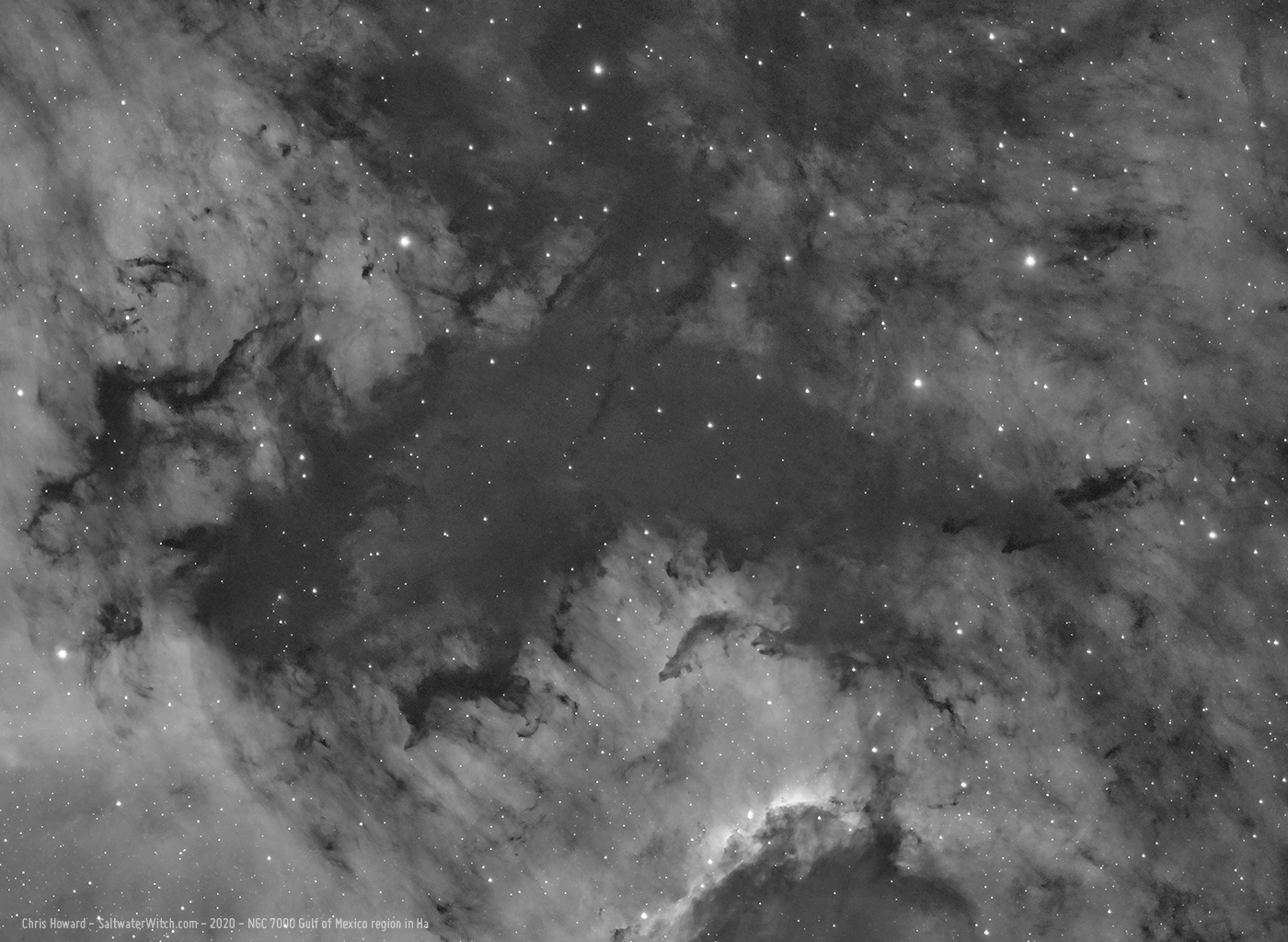 I'm going to retake the last set of hydrogen-alpha frames for NGC7000 because the stars are a bit wonky, but the clouds of ionized hydrogen and massive structures of dark interstellar dust still look beautiful in this stacked set of 41 exposures. Here's a crop of the "Cygnus Wall" in NGC 7000. In this field of view, you're looking at about 118 trillion miles of dense clouds of interstellar ionized hydrogen. NGC 7000 is about 1600 lightyears aways, and the "Cygnus Wall" is about 20 light years long--about 118 trillion miles. 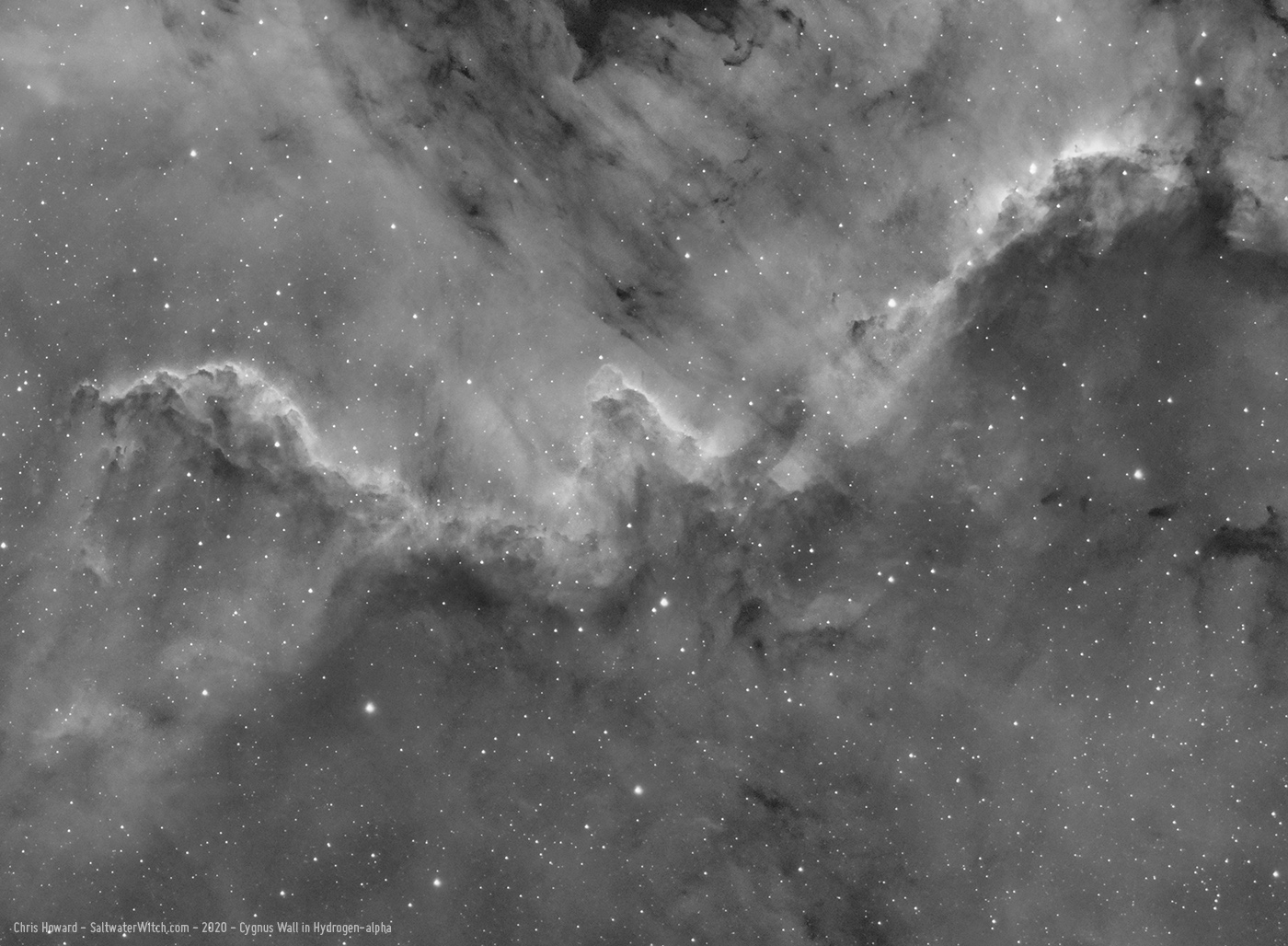 The IC 1396 region: IC 1396A is the Elephant's Trunk Nebula (center) surrounded by knots and bands of dark interstellar dust. Barnard 163 (B163) is the dark nebula center top. When it comes to narrowband imaging (Ha, OIII, SII) the constellation Cepheus is one of my favorites. I could spend a month just on IC 1396, the whole region, capturing the dozens of dark nebulae and the Elephant's Trunk at different focal lengths, but Cepheus also has the Iris Nebula and a bunch of other cool nebulae, including Barnard Catalogue objects like B169, as well as LDN 1272 and the wisps of hydrogen clouds that make up Sh2-134. All worthy targets for your telescope and camera. Notes: 48 x 240 second subs of Ha and OIII, William Optics GT81 Apo refractor, ZWO ASI1600MM-Pro mono camera, Astronomik filters, iOptron CEM25P mount. 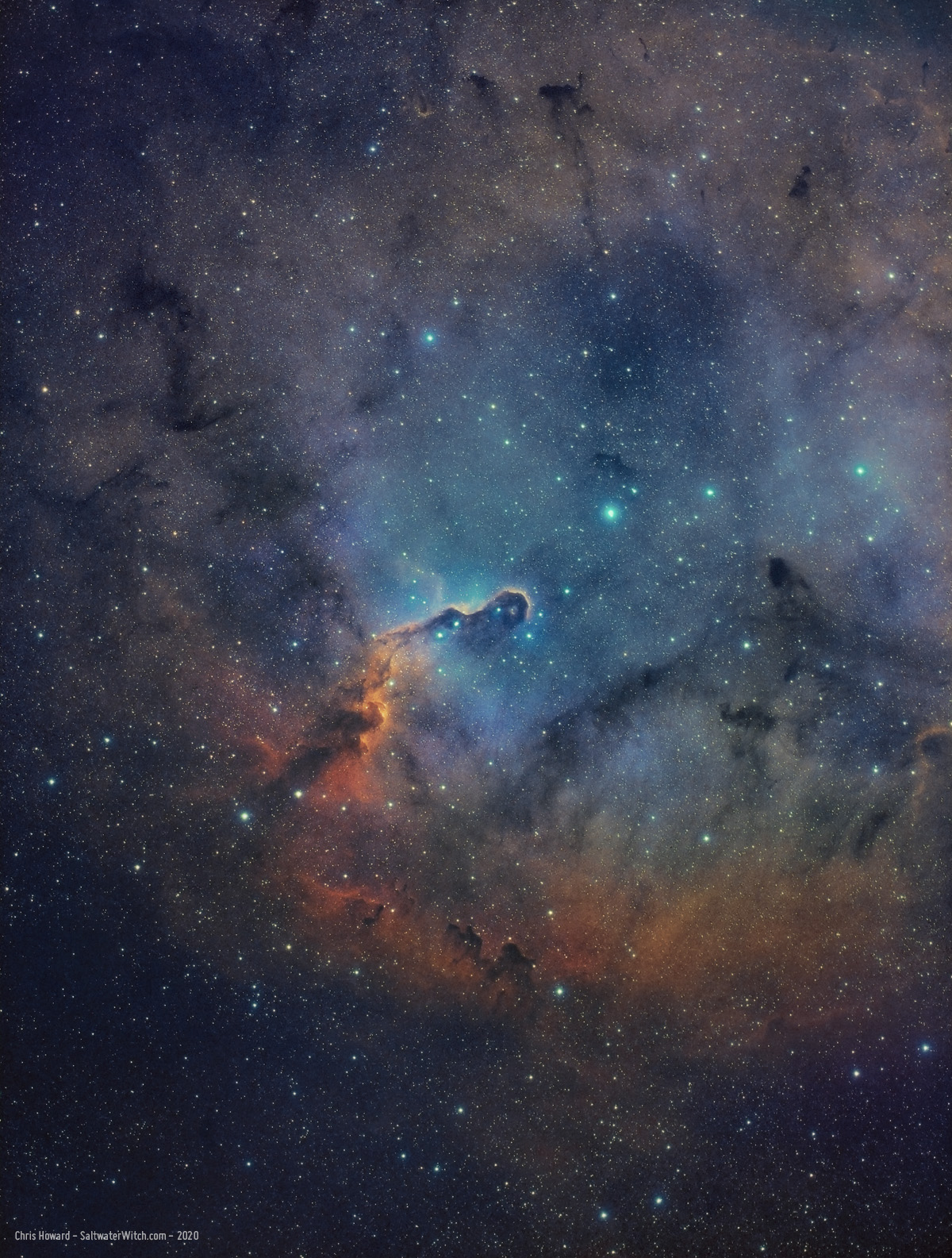 Pacman Nebula (NGC 281) in the Constellation Cassiopeia is an emission nebula about 9200 lightyears away from us, part of an HII region in the Perseus Arm of our galaxy. Notes: Shot from my backyard with the William Optics GT81 Apo refractor, iOptron CEM25P mount, Astronomik narrowband filters. 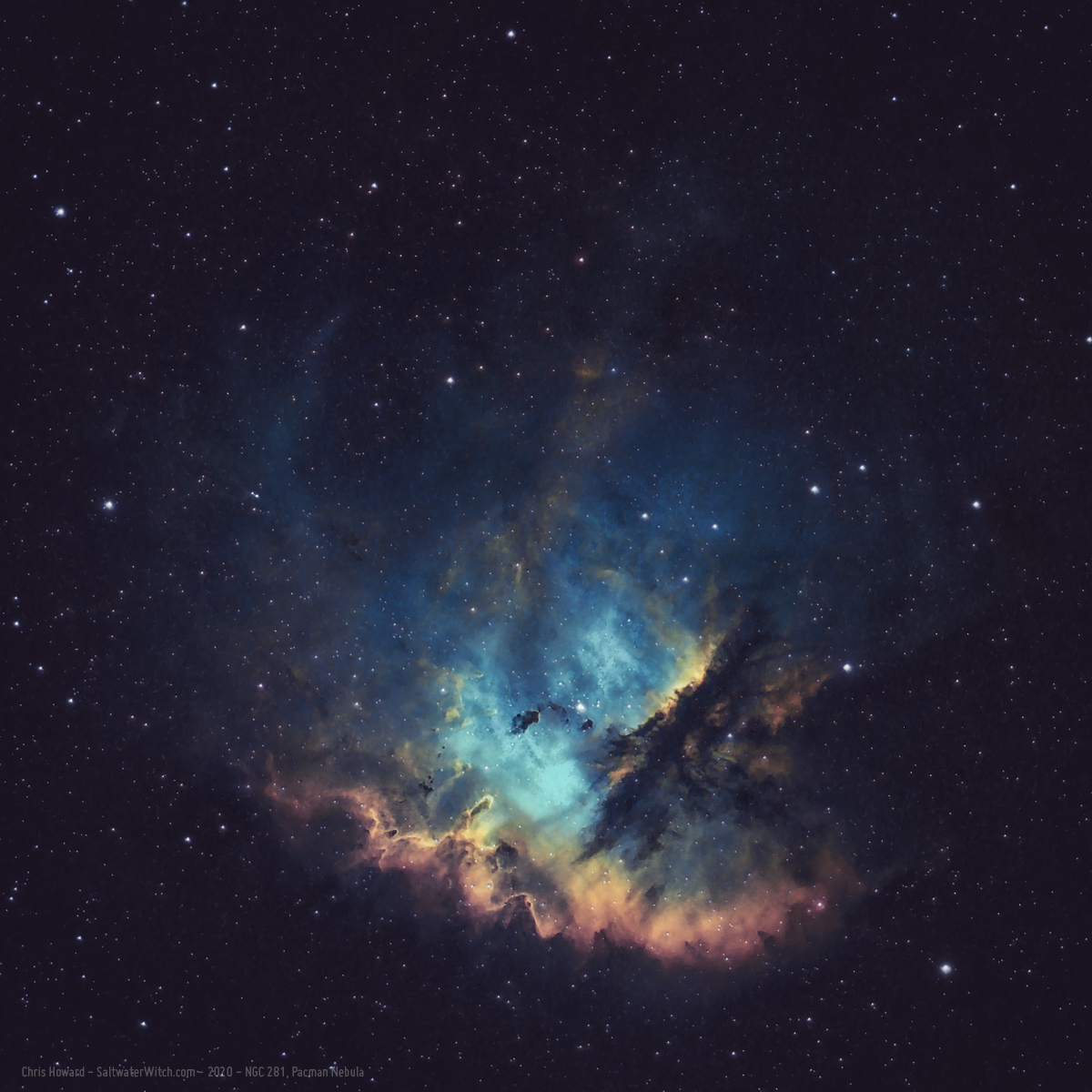 Have you ever been framing in SGP or browsing Telescopius for Messier 16, the Eagle Nebula or M17, the Swan Nebula, and looked over and saw that totally creepy arrow-shaped dark nebula--and thought, I want to take pics of that? Well, that's B312. Let's get started!

Okay, I'm back with the  fully operational* William Optics GT81 and Moonlite focuser setup, with the flat field and focal reducer spacing much closer to spectacular than it was yesterday, and my first astro-imaging target for the night is B312 in the Constellation Scutum. That's Barnard 312 from the classic Barnard Catalogue of Dark Markings in the Sky. Yes, that is the actual full title, although it's usually shortened to "The Barnard Catalogue". I have had my eye on B312 for a while. It's this beautiful arrow shape of interstellar dust twisting through the dense starfield where Scutum edges up against Serpens and Sagittarius, just out from the Milky Way core. B312 is thought to be made up of rapidly condensing clouds of molecular hydrogen (H2) that will in the near future become a star-forming region. Cool. I'm not holding my breath. How near into the future is relative, but you'll be on the right track if you think in terms of galactic time scales. Here in New Hampshire time moves a little slower and B312 is very low in the south, never rising above 32 degrees or so. I can only capture it east of the meridian, so I don't have a lot of time before the earth rotates it behind trees and transmission lines. And guiding that far south, just above the horizon, is always trouble, doesn't matter which mount I use. Right now in PHD2, I'm happy with a 1.25 arcsecond total RMS. I will just have to enjoy the far south nebula time while I can, and deal with it in post, as they say. Notes: 36 x 240-second Ha sub-exposures stacked in DeepSkyStacker, processed in PSCC2020.

* the scope was fine, but I had dismantled everything and returned it to it's default position--original focuser, with the 90mm tube rings and vixen dovetail bar. By "fully operational" I mean I went back to the config with the Moonlite focuser. 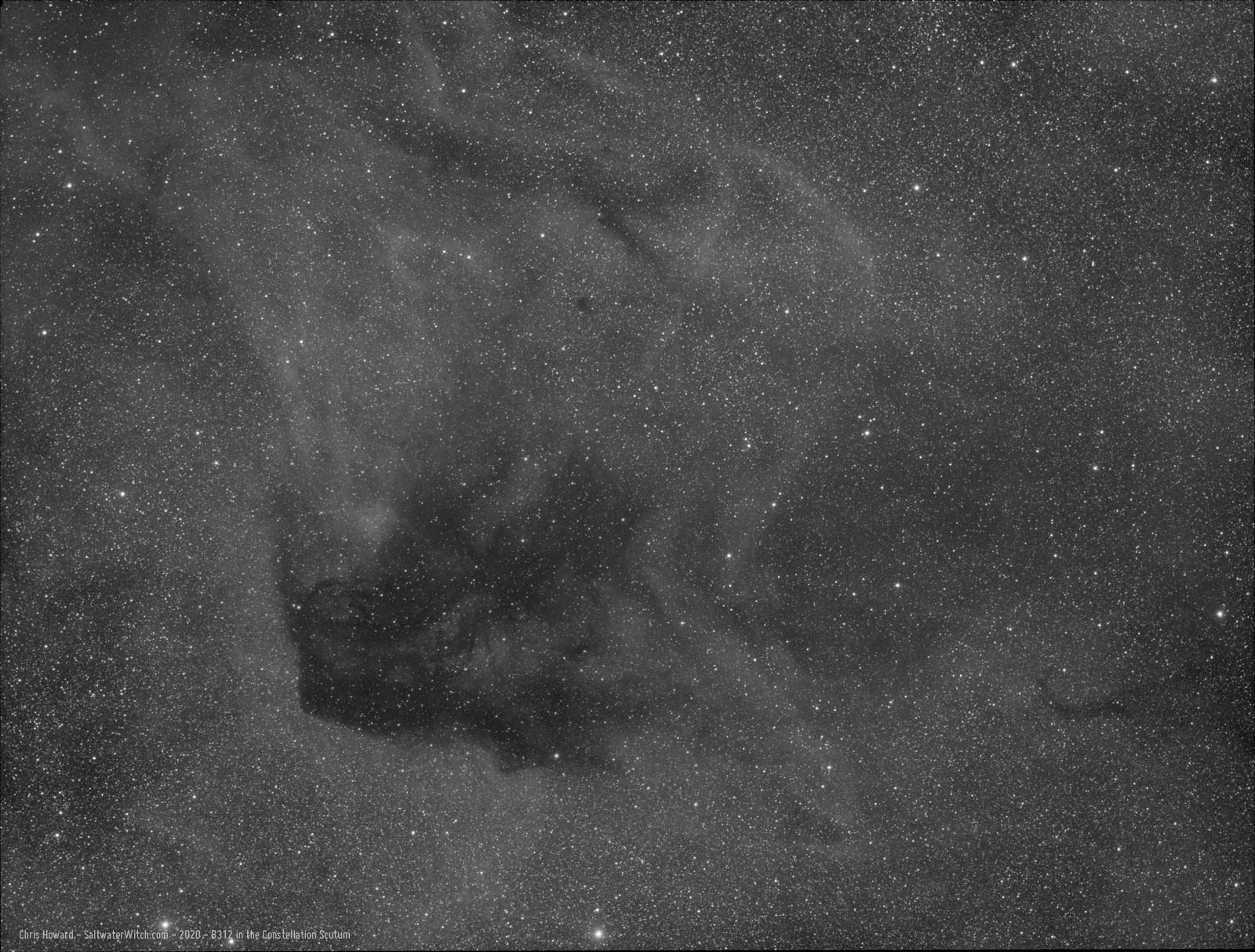 Much better guiding and clearer skies heading toward the zenith with the North America Nebula. Here's a processed stack of 41 x 4-minute hydrogen-alpha subs of the "Cygnus Wall" in NGC7000. A lot of signal, not a lot of noise, and those gradients of ionized interstellar hydrogen are "like buttah" they're so smooth. Still not happy with the stars, but have to wait for the next clear night to correct--could be the OAG. Check out the full image: https://SaltwaterWitch.com/img/NGC7000_Ha_ChrisHoward_20200619_04.jpg That's the full downscaled JPG at 1600 x 1213, not the full sized version of this image, which has a resolution of 14000 x 10618 px. Imaging notes: William Optics GT81 Apochromatic refractor--an amazing piece of hardware, Astronomik 6-nanometer hydrogen-alpha filter, ZWO ASI1600MM-Pro monochrome camera, QHY 5iii178 guide camera, Sky-Watcher EQ6-R Pro Mount. 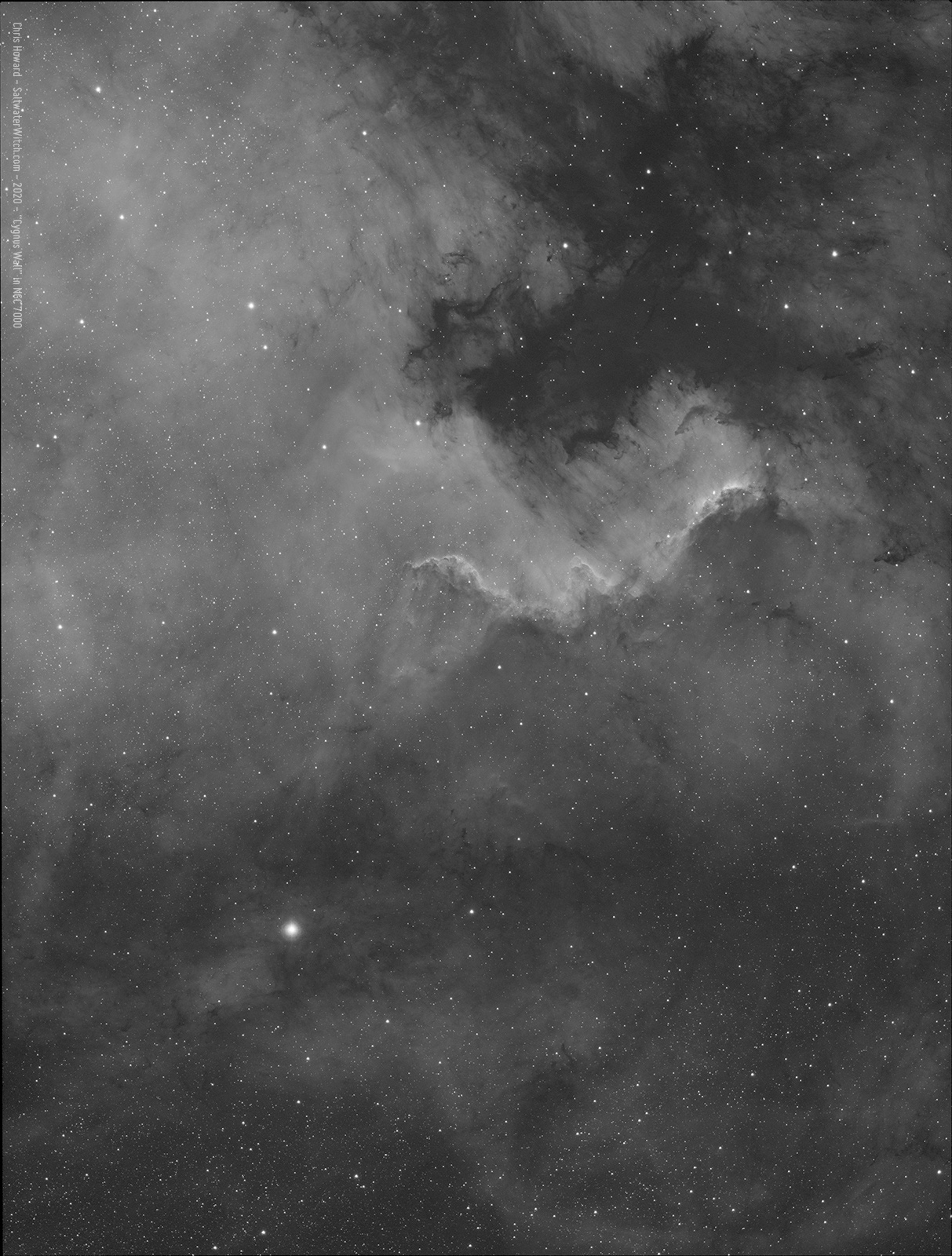 These two images of B312 and NGC7000 are uncropped, and you can see the darker edges where I dithered every three frames. I almost always use drizzle when processing--"drizzle" doubles or triples the resolution of an image using variable-pixel linear reconstruction that preserves photometry and detail, and especially works well if you're undersampling. I'm a bit under with 2.05 arcseconds/pixel with the ASI1600 camera and William Optics GT81, but I still use drizzle in DeepSkyStacker. The drizzle algorithm was originally developed for the Hubble Deep Field observation data, but it's now pretty common in astro-imaging applications.

A couple shots from the NGC7000 sequence. I'm really happy with the tracking and guiding on the Sky-Watcher. These are pretty decent numbers for the mount's location--on the shifting timbers of our back deck. 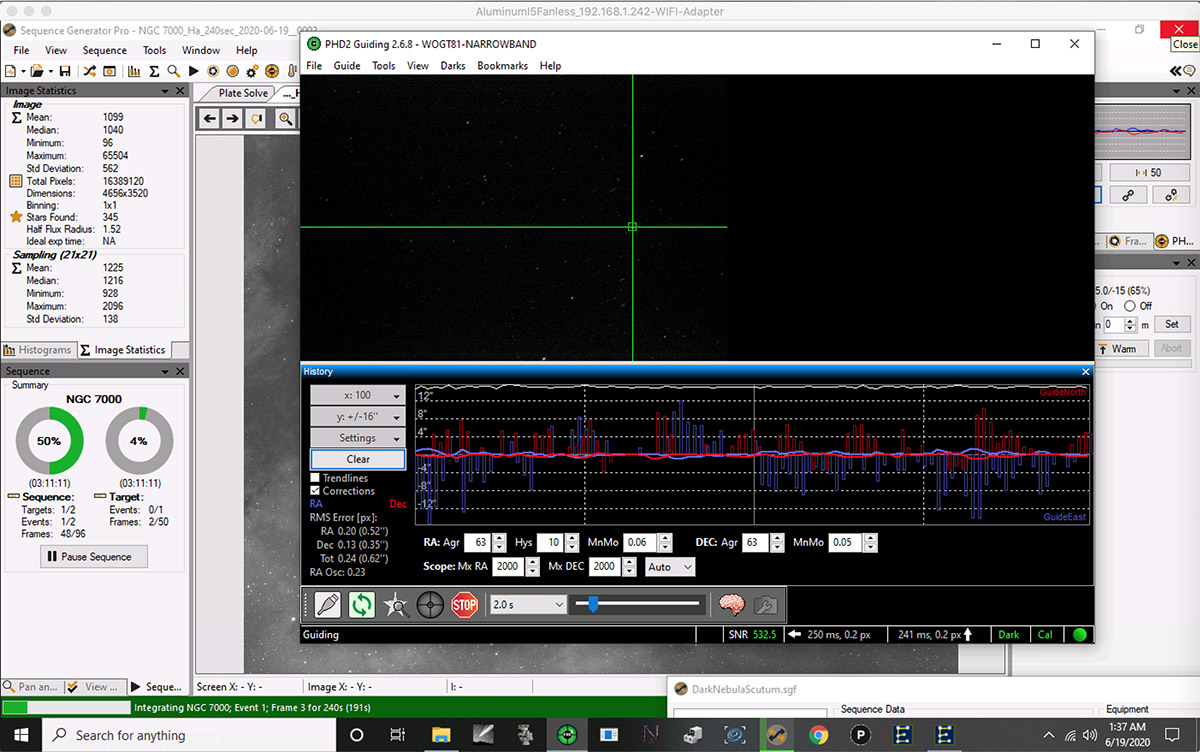 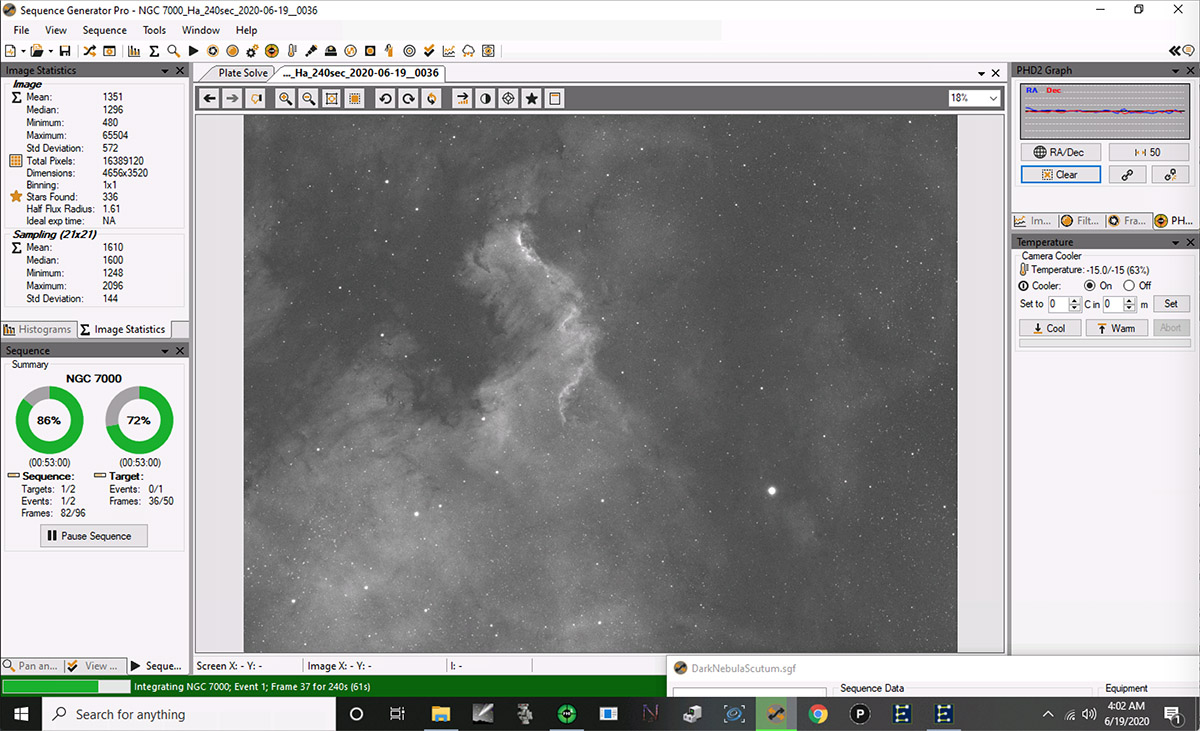 And the video that goes along with this post--check out my Youtube channel for more videos: