Narrowband with the Newt

We finally had some clear-ish skies last night after several days of gloom and rain, and I got to test out the 800mm f/4 newtonian scope with the ZWO ASI1600MM-Pro monochrome camera and 3nm narrowband filters. I spent most of the night imaging NGC 6888, the Crescent Nebula in Ha and OIII, and around 2am moved to the other side of the sky (away from a ~30% waning moon) to capture the Horsehead Nebula (B33) and the Flame Nebula (NGC 2024, Sh2-277), along with the leftmost star in Orion's Belt, Alnitak (bright star with the diffraction spikes from the Newtonian's secondary mirror) Alnitak is actually a triple star system, with most of the light and energy coming from ζ Orionis (zeta Ori), a massive blue super-giant 20 times larger than our star and over 21,000 times brighter. Imaging notes: 20 x 300-second subs in Ha, stacked in DSS. Apertura 800mm f/4 Newtonian OTA, ZWO ASI1600MM-Pro mono camera, Antlia 3nm Ha filter, ZWO ASI290M OAG, on the Sky-Watcher EQ6R-Pro mount with the ZWO ASIAir Plus controller. 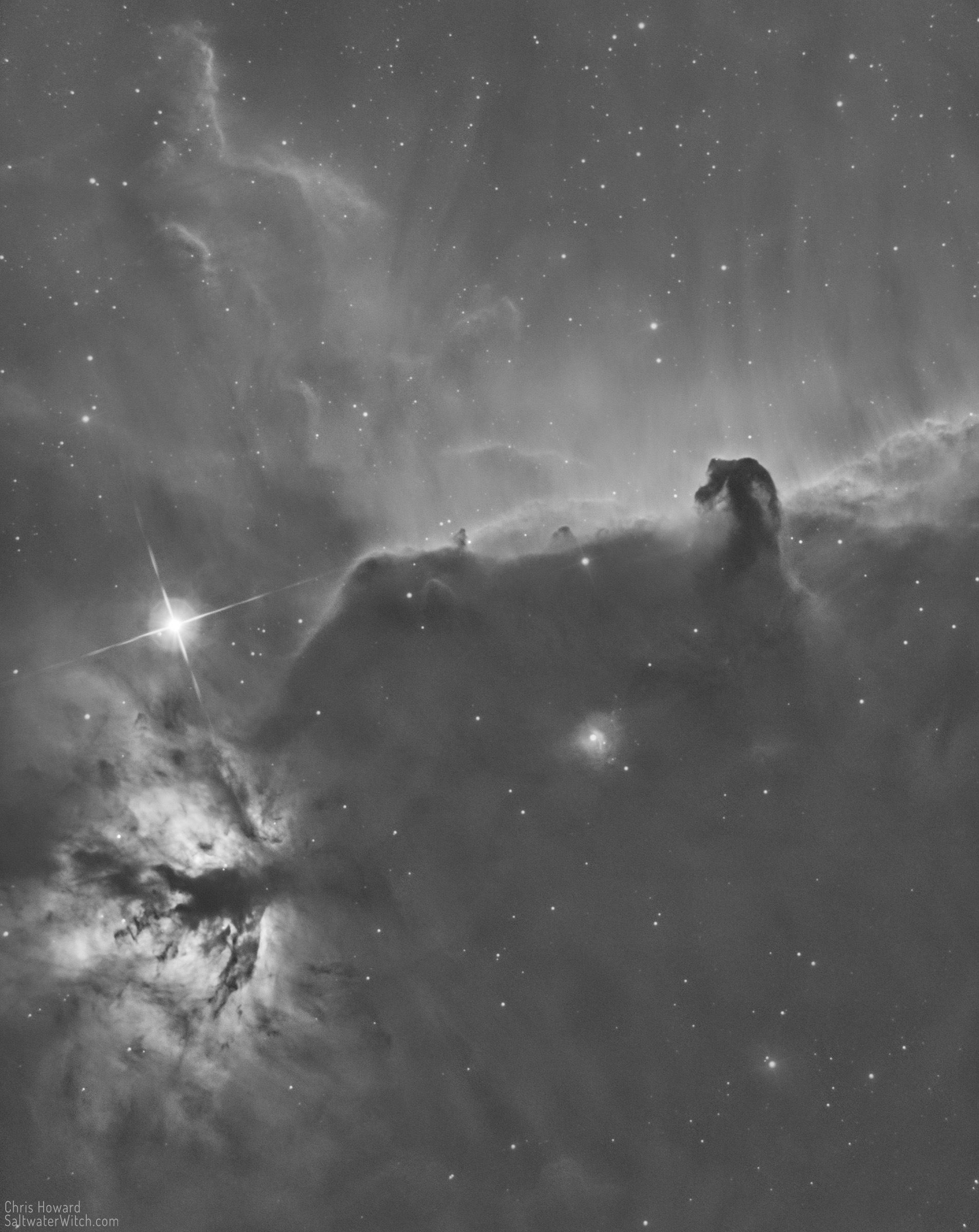 NGC 6888, the Crescent Nebula in Ha+OIII. The Crescent is an emission nebula 25 lightyears across, about 5000 lightyears away in the constellation Cygnus. This interesting set of structures with multiple shock waves, including an inner shell of hydrogen surrounded by an expanding envelope of oxygen (the semi-transparent bubbling blue structure) is the result of a collision of the fast-burning Wolf-Rayet star WR136 with a massive red-giant star. I usually shoot the Crescent in hydrogen-alpha only, and that will only pick up that inner crusty blob, but it's way creepier with the oxygen bandpass data and that weird semi-transparent blue sleeve, perfect for October. Imaging notes: 80 x 300-second subs in Ha and OIII, stacked in DSS. Apertura 800mm f/4 Newtonian OTA, ZWO ASI1600MM-Pro mono camera, Antlia 3nm Ha, OIII filters, ZWO ASI290M OAG, on the Sky-Watcher EQ6R-Pro mount with the ZWO ASIAir Plus controller. 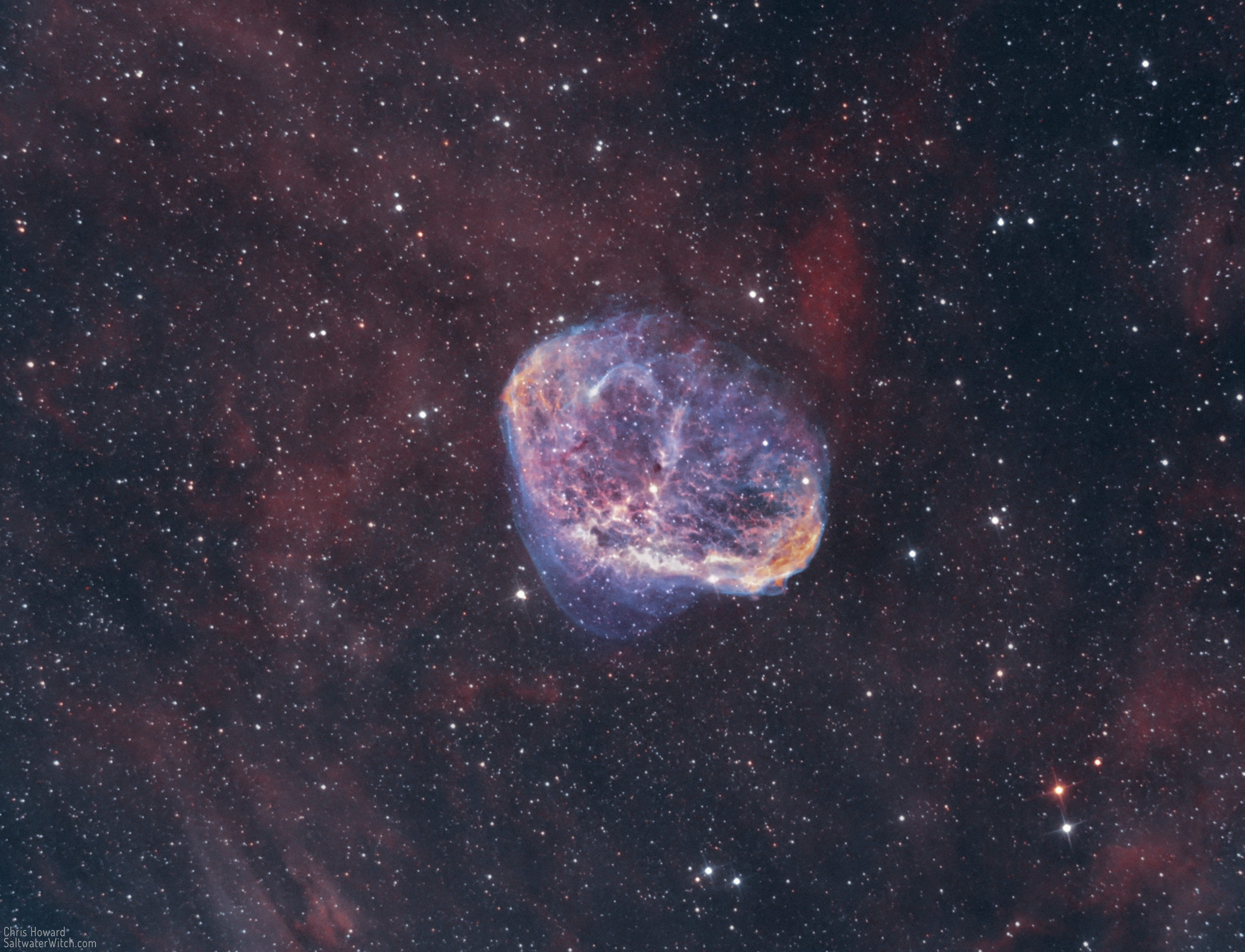 ASIAir Plus with the Sky-Watcher

Trying something new tonight. So far, I've only used the ZWO ASIAir Plus with the AM5 mount and my William Optics scopes. So, I'm setting up the Sky-Watcher EQ6R-Pro and the 800mm Newtonian for narrowband, and decided to try out the ASIAir with this combination of gear. It has every feature I use with NINA (my normal astro controller system), that's polar alignment, plate solving, sequenced capture, guiding, so should work well! 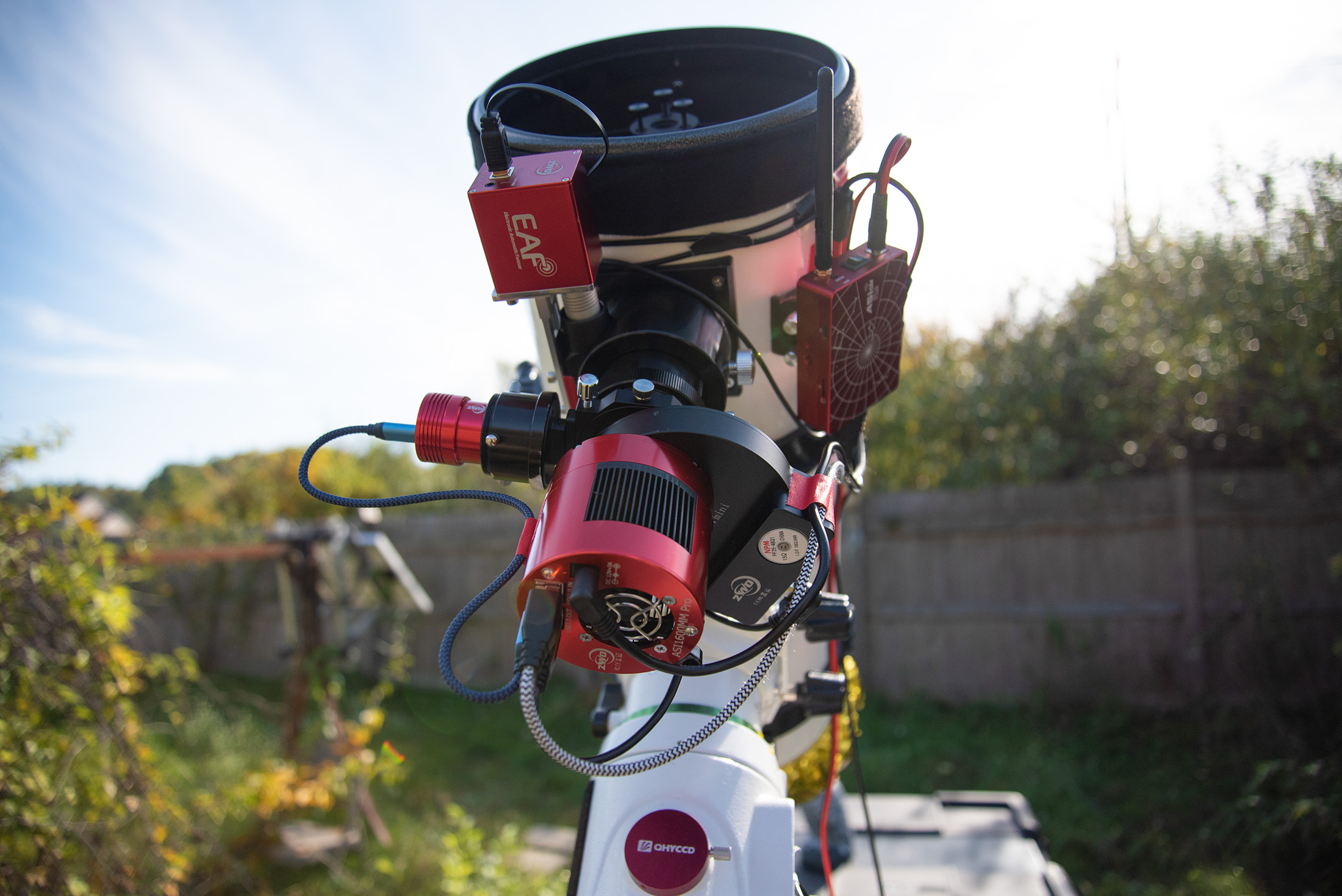 It's that time of year—my favorite, in fact. The autumnal equinox was on the 22nd, and that means Orion is back in the night sky, well actually in the very early morning sky. Last night the whole constellation was above the trees, around 25° rising in the East at 2 AM, and I captured 30 subs each for Red, Green, Blue, Luminance. Here they are stacked and processed. 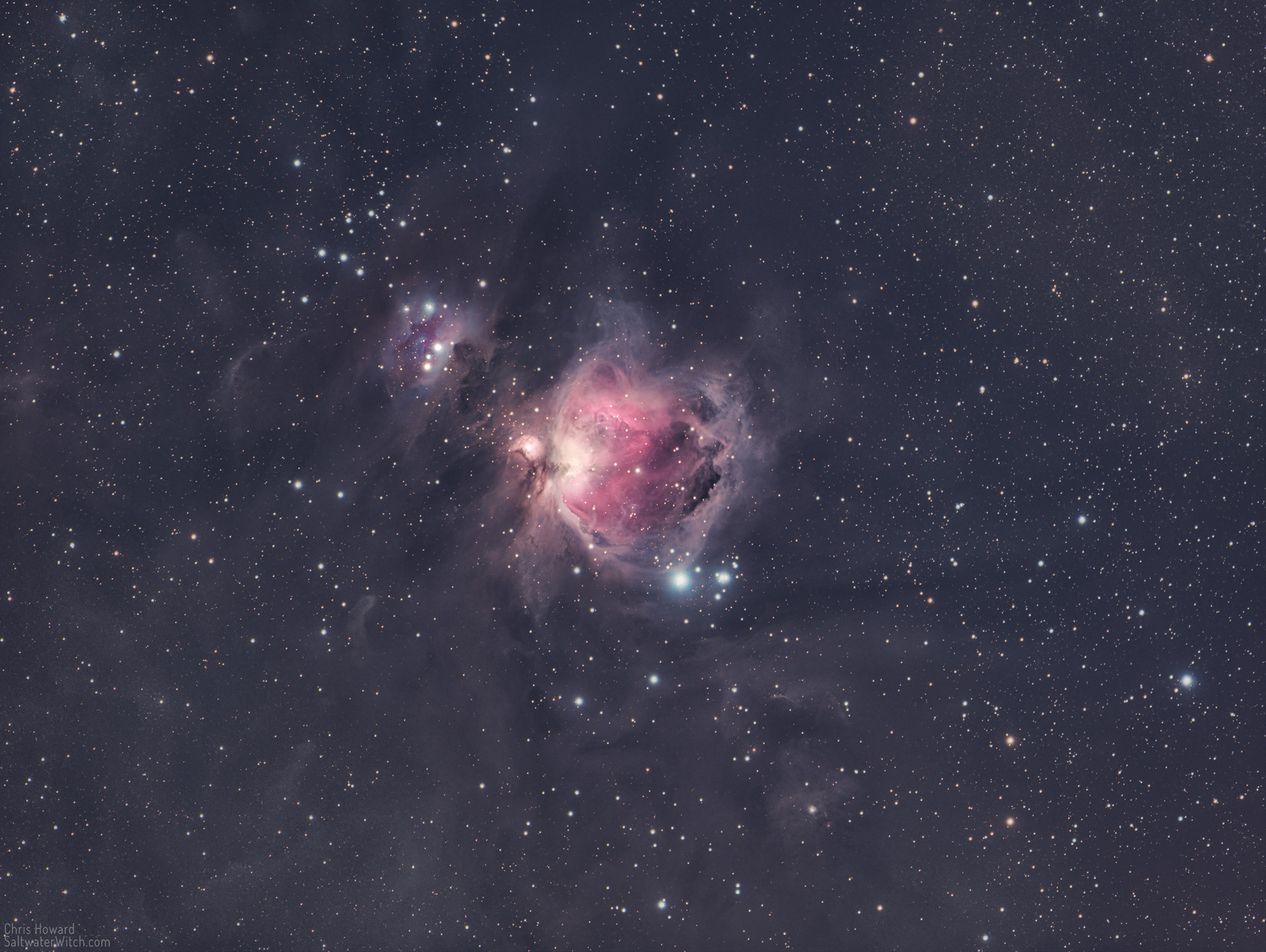 The Ghost of Cassiopeia

Gamma Cassiopeiae (γ Cassiopeiae) or just "Gamma Cas" and sometimes "Navi" is the center star in the "W" asterism that makes up the constellation Cassiopeia, one of the easiest constellations to find in northern hemisphere skies. It's an eruptive variable star—which sounds exciting for a star; this basically means it is unpredictably variable, with an apparent magnitude between 1.6 and 3, and does not follow an observed repeatable cycle. The two nebulae IC63 ("Ghost Nebula", below γ Cass in this rotation) and IC59 (above) are fairly dim, but do reflect light from γ Cass and other nearby stars, and IC63 exhibits some emission properties, gaining energy and then emitting it as light. Gamma Cas and both nebulae are about 550 lightyears away, very close to us. In terms of distance from Earth, this is one of the closest Deep Sky Objects I have ever captured, and M45, the Pleiades, at around 450 lightyears may actually be the closest. Imaging Notes: 93 x 180-second subs across Red, Green, Blue filters (Astronomik Deep Sky RGB), ZWO ASI1600MM-Pro monochrome camera running at -10C, ZWO AM5 EQ mount, William Optics SpaceCat 51 apochromatic refractor, ZWO ASI290MM guide camera with OAG. 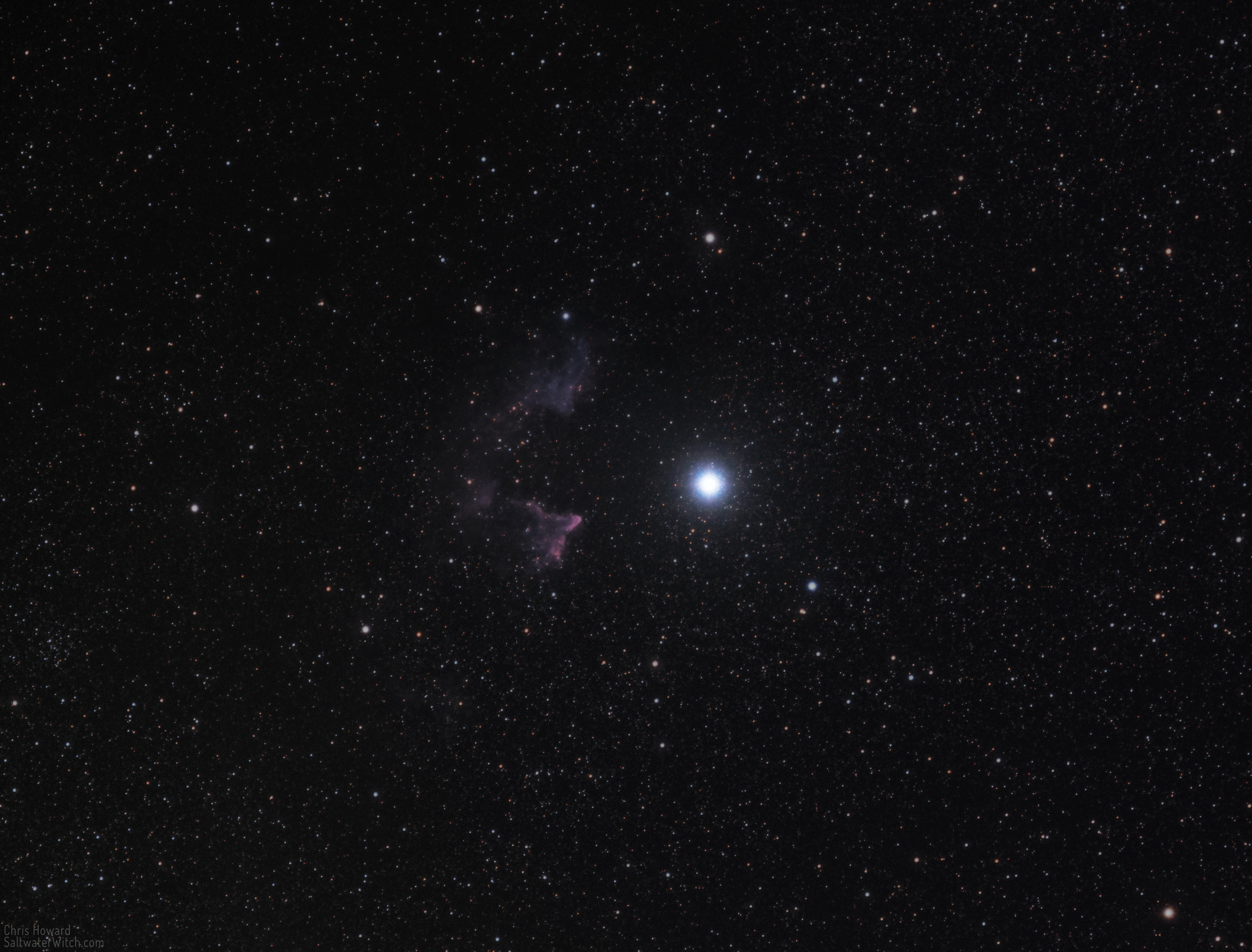 The Cocoon Nebula (IC 5146, Caldwell 19, Sh2-125) is a combination reflection and emission nebula in Cygnus, and the long trail of dust is the dark nebula Barnard 168. (In an emission nebula, the intense radiation from one or more stars causes the surrounding gases—hydrogen, oxygen and other gases, to release energy and emit their own light, e.g., the hydrogen itself is lit up. In a reflection nebula, the light from one or more stars reflects off or shines through the surrounding interstellar dust, hydrogen, and other gases. So, there's a bit of both going on in the Cocoon). The last time I captured the Cocoon Nebula, a little over a year ago, I used the 800mm Newt and IC 5146 (the circular red region) filled most the whole center part of the image. This time, with the SpaceCat's wider field of view, 250mm focal length, I framed the area to be able to capture the long stream of interstellar dust catalogued as B 168. The Cocoon, IC 5146 is about 4000 lightyears away, and the central star illuminating the surrounding gas and dust is a newly-formed star, maybe only 100,000 years old (compare to our star: the Sun is around 4.6 billion years old). Imaging Notes: 90 x 180-second Red, Green, Blue filters (Astronomik Deep Sky RGB), ZWO ASI1600MM-Pro monochrome camera running at -10C, ZWO AM5 EQ mount, William Optics SpaceCat 51 apochromatic refractor, ZWO ASI290MM guide camera with OAG. 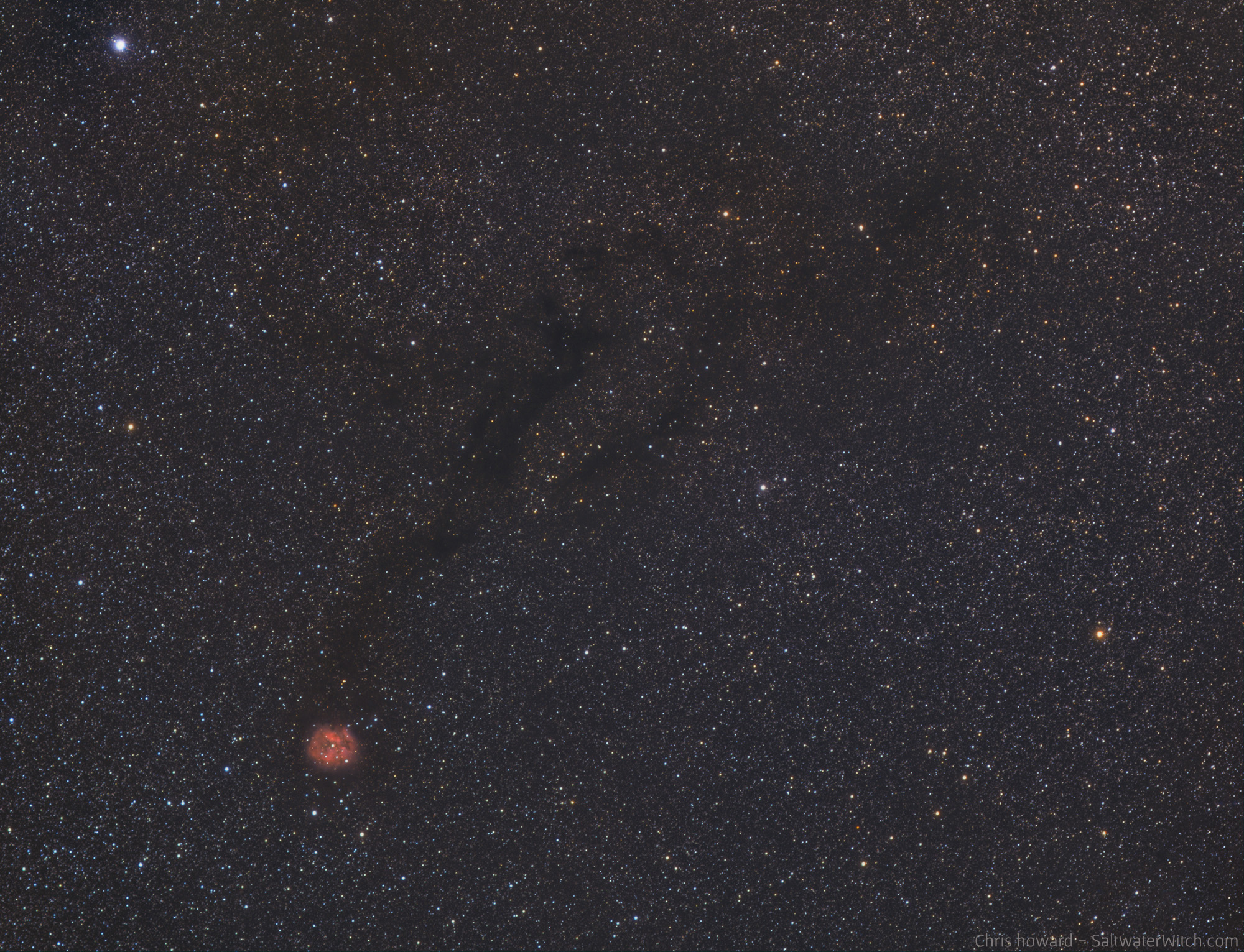 Beautiful skies last night, mostly clear, and no moon, the perfect night for broadband color with separate RGB filters, and I went after one of the finest northern hemisphere color targets. Andromeda (M31) is one of our galactic neighbors at only 2.5 million lightyears away. Our own galaxy, the Milky Way, may have as many as 400 billion suns, while Andromeda may have as many as a trillion suns. M31 is about 152,000 light-years across, and the Milky way is a bit under 90,000 lightyears. We're both good-sized barred spiral galaxies. Stick around for a few billion years and you can watch us collide and form one massive galaxy. Notes: 51 x 120-sec Red, 53 x 120-sec Green, and 56 x 120-second Blue filter (Astronomik Deep Sky RGB filters), 60 x 180-second Hydrogen-alpha (Astronomik 6nm), ZWO ASI1600MM-Pro monochrome camera running at -10C, ZWO AM5 EQ mount, William Optics SpaceCat 51 apochromatic refractor. 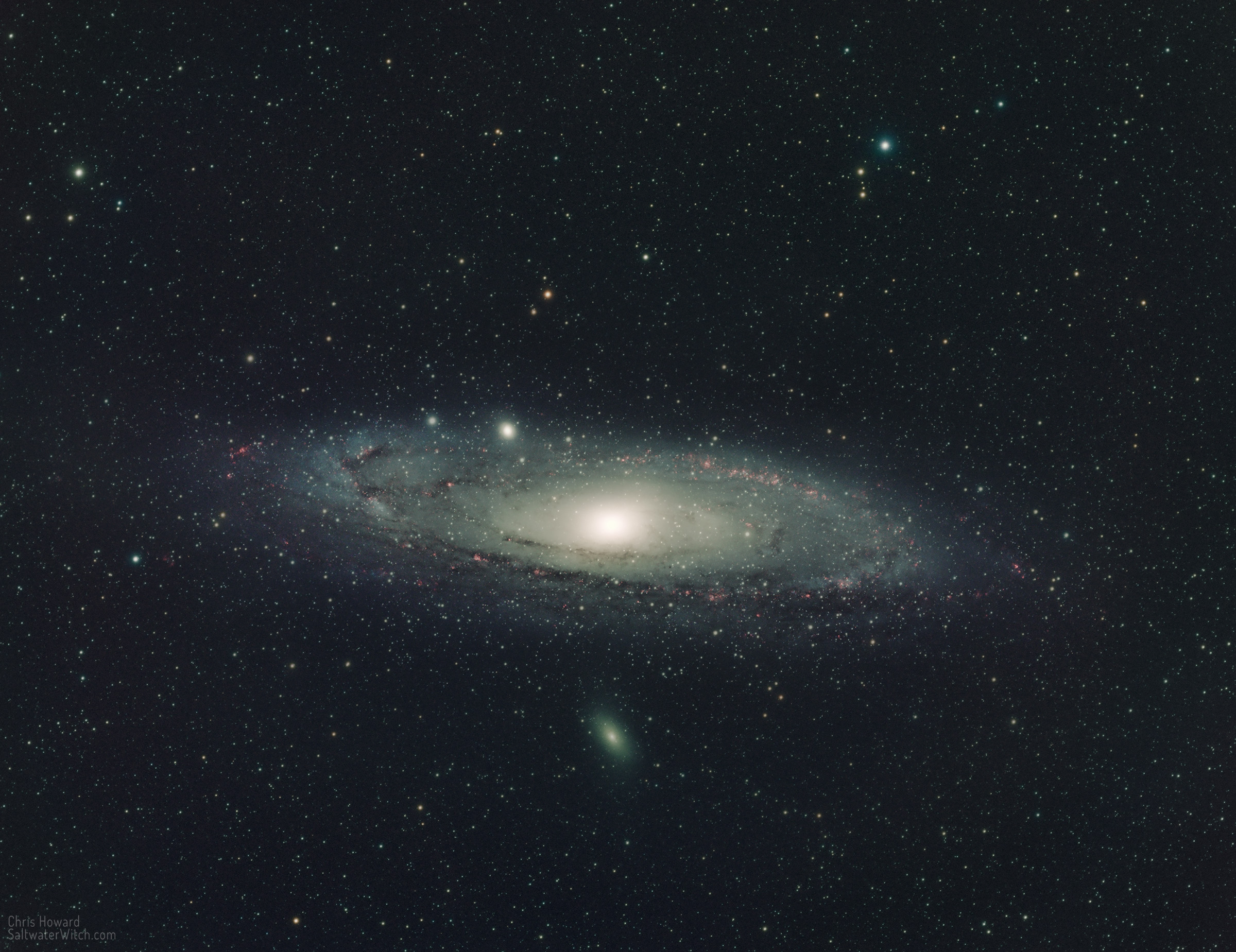 The Milky Way and Andromeda are two of the largest members of the Local Group, which contains about 80 galaxies, most of which are dwarf galaxies with something like 10 billion stars or fewer. M110 (below) and M32 (above) are satellite galaxies of Andromeda, and both are dwarf galaxies in the Local Group. Most of these dwarf galaxies don't have much of an internal structure, no dust lanes, very little star formation. (M110 is an exception, in that there are remnants of a spiral of interstellar dust and there's ongoing research looking at M110's origins and development). Andromeda may contain a trillion solar masses and the Milky Way galaxy contains around 400 billion solar masses—give or take a few billion. From our perspective along the Orion-Cygnus Arm (sometimes called the "Local Arm") of the Milky Way, the Andromeda Galaxy is at an angle, tipping toward us, inclined around 77° relative to Earth. I believe the edge of M31 with M110 (bottom in this rotation) is the side closest to us. One of the notable catalogued regions within the galaxy is NGC 206 (bright bar on the lower left side), a star forming region with hundreds of relatively new spectral class O and B stars. These hot blue-giant stars are so bright and massive we can resolve them from our galaxy with consumer telescopes. 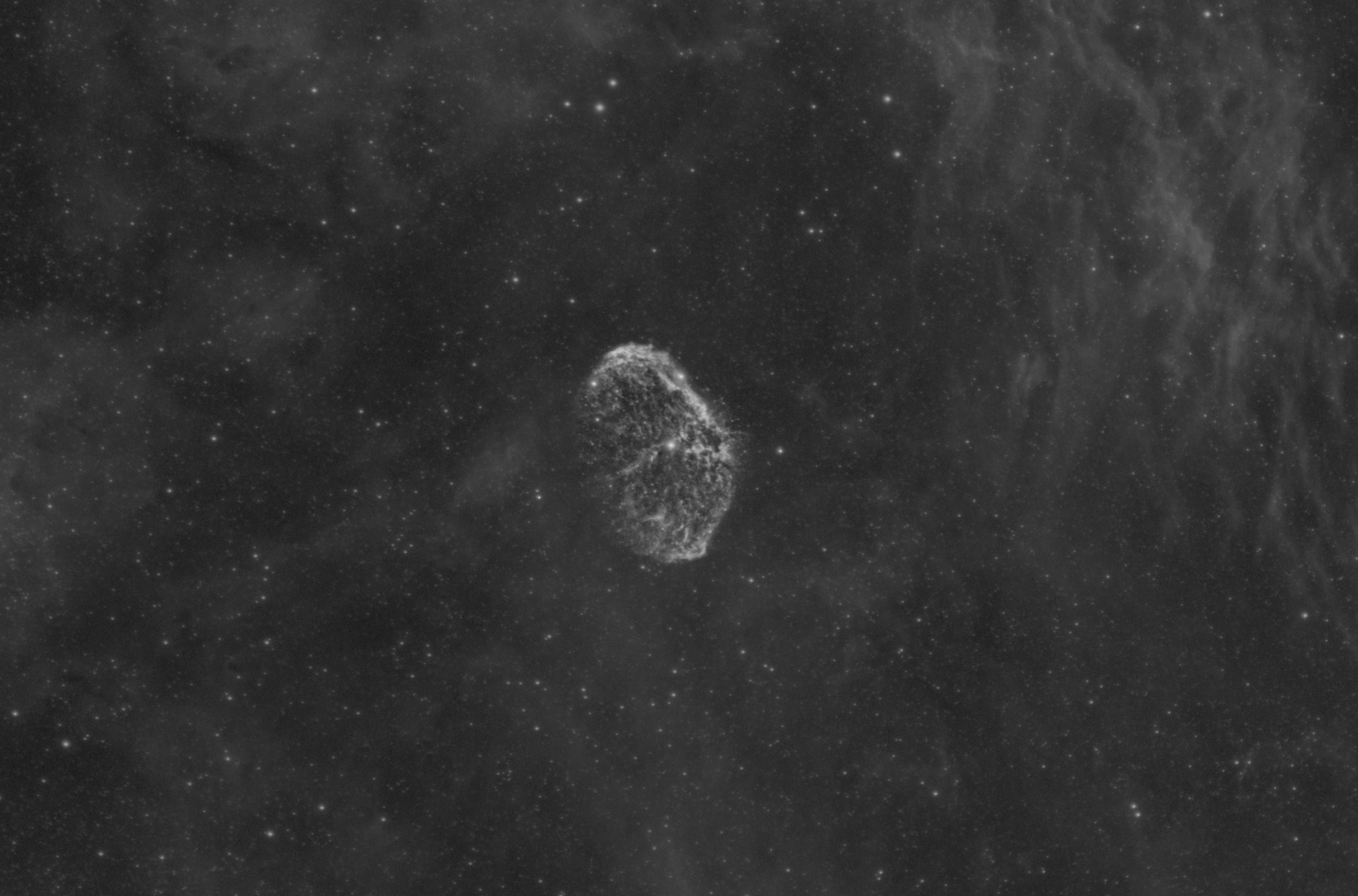 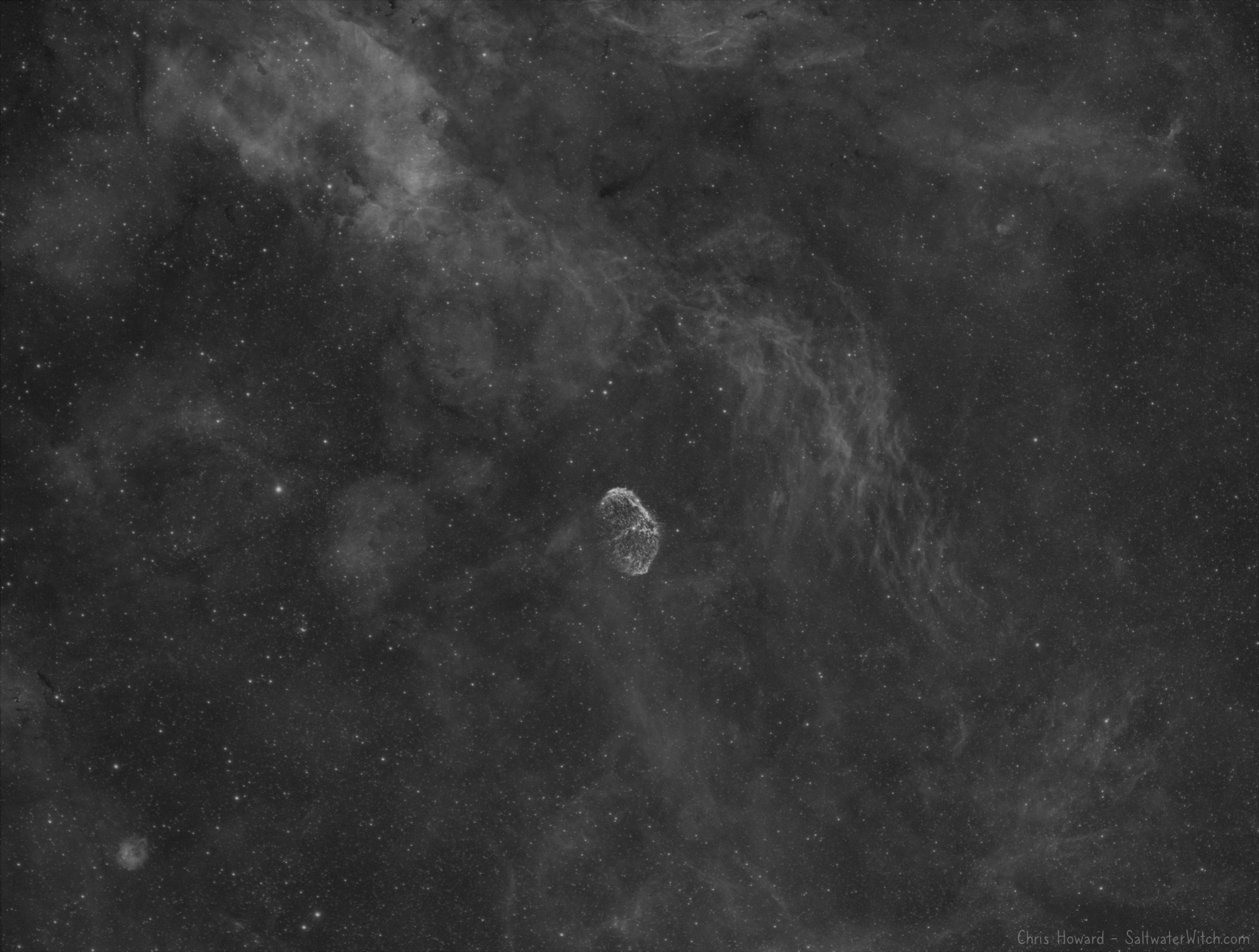 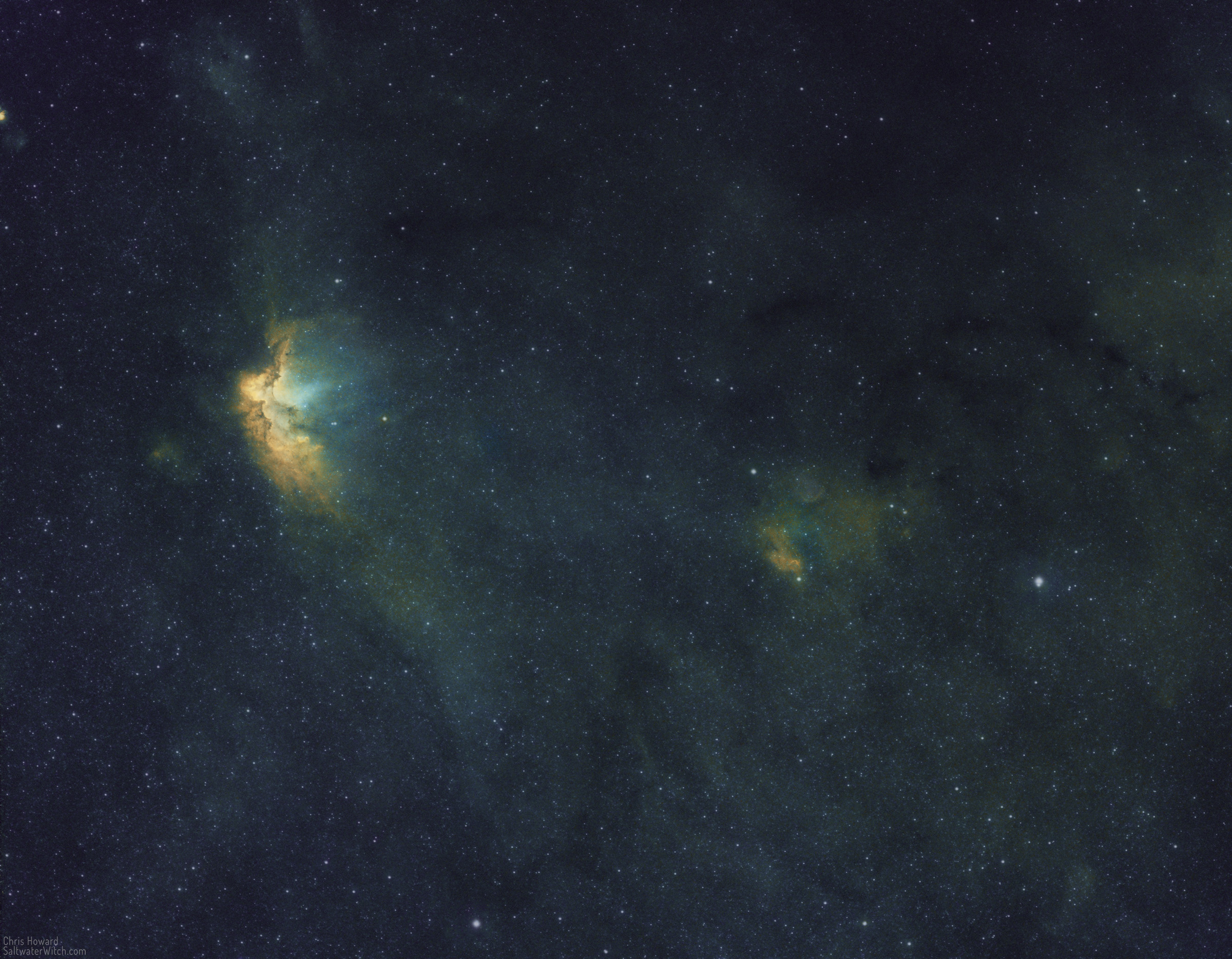 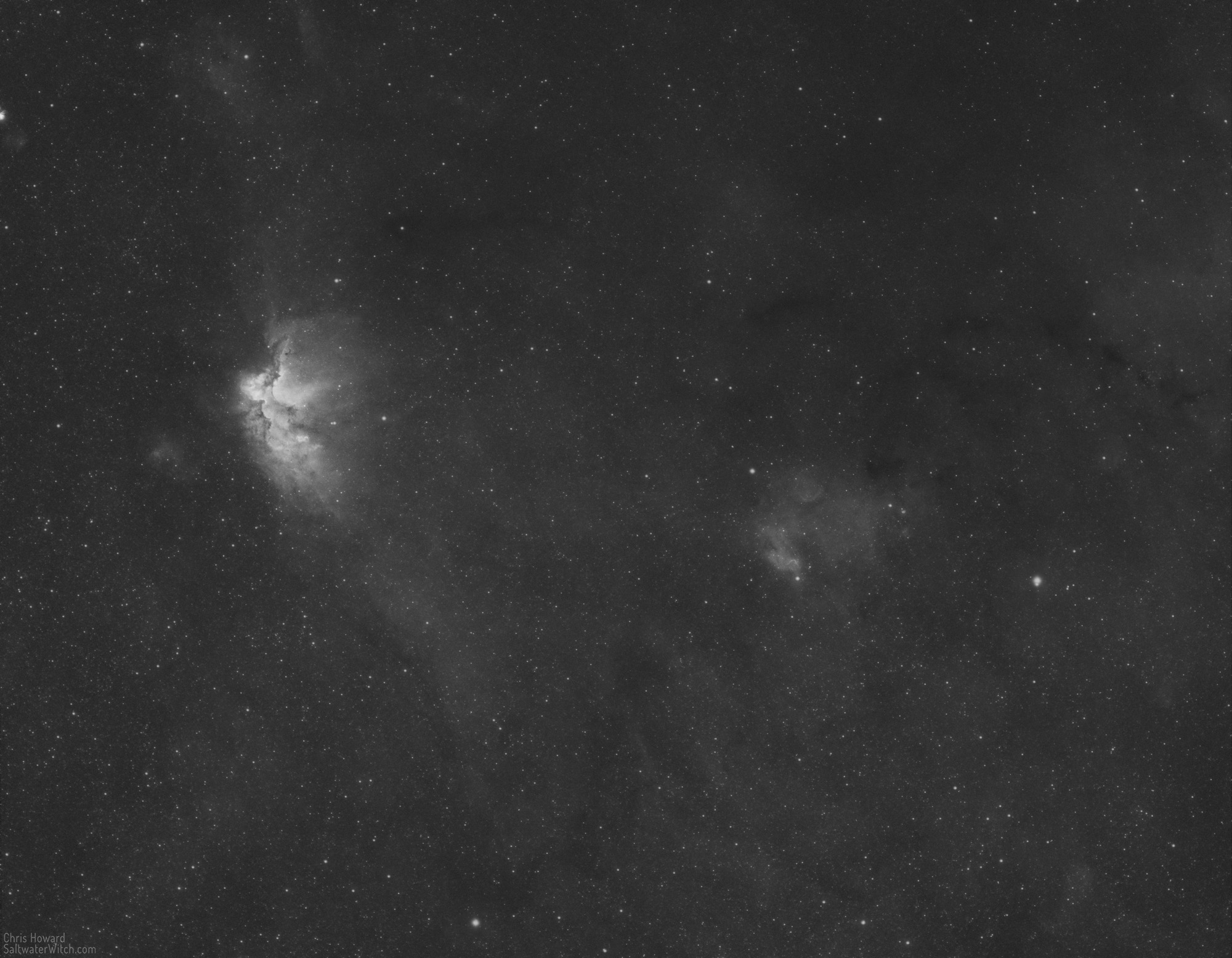