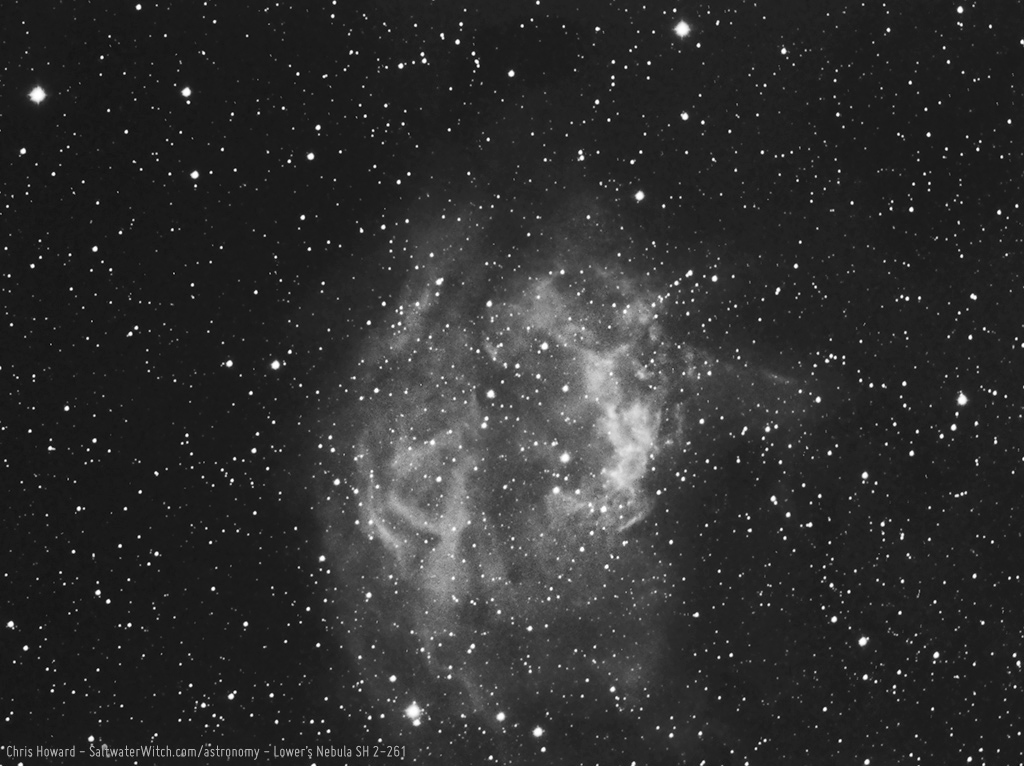 A couple test Ha frames of Lower's Nebula (SH 2-261) in the constellation Orion. I only took two exposures of Lower's Nebula while waiting for the Rosette Nebula to rise, and it reminded me of a scene in the movie Roxanne with Steve Martin (CD Bales) and Daryl Hannah (Roxanne):

C.D. Bales: Now, see, I like it when they give astronomical objects names, you know, like "Andromeda" and "Saturn" and "Sea of Tranquility." This whole numbering thing is just too boring for us civilians.

Roxanne: Do you know how many objects are up there?

That's the problem when you're a constellation like Orion, with a nebula so massive and bright you can see it clearly without a telescope (M42), or you possess dark nebular structures famously shaped like animals (Horsehead nebula, Barnard 33). You get overlooked if you're not a superstar or supernova remnant or "The Great" Orion Nebula. Yeah, that's Lower's Nebula (SH 2-261), which I'm sorry to say, I had never heard of before last night. Unfortunately that's probably because Lower's Nebula isn't the buckle on Orion's Belt. It isn't even hanging off of Orion's famous belt. It is literally out on a distant arm of the constellation--yes, Orion has one arm raised, far away from the Belt, and the famous stars like Betelgeuse, Bellatrix, and Rigel, and that's where you'll find this obscure cloud of hydrogen that doesn't even have a wikipedia page (In English. I found an Italian page for SH2-261. Nicely done, Italy.)