Last night I was out with the William Optics SpaceCat, CEM25P mount, and the ZWO ASI071MC color camera to run some analysis on guiding, which hasn't been excellent lately--trying to determine the cause, but also to try out some new astronomy control software: N.I.N.A., which stands for Nighttime Imaging 'N' Astronomy. It's free, open source software that has interested me for several months. Find it here: https://nighttime-imaging.eu/ I first downloaded it last October and did some daytime testing, connecting cameras and a mount, but I haven't been back to it until yesterday. I like and regularly use both Sequence Generator Pro with ASCOM on Windows, and Ekos/KStars with INDI on linux. Both work equally well, with advantages and disadvantages, with features I like and don't. The framing and mosaic wizard in SGP is unbeatable. I like the guiding process built into Ekos way more than PHD2, along with the extreme portability and performance you get with INDI/KStars/Ekos on a Raspberry Pi 4 SMB. They are fantastic apps, worth checking out to see what works for you and your setup. Some may point out that SGP has a price tag, but at only $99 US, I would still put it in the same "basically free" category as Ekos.

NINA certainly has my attention after last night's imaging run (I installed version 1.10 BETA007, which ran beautifully). I have been using SGP and Ekos for years, and for the most part they are solid working applications that have delivered quality imaging, automation, and equipment control. Of course--like everyone, I have also experienced dozens of wasted clear nights because software didn't function correctly, drivers failed, intermittent hardware issues, voltage and current issues. Maybe that's just part of engaging in a technical hobby like astronomy and astrophotography. You learn to troubleshoot weird problems in the dark, half-asleep and staggering out to your gear in the early morning hours. But it's when you see a nebula or galaxy appear in the SGP or Ekos or NINA image window after a five-minute exposure, that makes it fun, and maybe solving those problems seems worth it. Usually.

NINA, like SGP, is a Windows app and sits on top of ASCOM protocols and hardware specific integrations, so if SGP works with your cameras, mount, focusers, filter wheels, etc., chances are NINA will also work.

And NINA really shines with its modern design, intuitive system workflow, and noticeably quick processing speeds when imaging, focusing, and plate solving. There's some brilliant application design built into NINA at the foundation, in the way it allows a new user to experiment, to just try something, click the autofocus button without the sense that you won't be able to find your way back if it goes sideways. Many Windows apps are designed with a very structured user path that guides you toward completing a milestone or reaching a given endpoint with no way to stop and go back before you get there. On the other hand, NINA seems to have been designed with almost continuous access to all the equipment tabs, configuration options, immediate saves for configuration changes, even when other processes are running. 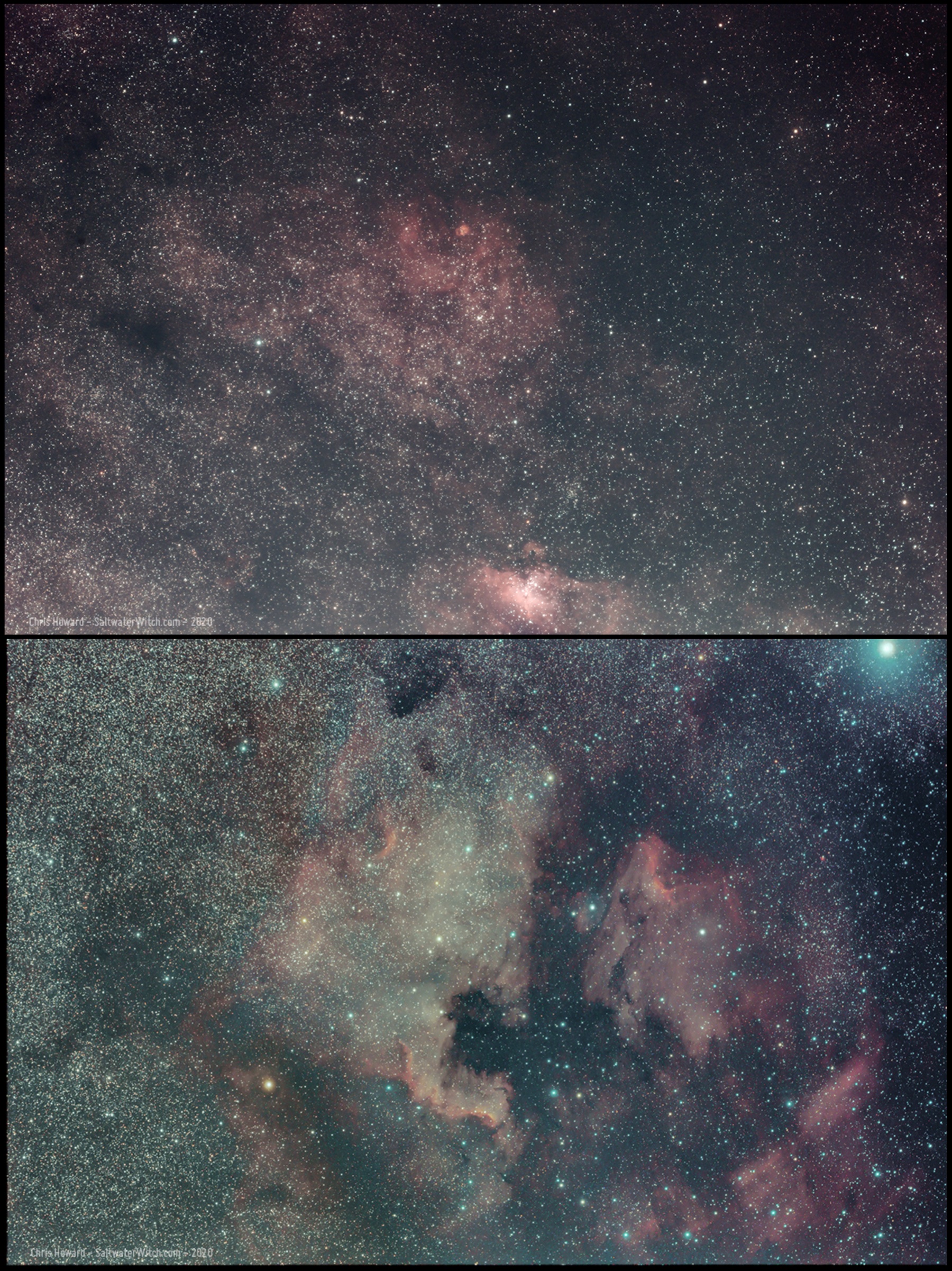 NINA is also a complex app that provides a complete astro imaging, planning, and automation workflow, and I found myself jumping around to different tabs and panels, looking for things throughout the night. I quickly found just about everything I was looking for. At some point last night I was thinking I should be able to make tweaks to a sequence while it's running--like you do with SGP, but that wasn't a serious issue since it only took a moment to stop, edit, and restart the sequence. I struggled a bit with autofocus, but I didn't spend any time configuring or calibrating it--and that would be the same with any astro app.

Here are a couple stacked test shots from last night, reasonably processed in PSCC2020. Top centered is NGC 6604 open star cluster in Serpens, and Sh2-54 (GUM 84) is that bright block of ionized hydrogen just above center. That's Messier 16, Eagle Nebula going out of frame at the bottom. The second image is NGC 7000 North America Nebula, with the Pelican to the right of it across that gulf of dark dust and nebulosity. That's the blue supergiant, Deneb in the upper right corner, the brightest star in Cygnus, and 19th brightest in the night sky from our point of view. 20 x 240 second subs, no calibration for each target.  For M13 I shot 200 x 30 second subs, and no cal frames.

Another couple from last night--first is my setup for the night, and in this shot I'm actually in the middle of a 200-sub exposure sequence of M13, image below. 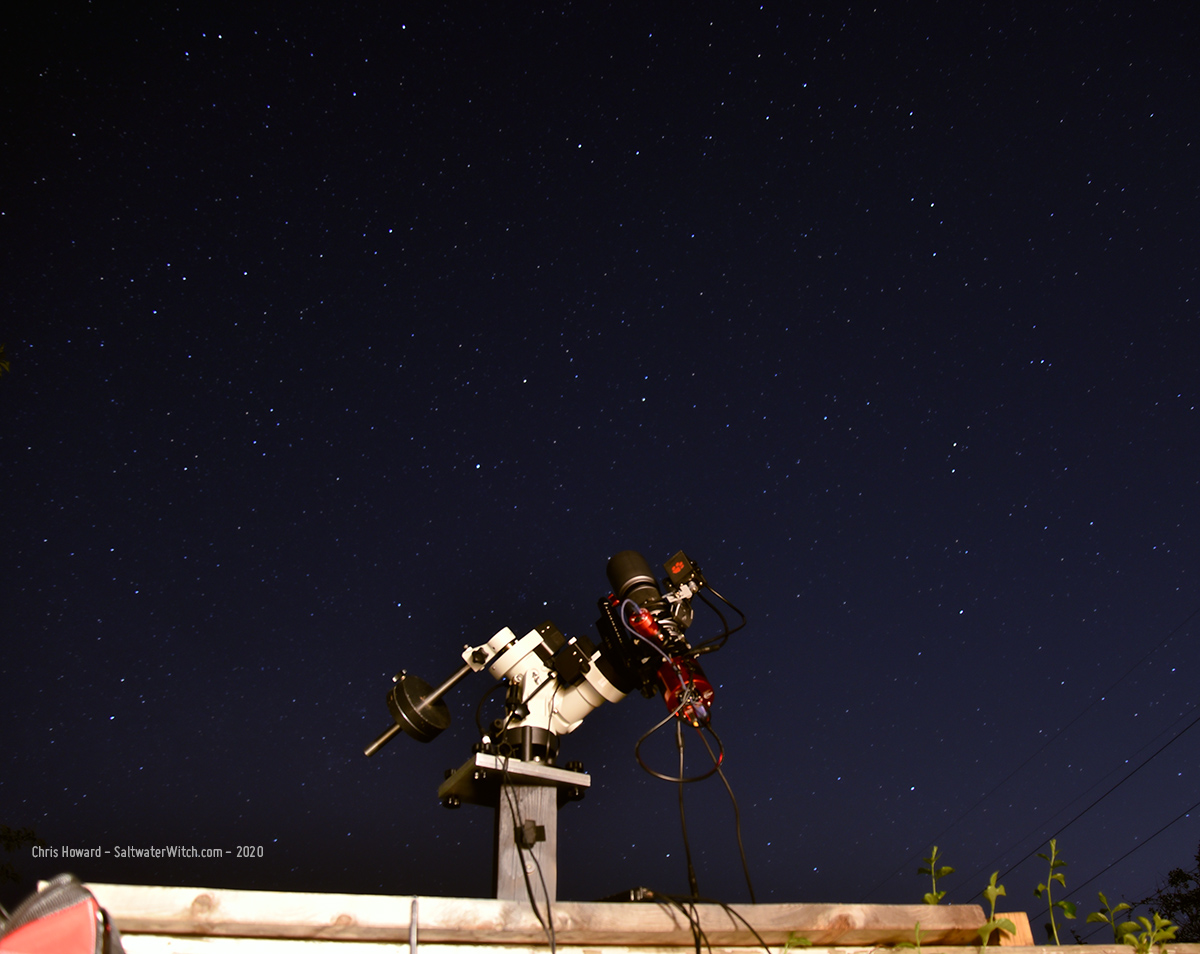 Screenshot of the N.I.N.A. UI during the M13 imaging run: 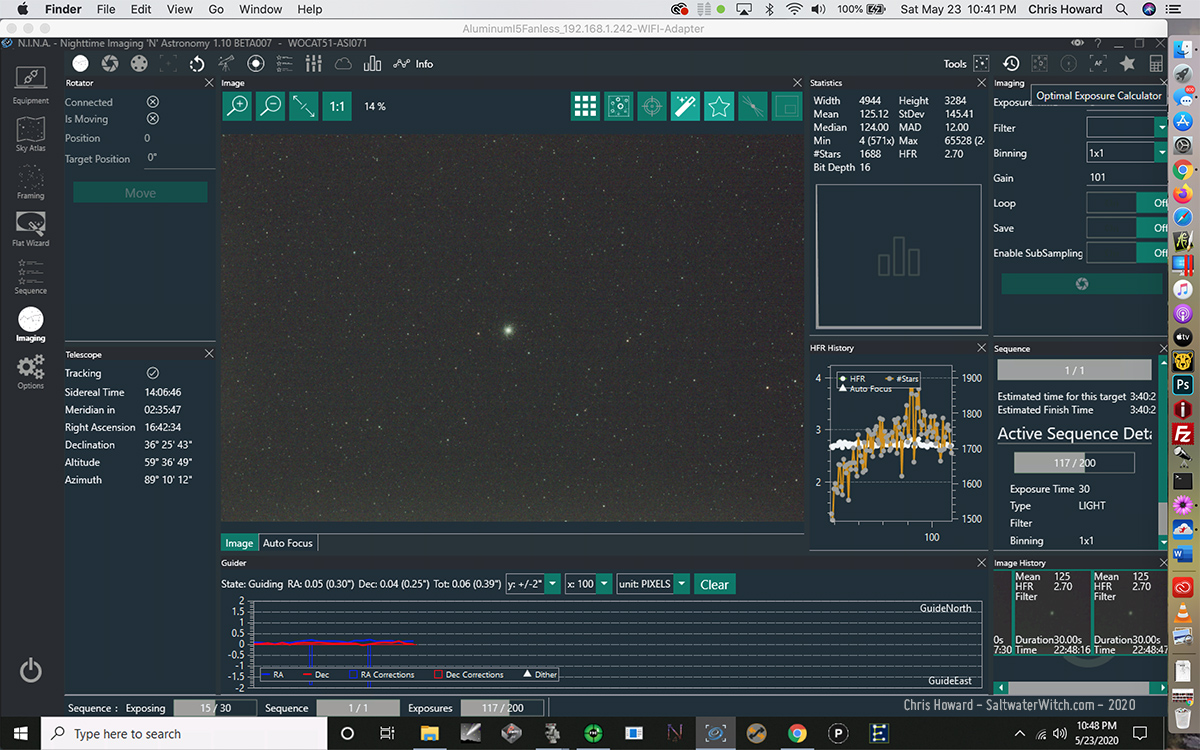