First night out with the Sky-Watcher EQ6-R Pro

My first night out with the EQ6-R was not without troubles, but none of those had anything to do with the mount. So, first time using the new mount and it performed flawlessly—easy setup, easy polar align (using QHY Polemaster) and guiding was reasonably solid—in the .7" - .8" RMS area. I will say I've been using EQMOD for years, and understand all the little quirks in the workflow that make it difficult—and even weird—for first-time users. I spent the entire night on a two panel narrowband mosaic of IC 1396, the Elephant Trunk Nebula, but didn't get enough data for the second panel. I'll post a crop of the first one below in hydrogen-alpha, stacked 71 x 480-second subs with the ZWO ASI1600MM-Pro and 6nm Astronomik Ha filter.

Before we get to IC 1396, I want to show off some pretty neat 30-second exposures I shot with the Nikon D750, a couple around midnight, and the last two around 3:30 in the morning, with the moon rising. 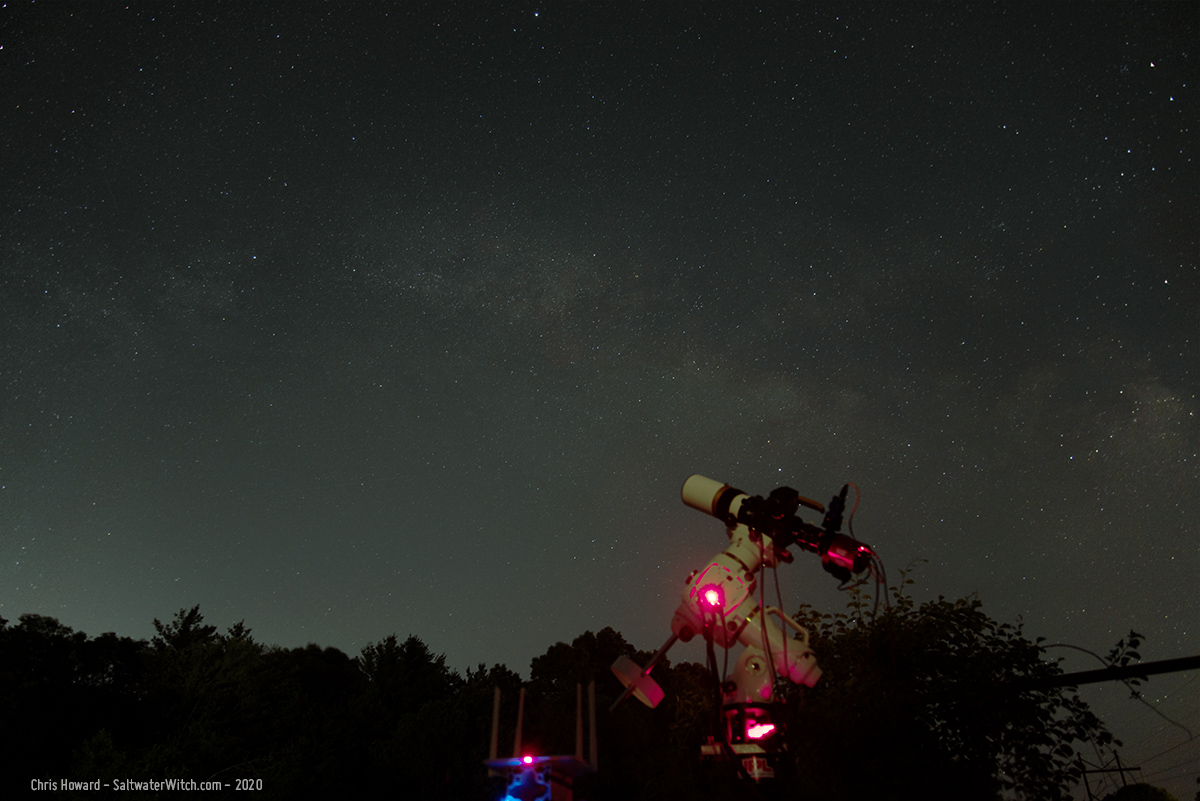 And this next shot is why I think we all need to get out under a clear and relatively dark night sky once in a while. I was just looking up in wonder, setting down the tripod with the D750 once in a while to take a 30-second exposure. I wasn't really thinking about what would be in the shot other than having my gear in the foreground--the focus isn't great in this one, but that doesn't really matter. It wasn't until this morning, looking through a set of these, that I immediately saw Cassiopeia (that W asterism toward the top left) and the double star cluster in Perseus below. And from there my eye just follows that ramp of stars in the constellation Andromeda to the right. If you walk up those three stars angling out from the end of my scope (just to the left)—one more step and you'll land on that softer smear of light. That's M31, the Andromeda Galaxy. If you look along the left side of the scope where that brighter red LED light emerges, there's a wedge of stars, like a slice of pizza, with the point closest to the scope. That's the constellation Triangulum. There's a dim dot of light up from the point star, angling toward the scope. That's M33, the Triangulum Galaxy. All of this was in the sky above me--above all of us in the Northern Hemisphere. There's so much more in this shot, but I would need to draw lines and write labels. What's actually going on in this shot--I mean, with my telescope, mount, cooled monochrome cameras and narrowband filters? I'm in the middle of taking 70-something four-minute exposures of a large HII region in the constellation Cepheus, which is above Cassiopeia--partially, with some of it off frame. 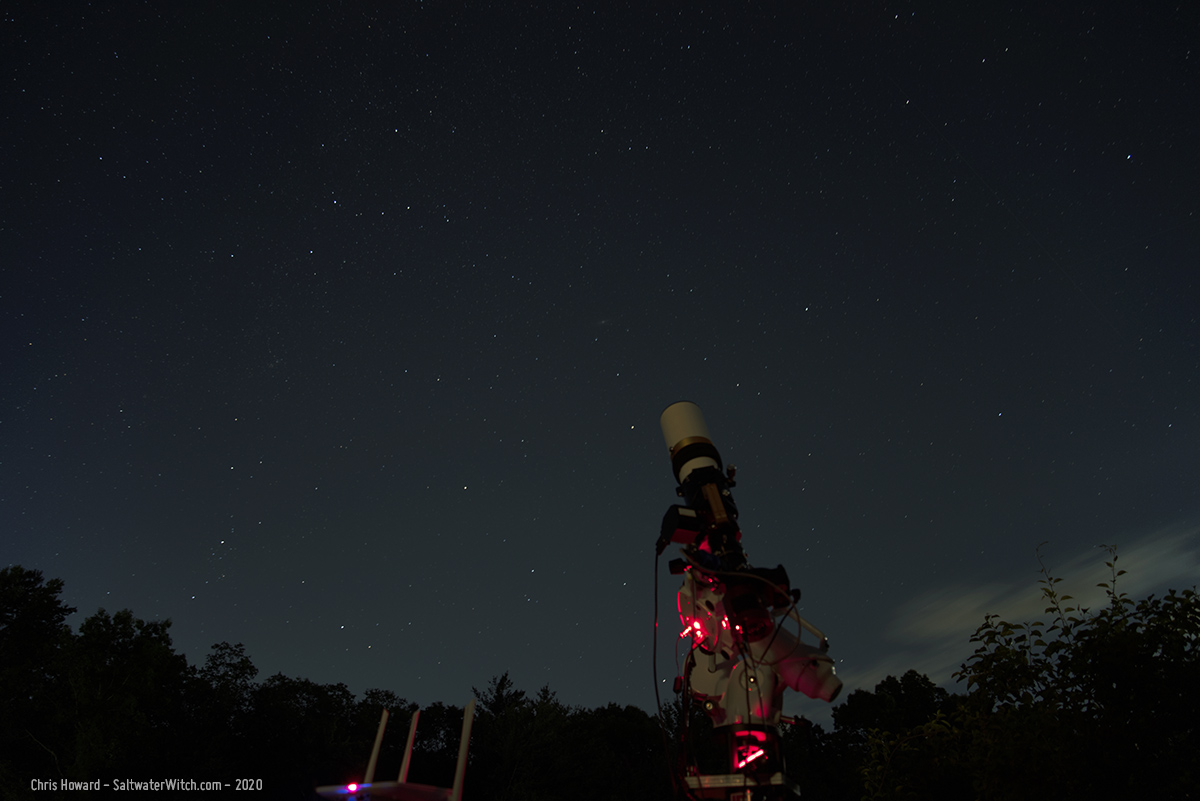 The moon was above 20° at 3am, with Mars just above it and to the right, and then way over on the right, that brighter object is Saturn catching up to Jupiter, which is out of frame, off the right side. 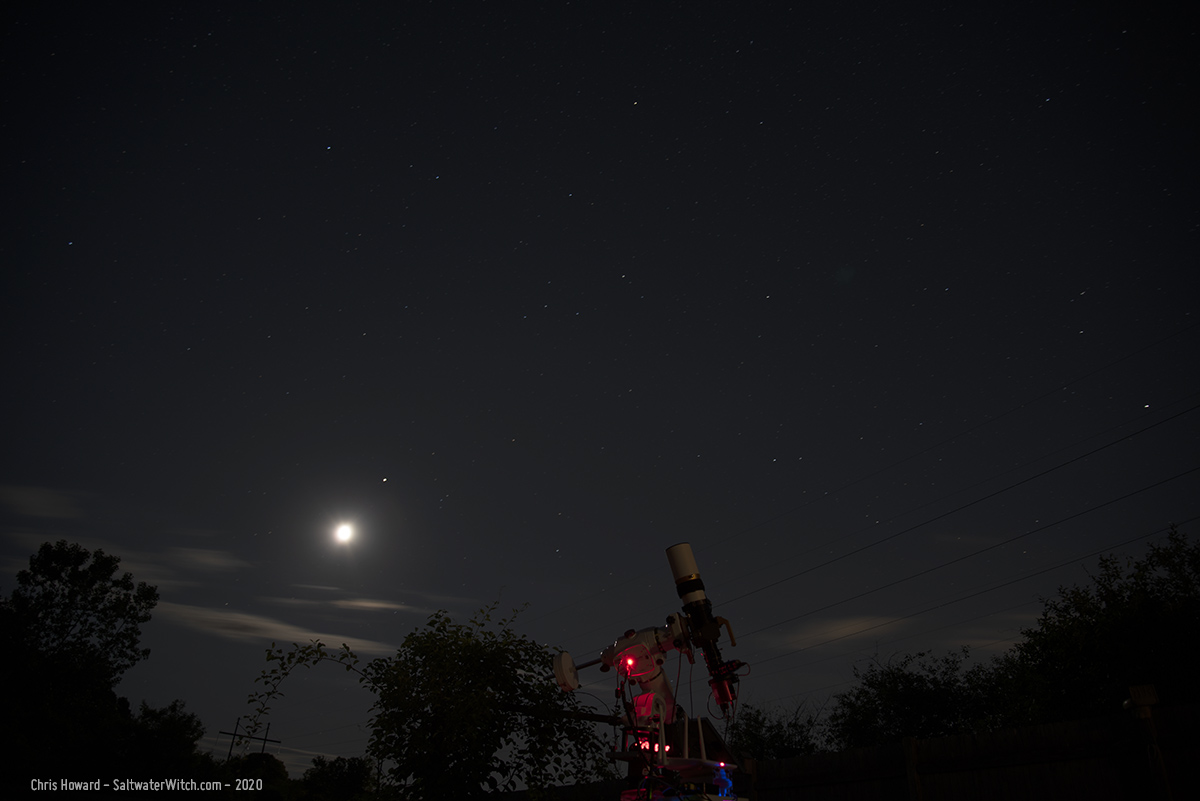 And finally, I had to take a shot with the William Optics GT81 blocking the moon's light: 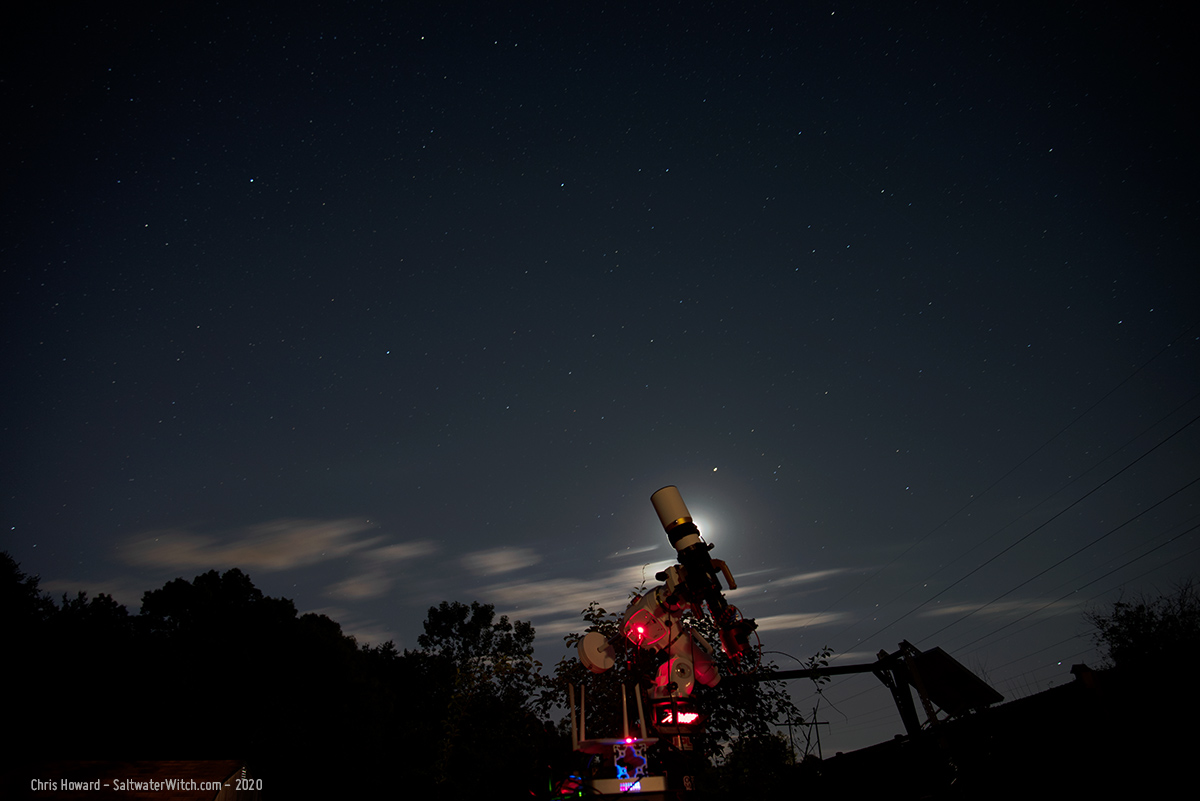 Here's a reasonably processed stack of 71 subs of IC 1396 in the Constellation Cepheus, cropped to show some of the Elephant's Trunk Nebula (structure on the left) and the clouds and filaments of dark interstellar dust (B161 is the large dark blob with wispy strands blowing off it toward the top) that drift in front of this massive region of ionized hydrogen—all that lighter gray stuff, basically everything in this frame except where it begins to thin out in the lower right. By "massive" I mean it spans 3 degrees in the sky. To put this size in perspective, the angle covered by our full moon is about 31 arcminutes or 1/2°. IC 1396 is 3° or 6 times the diameter of a full moon. And it really stands out in narrowband!

Side Note on Stacking: astro-imaging involves multiple steps, requiring many—I typically go with 20 - 100 Light Frames, which are the exposures you take of the astronomical target—the nebula, galaxy, IC 1396 in this case. (We say "sub-exposure" or "subs" because all of these will be combined into one primary exposure). Normally the Light Frames will be individually calibrated with additional exposures taken specifically to reduce or eliminate sensor read noise, fixed pattern noise, vignetting, dust, and other unwanted stuff. These are the Calibration Frames--Dark Frames, Flat Frames, Flat Dark Frames, and Bias Frames. Check out Cuiv's video (of Cuiv, the Lazy Geek astro channel) for more on calibration frames: https://youtu.be/UmmTuIEW94M 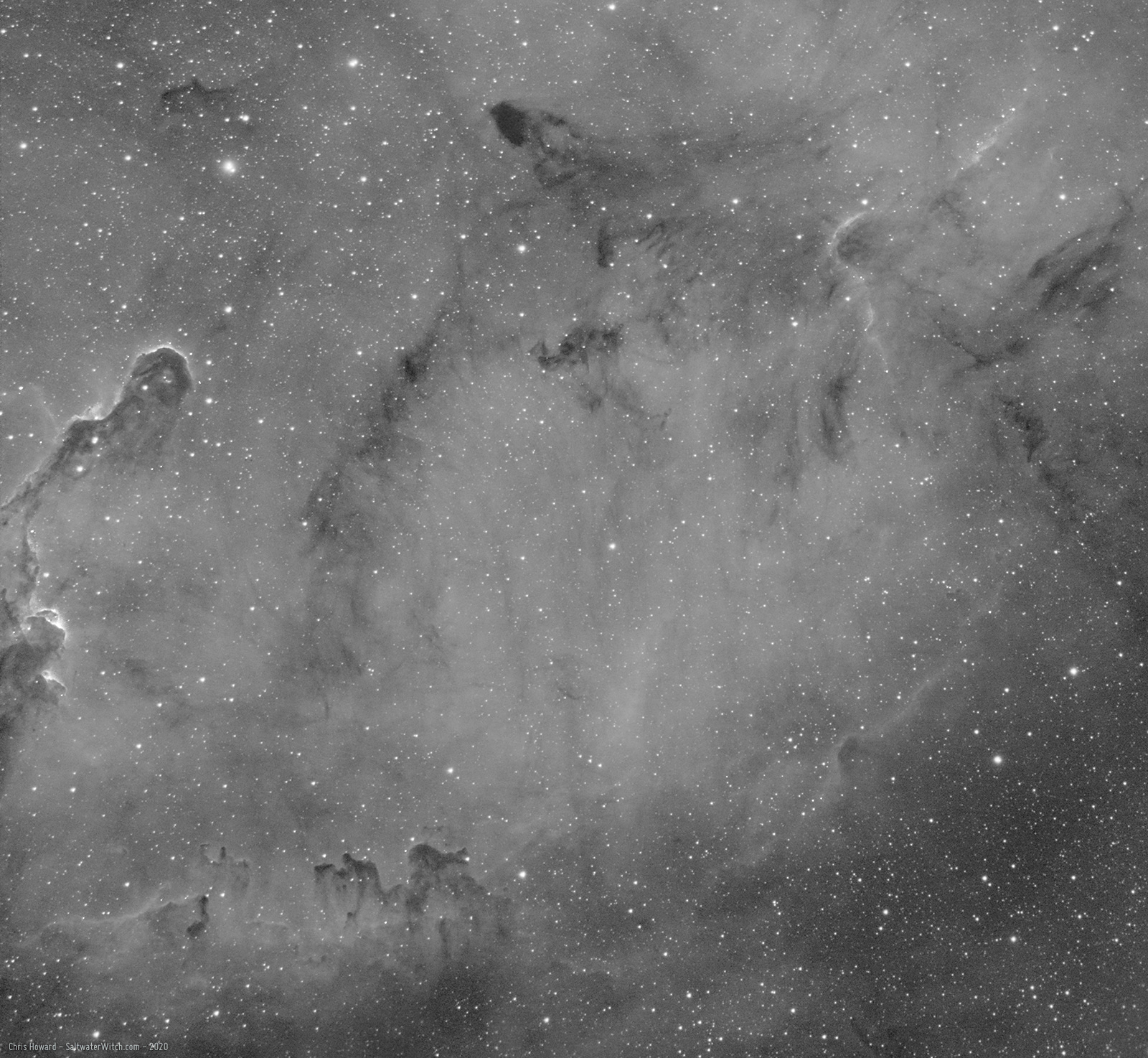