Second night out with the Apertura 8" Newt

I selected IC 5146, the Cocoon Nebula as a nice broadband color target for my second clear night with the Newt, and at 800mm focal length, the Cocoon should fit nicely in the frame, with room for the long trail of dust flowing away from it--if I can manage it.

Mechanics: the stars only look slightly better tonight, still wacky around the edges. They were a coma-induced mess last night, but I rearranged some of the imaging train and...it looks, well, not much better. But I'll get there. I am not the type to spend all night twiddling with spacers and digital calipers to calculate the correct back-distance and eliminate every last trace of coma. I'd rather image, and make small corrections along the way, even if it means the stars look like crap before I get things properly dialed in.

So, I was also looking for a nice target to shoot while the Cocoon climbed a bit higher in the sky, more than 30°, and I went for NGC 6946, Caldwell 12, the Fireworks Galaxy in Cepheus. I don't normally go for galaxies, unless they're relatively close by, but there are a few like M101 (Pinwheel Galaxy) and M81 (Bode's Galaxy) which are great targets if you're running with less than a 1000mm--other than the obvious ones like M31, M33, LMC, etc.

The Fireworks Galaxy is 22 million lightyears away. To put that distance in perspective, one lightyear is almost 6 trillion miles. I'll leave the multiplying by 22 million up to you. Fireworks is a medium-sized galaxy, about half the size of the Milky Way at about 40,000 lightyears across. It's a spiral galaxy, and it has the advantage, from our perspective, of being face-on, or is that top-down?  Notes: 31 x 120 second subs, no filters. 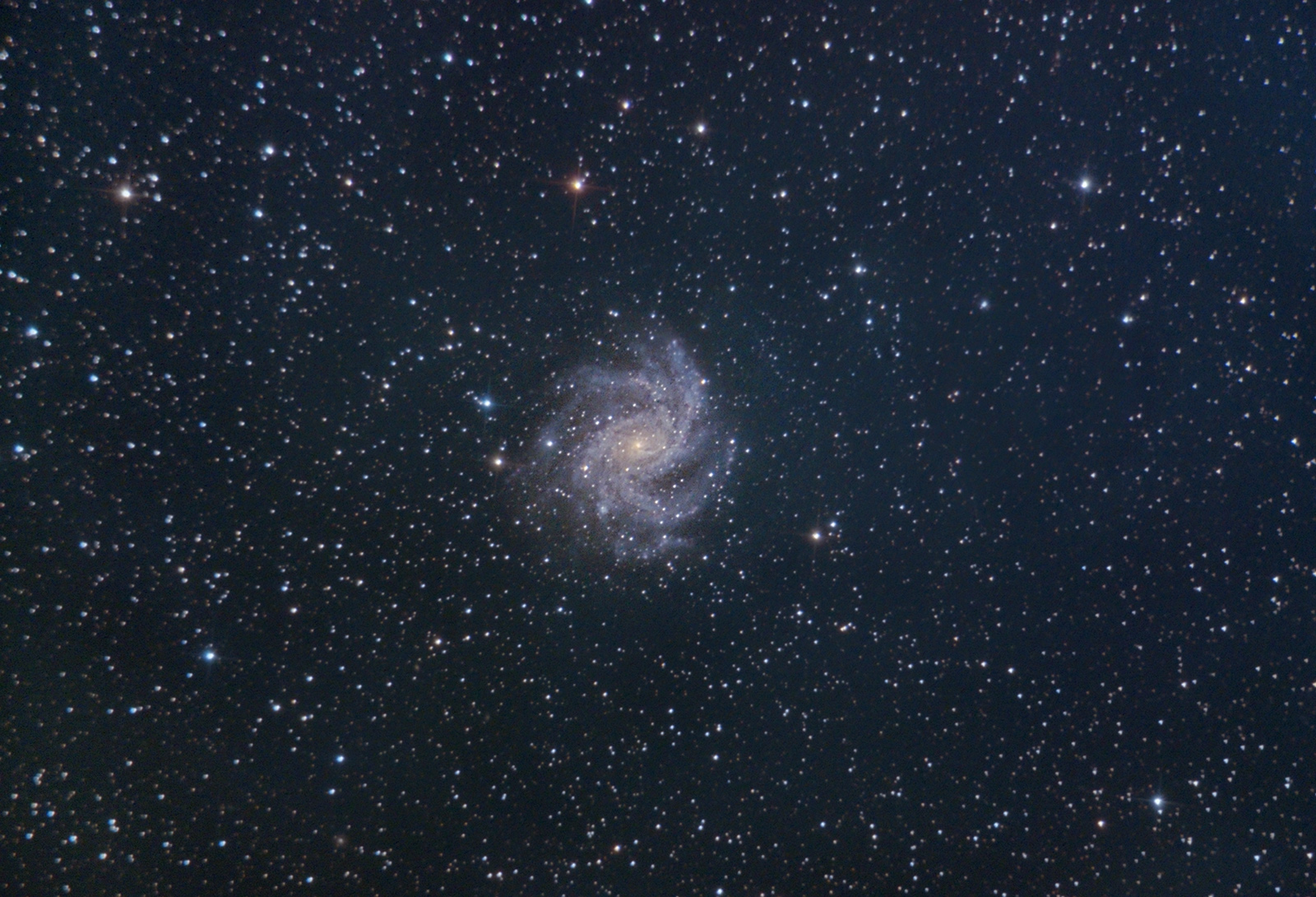 The Cocoon Nebula (IC 5146, Caldwell 19, Sh 2-125) is a roiling mix of new stars, ionized gases emitting light, mostly in wavelengths out at the hydrogen end of the spectrum, with additional layers of clouds of dust and gas lit up by those same stars. Actually, most of the ionizing weight appears to be carried by the central pre-main-sequence B type star, BD+46°3474. The whole circular structure labeled IC 5146 is a reflection nebula and an H ii region that forms a "cocoon" around BD+46°3474 (that bright star in the center), which is probably less than 10 million years old (compare that to our star, the Sun, at 4.6 billion years old). This central star's intense radiation and stellar winds have hollowed out the dense molecular clouds, and the radiation flowing off it is ionizing the material and lighting it up. There's a long dark band of gas trailing off frame at the bottom of this image that leads to a separately identified dark nebula, Barnard 168 (B168). The Cocoon is around 2500 lightyears away in the constellation Cygnus. Imaging Notes: There's so much going on here across the visual spectrum right on out to hydrogen-alpha and near-infrared. Most color astro cameras, DSLRs, and mirrorless cameras will be able to pick it all up. If you can, light pollution allowing, try to catch the Cocoon Nebula without any extra filters. My imaging run: 67 x 240 second subs, no filters. Apertura 8 inch f/4 800m FL Imaging Newtonian, ZWO ASI071MC color camera, GSO Coma Corrector, SkyWatcher EQ6-R Pro mount, Stellarmate/Raspberry Pi 4 running INDI/Ekos/KStars. 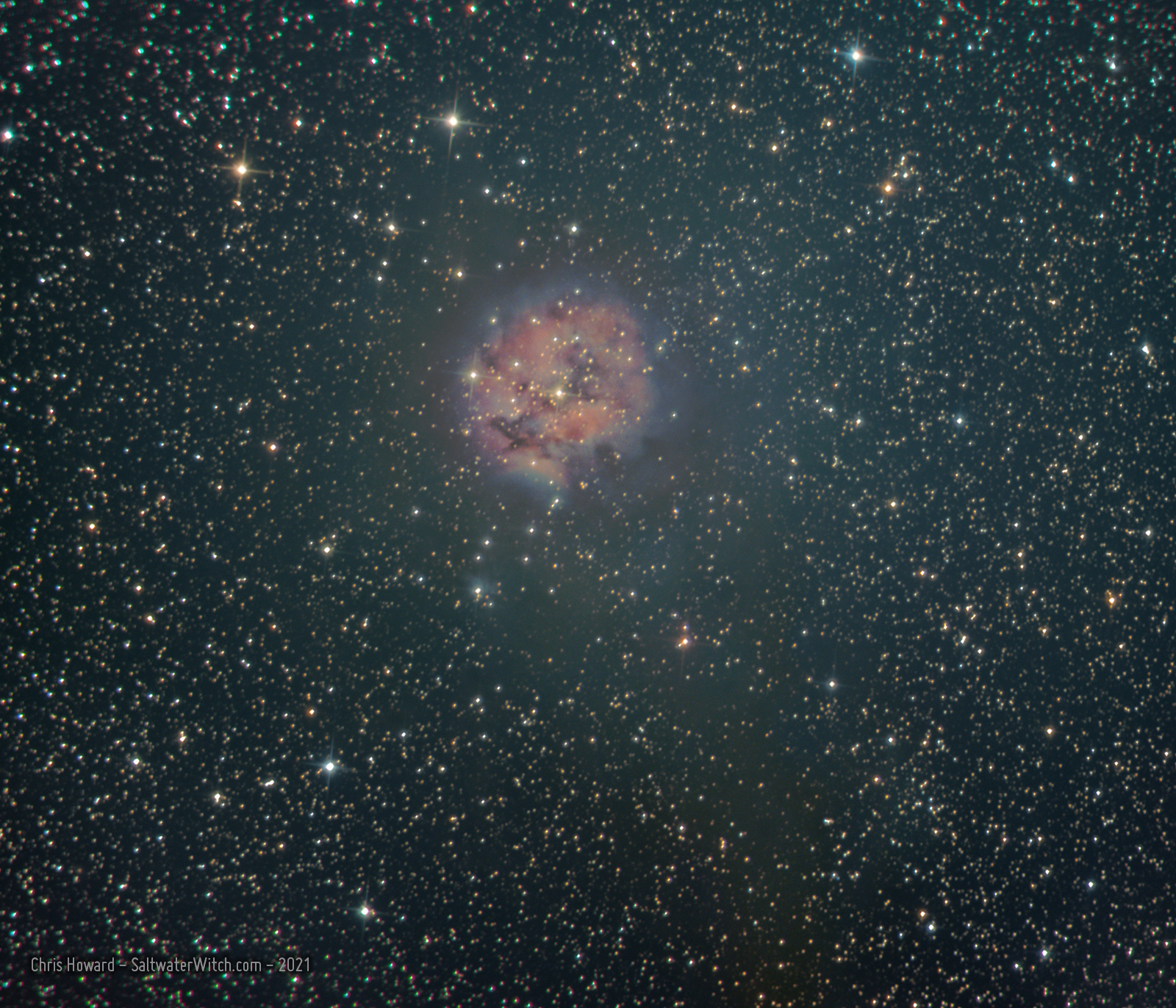