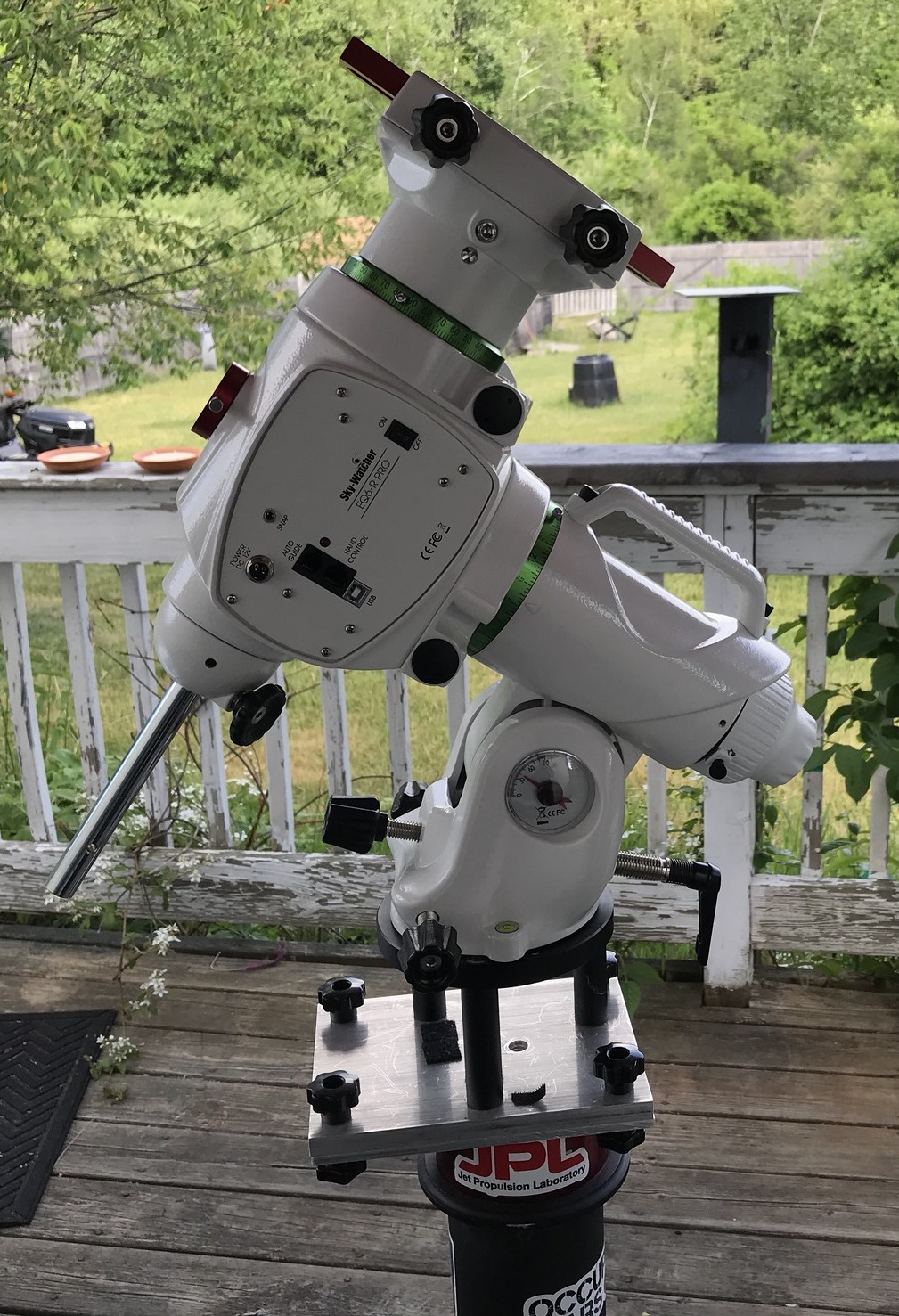 I just bought a new equatorial mount, a Sky-Watcher EQ6-R Pro, to replace the Orion Atlas EQ-G, and this is my first impression of the upgrade. I know I'm late to the party with the EQ6-R. It seems like I'm one of the few people on this planet without one.

Anyway, I'm deliberately using the word "upgrade" here because I think Sky-Watcher has made some significant improvements to this line of mounts—I'm including both the NEQ6 lines and Orion Atlas EQ-G. They didn't simply slap on a thicker coat of paint, add a fancy latitude dial under glass, and call it a new mount. There was a lot of thought that went into some of these improvements, some of them minor but great to see.

Starting with the tripod, it looks like Sky Watcher took their existing sturdy base with the 2"/50mm legs and extended the swing of the three pivot points—just a bit, giving the whole thing a broader and more stable stance. I believe this was rolled out with the NEQ6 line a while ago—maybe a couple years, but never made it to Orion. As far as I know the Orion Atlas EQ-G still has the narrower, slightly less stable design, but the Orion Atlas II will have the tripod upgrade (Orion OEMs the Sky-Watcher mounts, adding their branding and colors—black and silver instead of white and green).  Stability improvements in the tripod is what I like to see. It's a minor enhancement at best, but it means someone at Sky-Watcher is thinking about the details, the small stuff that will add up to make the whole much better--noticeably better.

The first time I slewed with my Orion Atlas EQ-G the high-pitched whine of gears surprised me. Until I realized that was normal. I don't really notice it anymore, but compared to the smooth and quiet operation of other mounts like my iOptrons, it's enough to frighten new astronomers. At their core, all of these mounts using worm gears for RA and DEC will have some backlash, but with belt-driven mechanics, the gears can remain engaged to some extent and backlash will be reduced. Periodic error will also be reduced. So, quieter slewing, reduced backlash, lower periodic error. Thank you, Sky Watcher.

There are a couple nice improvements to the EQ6-R Pro front panel. 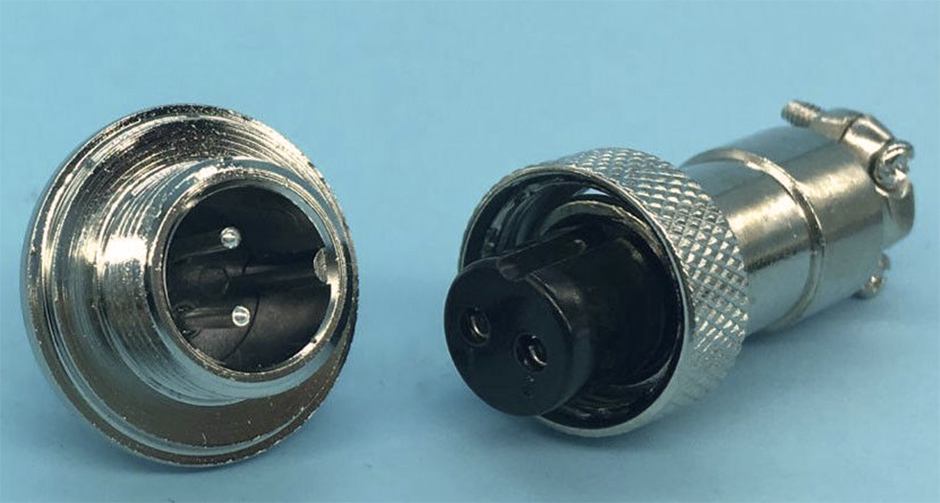 The power connector upgrade to a threaded aviation plug that allows you to easily connect and secure your 12v dc cable is an interesting improvement. I have never had a problem with the 5mm jack falling out, but I've heard that others have, so this approach definitely works, even it uses less common hardware: a GX12-2 pin aviation connector. I have seen reviews from the UK where Sky-Watcher included a 4 amp power supply with the mount, but the version I bought in the US only includes the power cord with the 2-pin connector at one end and a 12vdc "cigarette lighter" connector on the other. I immediately cut that off and soldered in a female 5mm jack—that works so much better for my power situation. 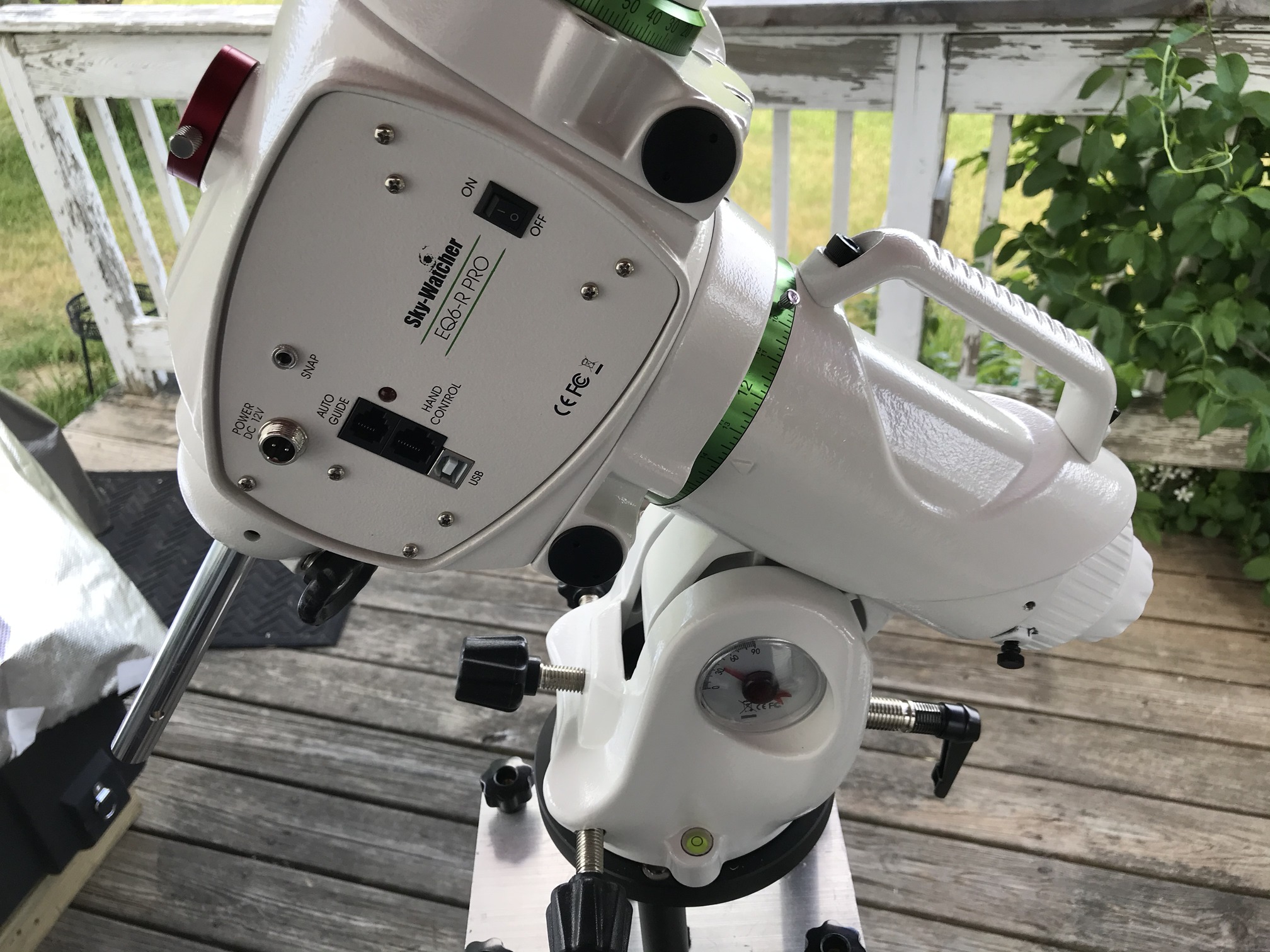 I know there was a first generation EQ6-R that did not include the USB type B port on the front panel--see the pic. This doesn't impact mount operations or control through EQMOD or INDI, but it's definitely a nice upgrade that doesn't require proprietary cabling—any USB A to B cable will work. Again, small but significant. The DB-9 serial port on the EQ-G has always worked well, and I'm sure the serial comms through the RJ-45 jack (the one used for the hand controller in the EQ6-R) works equally well. The USB port on the front panel is another minor but useful improvement--see, these are adding up. 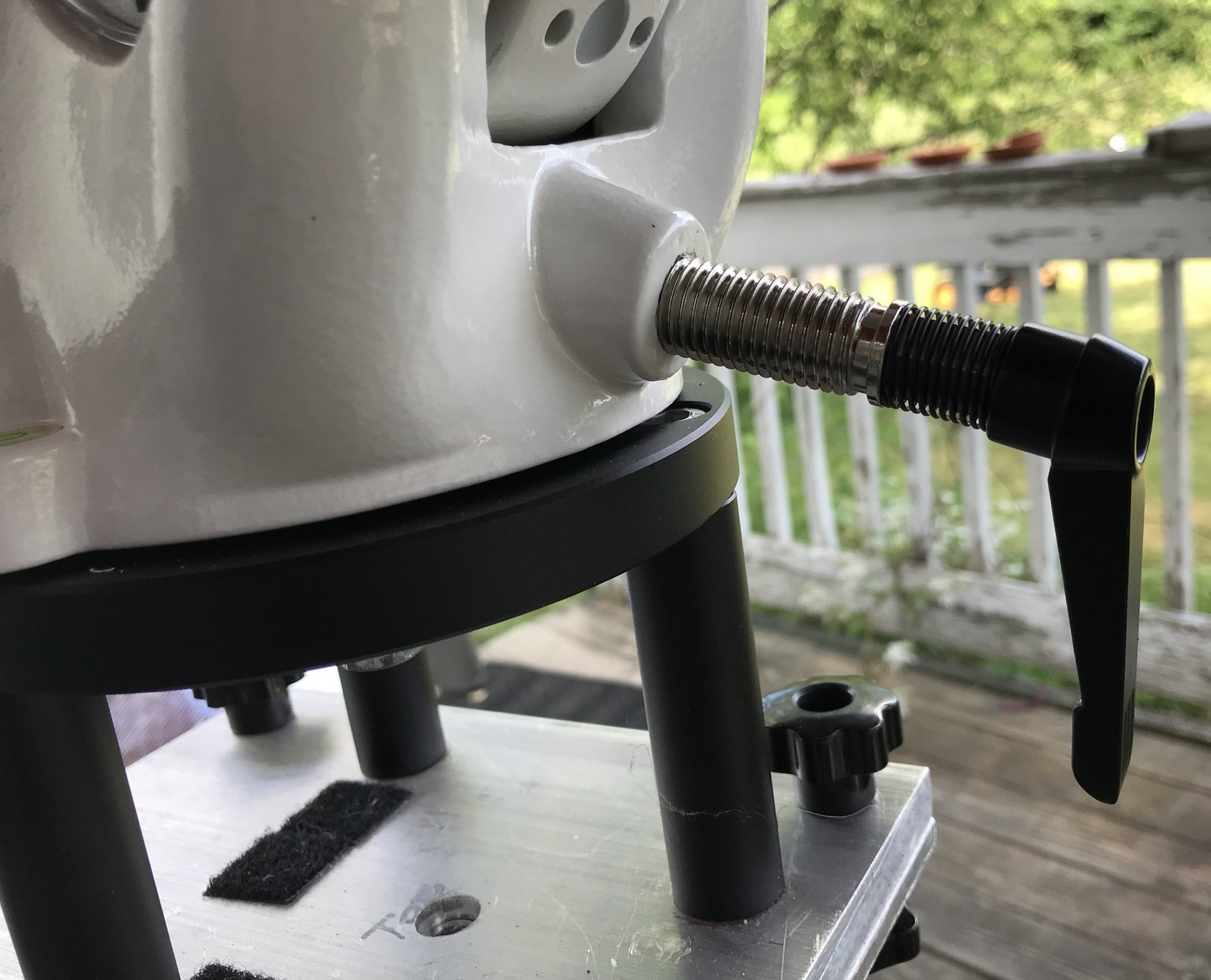 The altitude adjustment upgrade is the real winner for me with the EQ6-R Pro, even if they are essentially using the same design, with heavy-duty bolts pushing against a thick metal tab that sticks out from the bottom of the central RA axis component. I have not put this mount through a serious imaging session yet, but through several setups, alignments, and adjustments, it seems like a significant improvement over the altitude adjustment mechanism in the Orion Atlas EQ-G. Oh, and the big chunky knobs and increase in the diameter of the bolts is so nice to see.

Okay, the old wobbly skinny counterweight shaft must go! I can only assume that some exec at Sky-Watcher, a former engineer, designed this thing back in the day, still thinks it's the coolest thing, and they refuse to let it go. Seriously, Sky-Watcher, I have heavier duty counterweight bars on my star tracker. It is so out of place on this heavy duty mount. Out of the box, and without some mods, the bar wiggles back and forth and can seriously affect your system on a meridian flip. There's a "clunk" when the mount moves to the other side and the weights shift. It doesn't matter how much you tighten down the locking knob—that just acts as the pivot point between your weights and the rest of the counterweight bar above. I ended up removing the saddle, taking out the counterweight bar and wrapping electrical tape around the top—so there's a slightly tighter fit within the DEC column. I also removed the locking knob completely and took out the concave piece—a thrust pin? This piece of hard plastic or metal sits loosely between the end of the threads and the counterweight bar. Its purpose seems to be keeping the chrome finish free of marks? Whatever its purpose, it dramatically reduces the ability to lock the bar in place. I've managed to almost completely remove the wobble on the counterweight side by removing it. 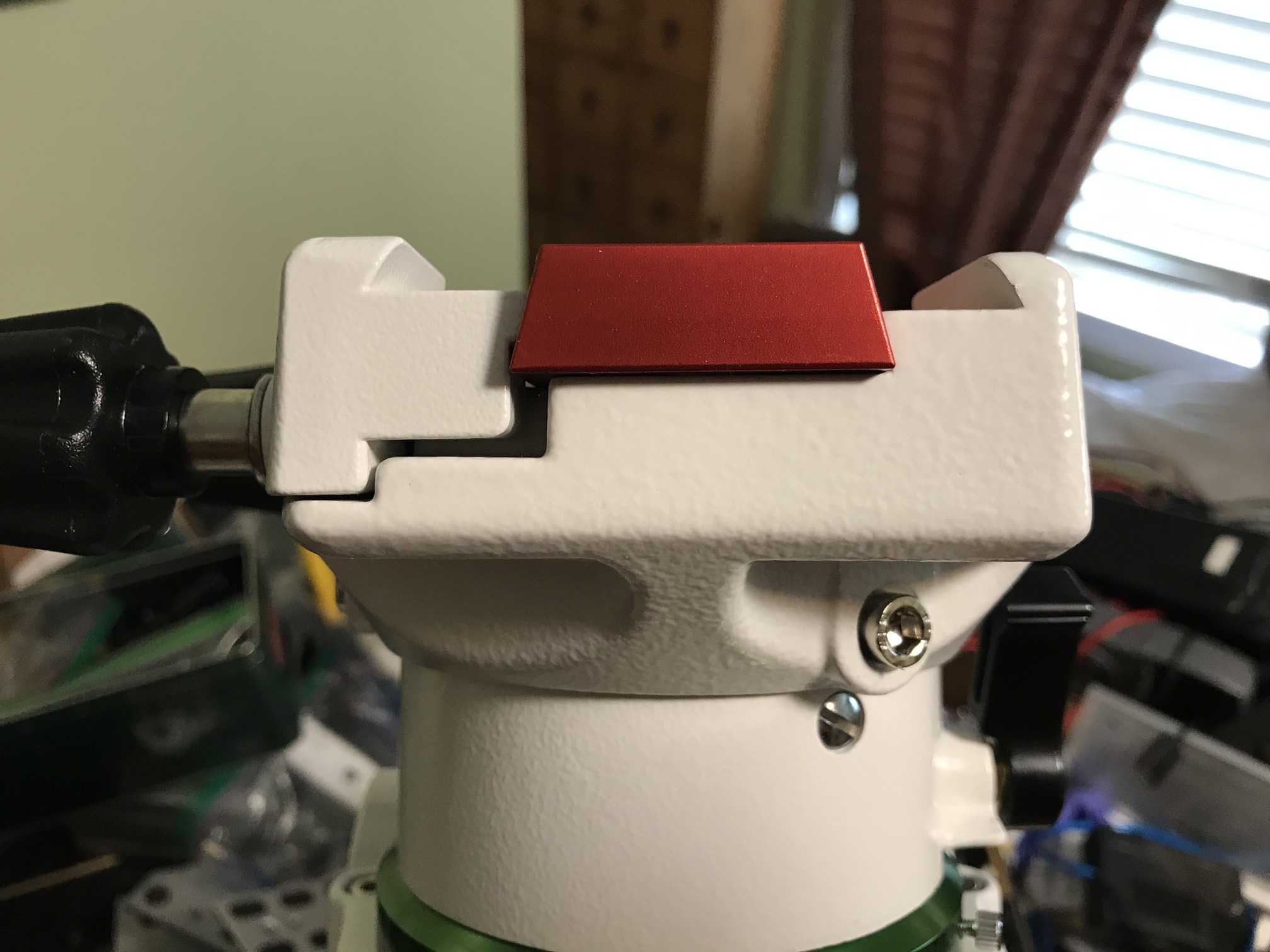 The saddle is a bit disappointing. But unlike the counterweight shaft, which is a mess right out of the box, and could use an upgrade, the EQ6-R Pro saddle is perfectly fine if your scopes and OTAs have Vixen style dovetail bars. However, I don't know if I would trust it with the wider Losmandy dovetail plates. (Or I might go with a beautiful ADM machined aluminum replacement). The problem is one side of the stock Sky-Watcher saddle is noticeably taller--offset vertically--from the other side of the saddle, and the wider plates will sit in the saddle at an angle. I'm not sure what happened here with the design or manufacturing, but someone wasn't paying attention. Again, not a problem for Vixen dovetail bars. And I also want to add that maybe this doesn't affect all the EQ6's? I noticed that Chuck has his RASA 8 on an EQ6-R Pro with the wide dovetail bar, and it looks fine. 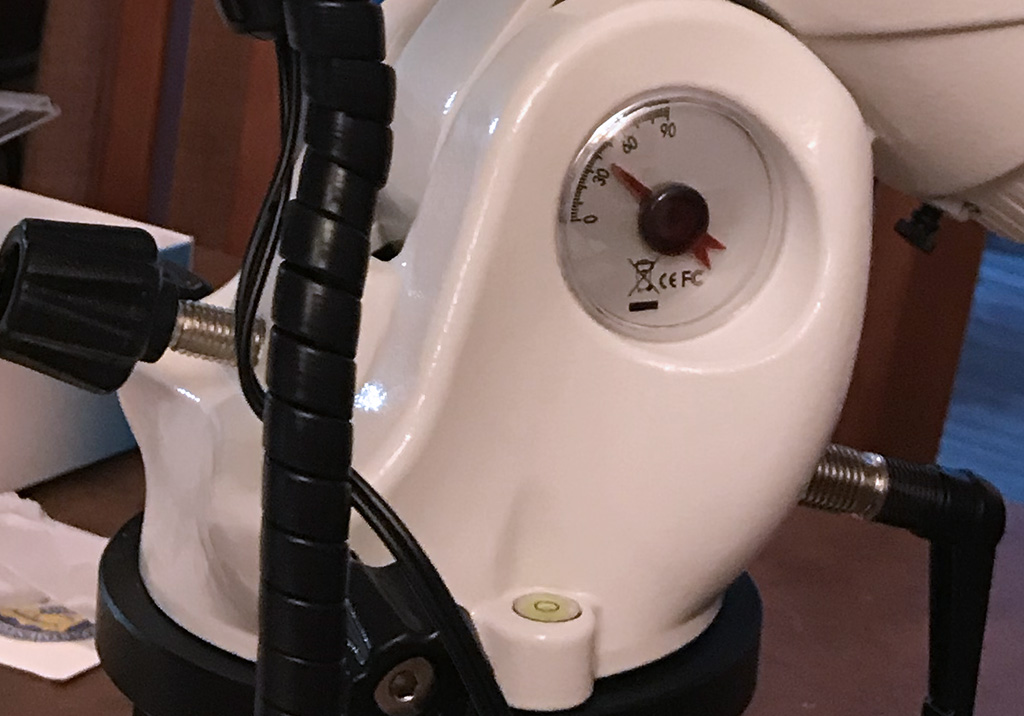 There are some new features that are not really important to me, but may be to others. One is the latitude dial, which seems a bit decorative and maybe too fragile for the mount. It's an interesting addition, but not really useful for my setup. I image almost exclusively from my backyard, so I probably won't look at this again. I use a lighter mount like the CEM25P or the SkyGuider Pro when I want to shoot from other locations. The second is the Snap shutter-release port for DSLRs and Mirrorless cameras. I rarely use either for astro-imaging, so I'm not sure how significant this is. But it is a new feature and it seems important, so, well done Sky-Watcher.

That handle! Holy crap, why haven't we had a handle all along? With the mount head alone coming in at 54 lbs/25kg, setting up the EQ-G was always a chore. It was like carrying heavy ordinance around your house and into the backyard, hoisting it onto the tripod—I mean, what the hell? We're just doing some astro-imaging here, not arming a B-1 for a serious bombing run. But that's what EQ-G setup has always felt like. Yes, if I have to call out a feature I'm happiest with—other than the new and improved altitude/azimuth adjustment--it's that handle.

At the end of night (see what I did there?) what matters is how well this mount functions for our purposes, how well it will fit into our existing astro-imaging workflows, how easily it will be to pick up and use reliably for new astro-geeks. I am assuming most of you are into astrophotography, and the EQ6-R Pro is a great choice if you're looking for a fairly inexpensive, moderately portable mount that can handle a wide range of sizes and weights for refractors, SCTs, Newtonians, and RASAs. If you're coming from an Orion Atlas or NEQ6, you will be very comfortable with this upgrade, and very happy with the improvements. I also think this is a great mount if you're new to astrophotography. The EQ6-R Pro is the perfect balance of weight, stability, and accuracy with versatility. I just can't think of an example, except maybe the ability to hike miles carrying your astro gear, where this mount isn't going to help you out or improve your imaging. The community of EQ6-R, NEQ6, and EQ-G users is massive. Sky-Watcher builds thousands upon thousands of these mounts, and there are so many users out there—around the world—who have the answers to any possible question or concern you might have. The ASCOM and INDI support for this line of mounts is very solid, and arguably the most thoroughly used and tested of any of the mount control systems. Even if EQMOD is a little clunky and outdated looking, you will find it easy enough to use, and the support you will receive from other users—because there are so many—is invaluable.

So, there you have it, you've done a phenomenal job with this round Sky-Watcher. Just lose that crappy counterweight bar in the next and I'll be back for another upgrade!

NOTE: As of this writing, the EQ6-R Pro is on sale at OPT, where I bought mine. Go get one!