If you have seen some of my videos and blog posts on the Cat you know I have two astro camera trains, one color, one narrowband. This one consists of a ZWO ASI1600MM-Pro mono, ZWO ASI filter wheel with Astronomik 6nm HA, OIII, and SII filters, along with a CLEAR in slot one, and a near-IR filter in the fifth position. 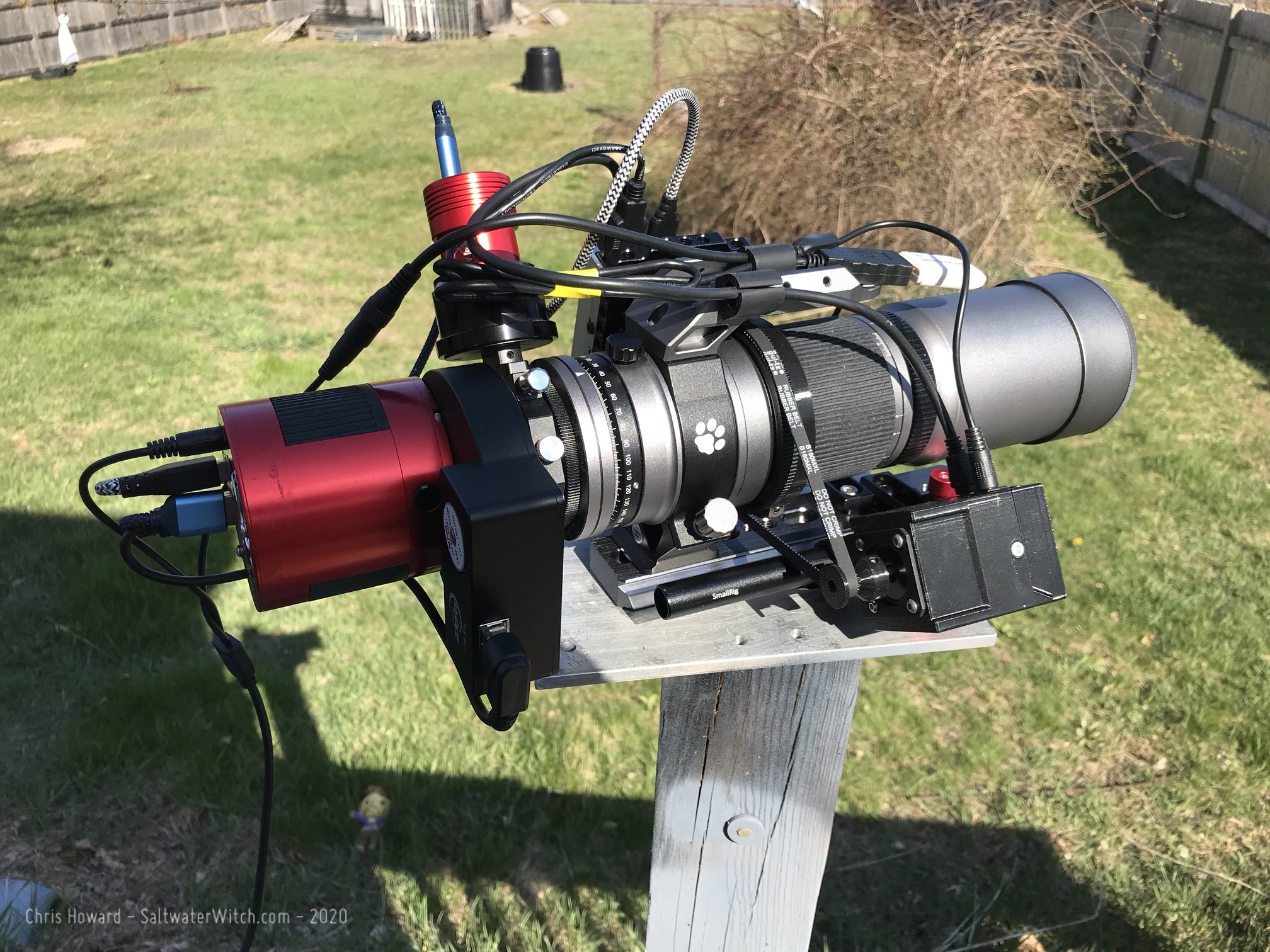 Another reason I want to show off this setup is the single-power wire config. Everything else is on the scope or controlled wirelessly--for example, the iOptron CEM25P or my Orion Atlas can be controlled by Ekos through wifi or bluetooth. 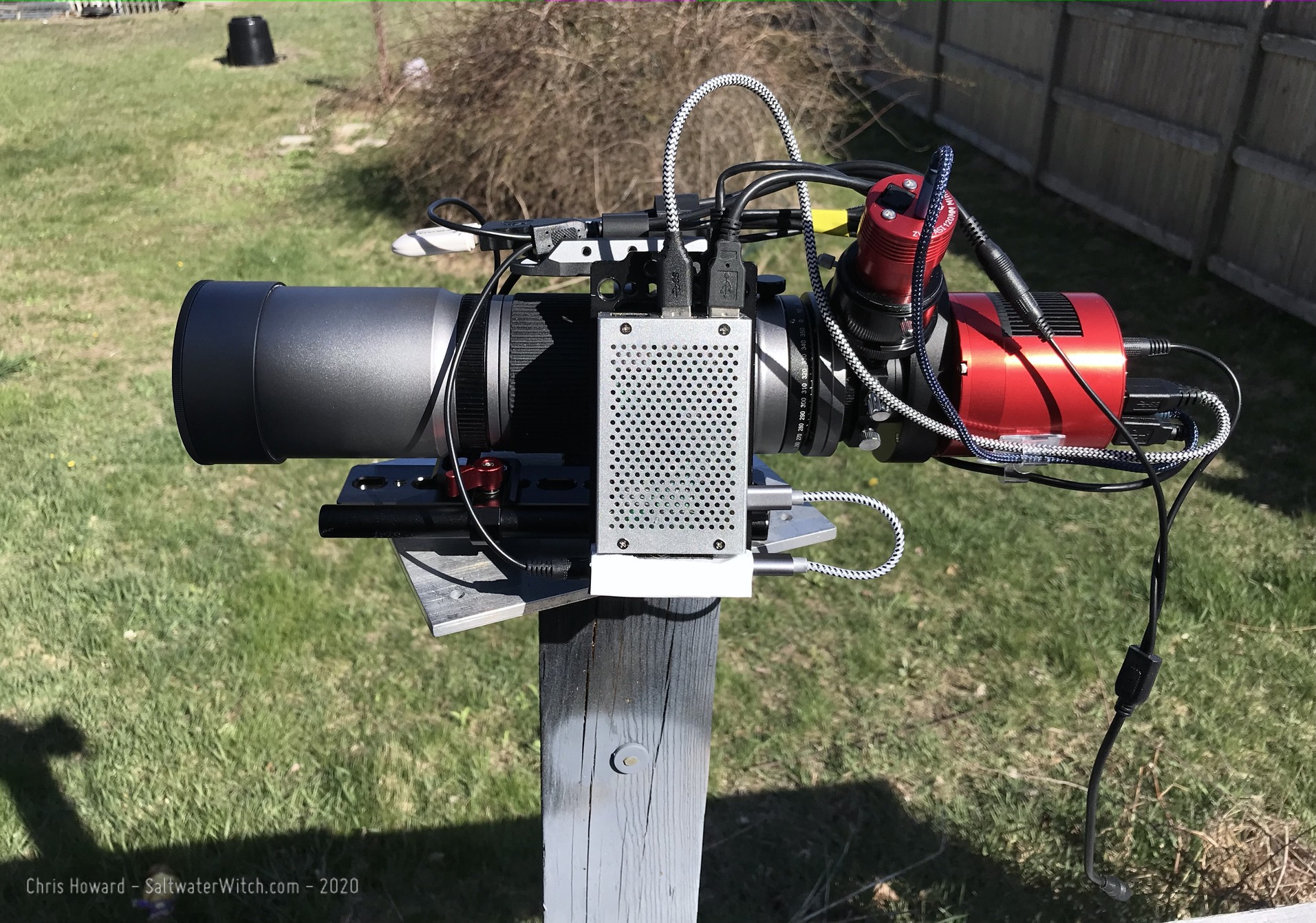 I shot some beautiful color images earlier this year and late last. I'll show M31 and a couple others later, but with that color setup I was running multiple power cables and a heavy duty USB cable to the scope, and although this is setup, which I will try out as soon as it clears up, looks a bit cluttered, I want fewer cables running from cameras, controllers, focusers, and other devices. Fewer cables reduces the chance of one of them hanging up on the mount, or swinging just enough with a gust of wind to throw guiding off.

The controller--the aluminum box on the left side is a Raspberry Pi 4 with 4 gigs, running INDI, Ekos, KStars. I remote into this just like I would with with Windows to run Sequence Generator Pro. The only difference is this box is mounted to the scope. I am looking at running my Windows-based astro controller and sequencer stuff on a similarly small single board computer, and then I can just swap out one system for another. 4 USB ports on the Pi, though, really does make things easier. 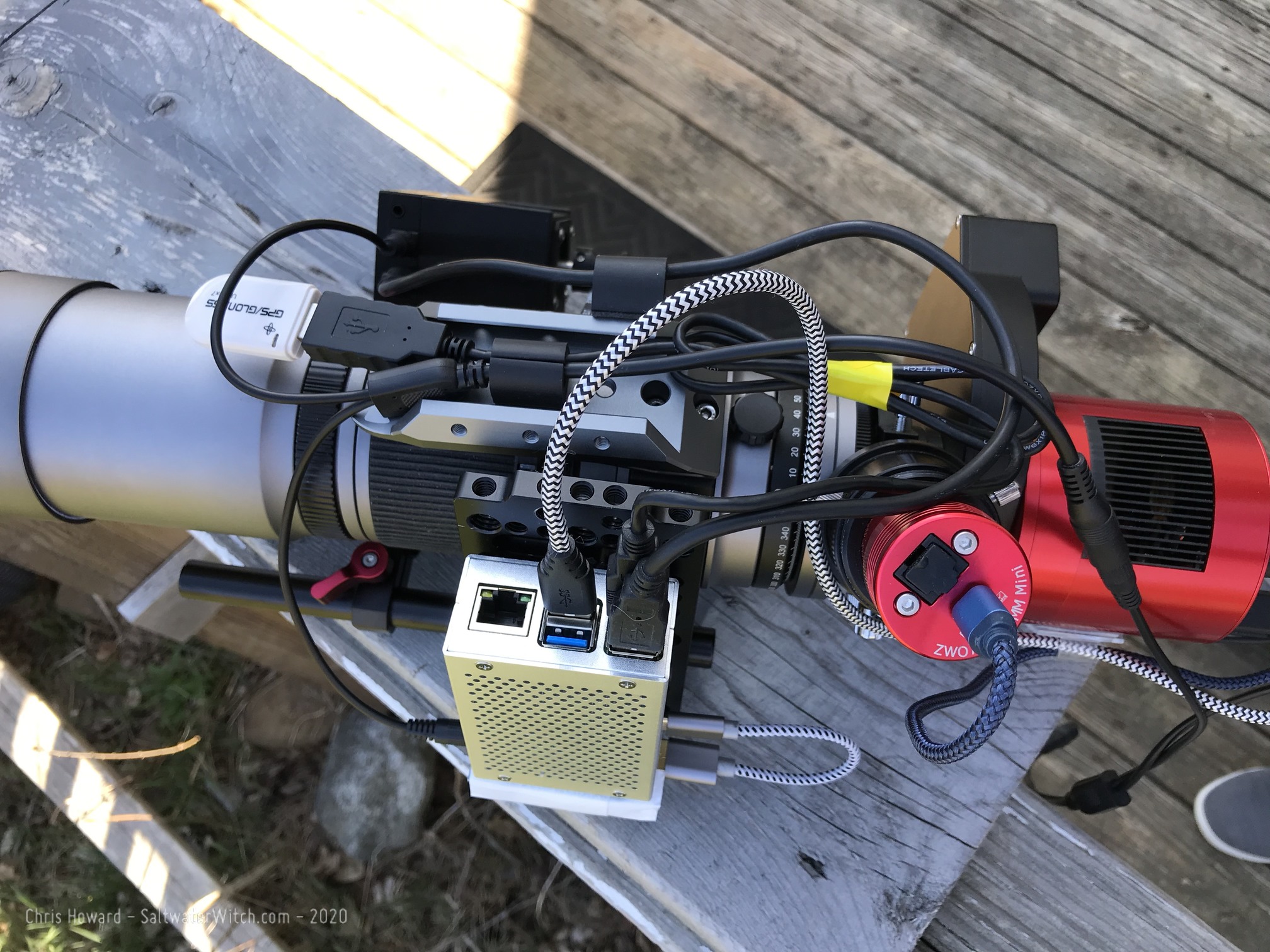 I am using the DeepSkyDad AF3 belt-drive autofocus, with the helical focuser timing belt ring made for the cat. I think Pavle at DeepSkyDad sells the components by themselves if you're interested in doing something like this. The rest of it is made up of various SmallRig camera rails, clamps, and support pieces. 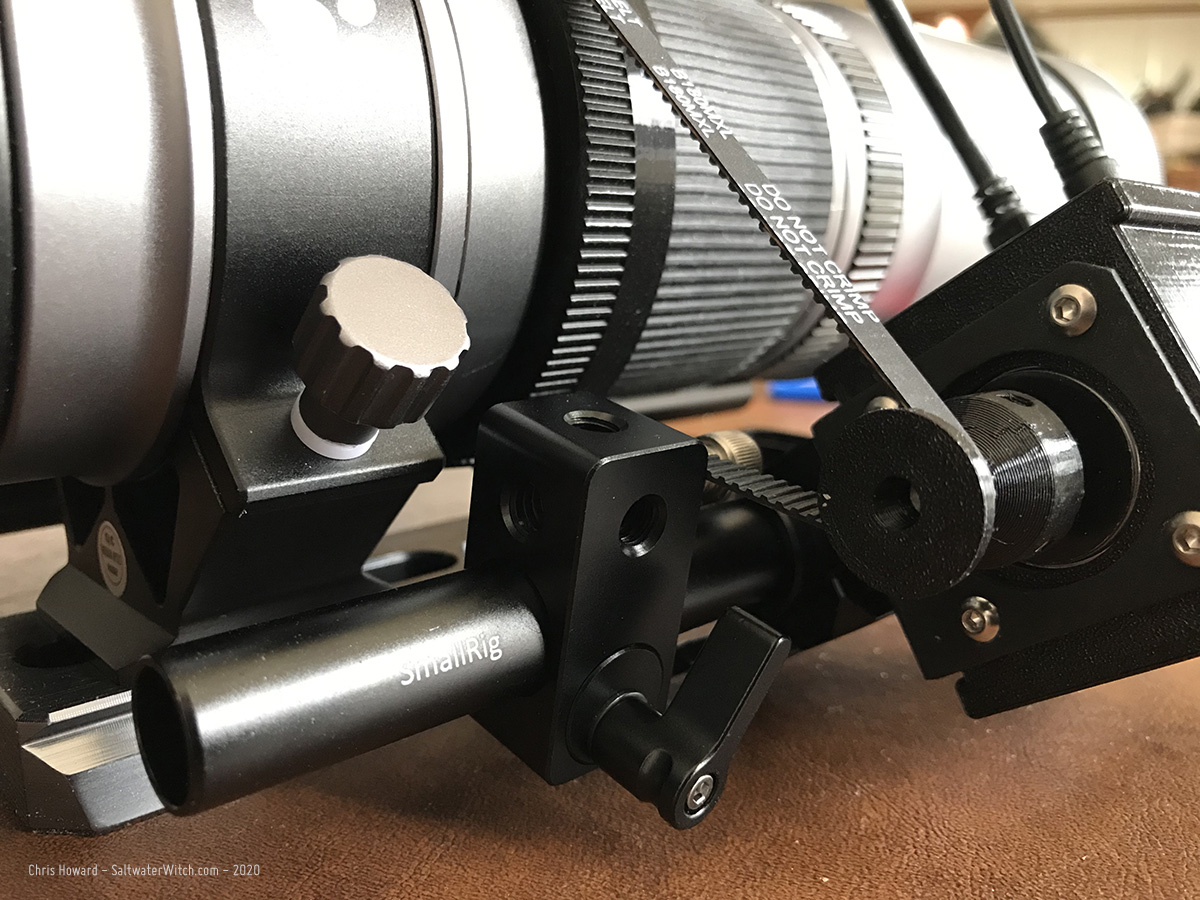 I also have GPS via a USB dongle to automatically get accurate date, time, longitude, latitude, and altitude for Ekos and KStars.

Of course, as is typical, I'm ready to go and the weather's supposed to cloud over in the next couple hours, right around sundown. Hmmm. It's almost as if there's a conspiracy.

I don't normally need dew control this time of year and maybe halfway through the summer, but I will add a dew heater when I need to, but still keeping with a single 10 - 15 amp 12 volt dc line in, and I'll see if that's enough to drive all the devices. Planning this stuff out is half the fun.

That white rectangular shape under the Raspberry Pi is a DC step down converter, taking 12v dc to 5v at 5 amps. The Raspberry Pi 4s need a bit more current then the older 3s. 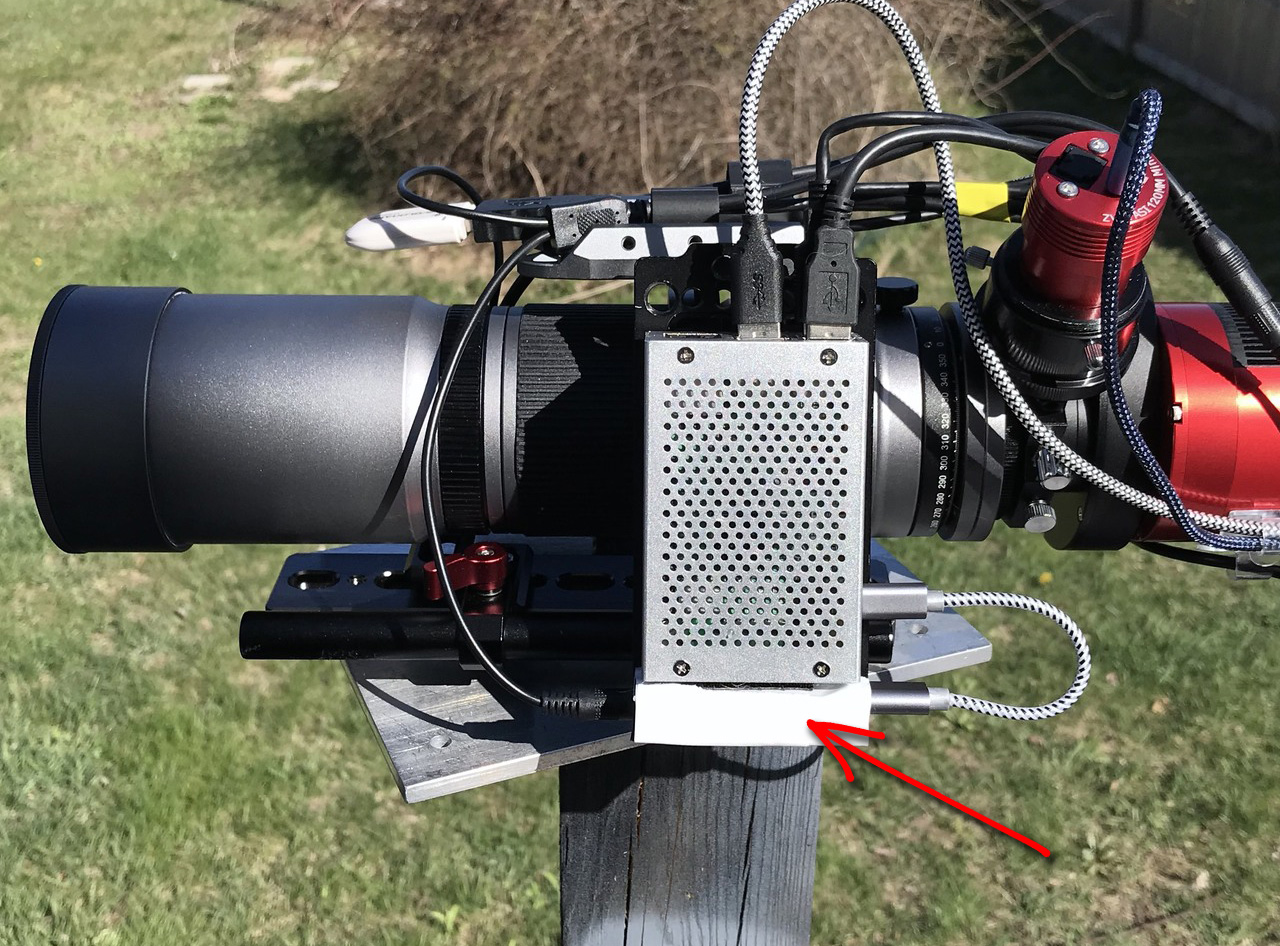 Before I pack it up, I want to show off a couple astro images from a couple different imaging runs.

The first is the Rosette Nebula NGC 2237 in Monoceros, a large circular HII region. The open star cluster NGC 2244 has formed out of—and continue to form out of—the Rosette's abundance of hydrogen and other materials. NGC 2237 is about 5000 lightyears away from us, and it's about 130 lightyears across. That's Sh2-280 on the right, a dim diffuse nebula. Another one from my backyard with the William Optics SpaceCat 51 250mm FL APO refractor, iOptron CEM25P EQ mount, ZWO Astronomy Cameras ASI071MC cooled color camera, Celestron UHC/LPR filter. 13 x 2-minute exposures, 4 x 8 minute exposures. 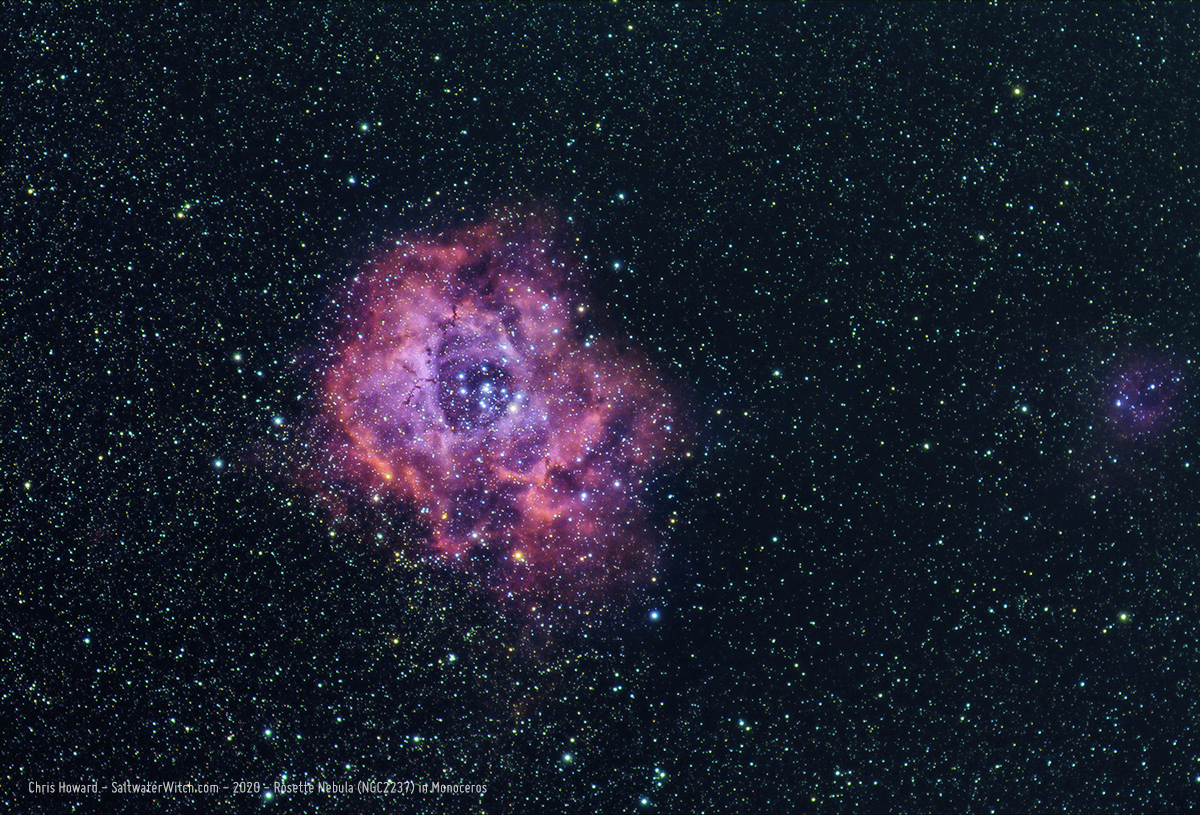 One more from my backyard with the WilliamOptics SpaceCat 51 refractor and the ZWO ASI071MC camera: the grandest of the galaxies, Andromeda, M31. Of course, there are millions of incredibly beautiful and strange—and even downright bizarrely structured galaxies out there in the universe, many within normal telescope distance, but in my opinion they don't come close to M31. You could argue the Pinwheel Galaxy (M101) is in the running because it is so perfectly positioned from our perspective, a wonderful top-down view of a spiral galaxy. But Andromeda is like the Platonic ideal of a spiral galaxy. M31 also happens to be our largest galactic neighbor. So at 2.5 million lightyears away, it's close by. It's also much larger than M101, with a trillion stars and a hundred thousand lightyear diameter. This is probably one of the first objects an astronomer or astro-imager in the northern hemisphere is going to view or capture. You can see it without a telescope on a clear dark night. Andromeda Galaxy was first documented by astronomer 'Abd al-Rahman al-Sufi in 964. He described it as a "nebulous smear" in his famous Book of Fixed Stars, which is exactly what it looks like without a telescope—and if you know where to look. It's in the constellation Andromeda, so that should get you pointed in the right direction if you're inclined. Note: This image is a combination of RGB color and near-infrared frames I captured earlier this year and late last year. I'm just getting around to processing them! 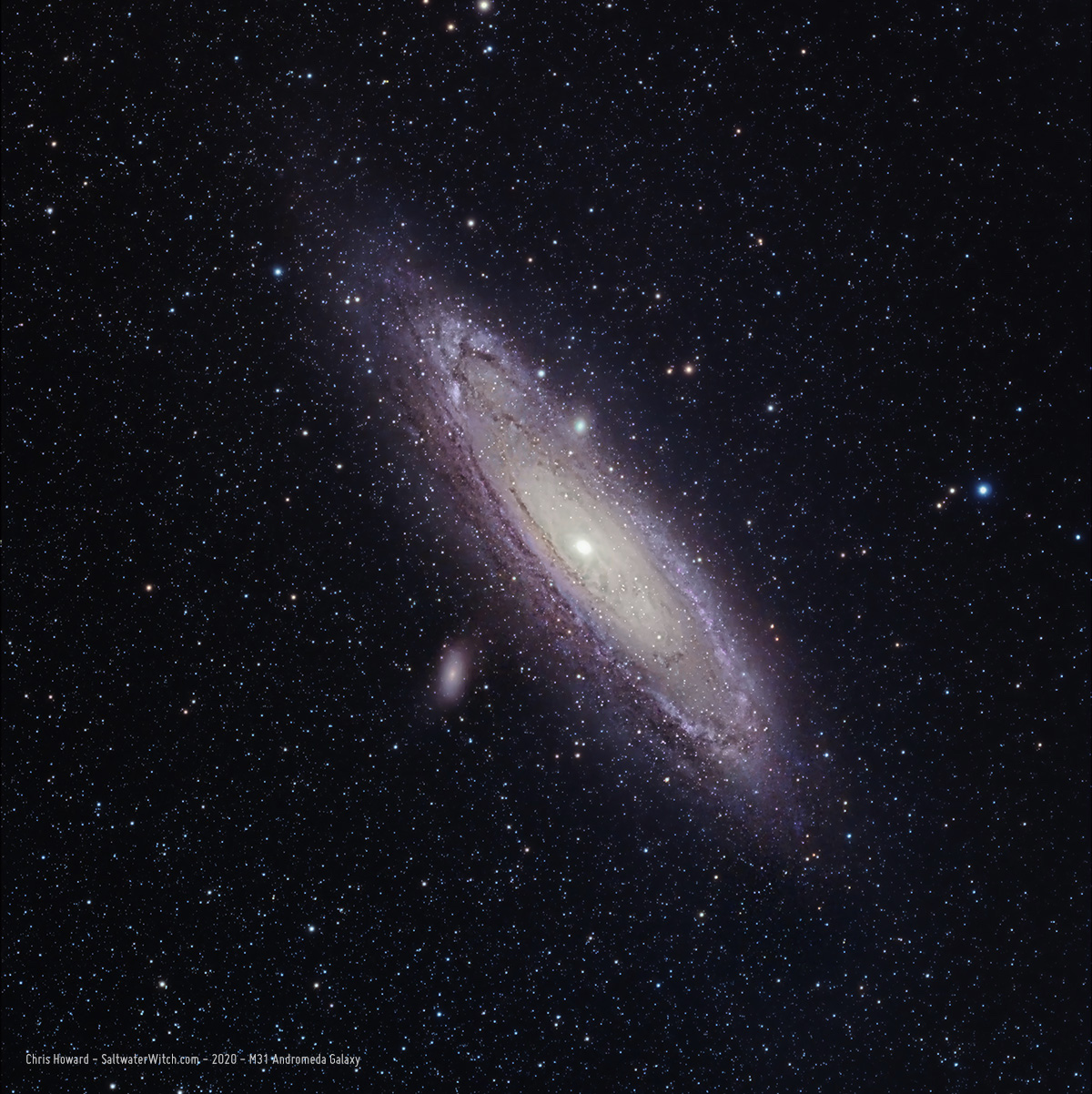 Okay, so that's it for now. Just a quick walkthrough of my narrowband rig with the William Optics Space 51 and autofocus. And with a single cable running to the setup. So, this setup really is plug in the power, polar align, and start taking subs.

Well, we'll see how easy it is once we get some clear night sky!