I just ordered the Baader coma corrector for my 800mm f/4 Newt, and spent a few minutes getting the 55mm distance to sensor spacing right for the ZWO ASI071 camera. 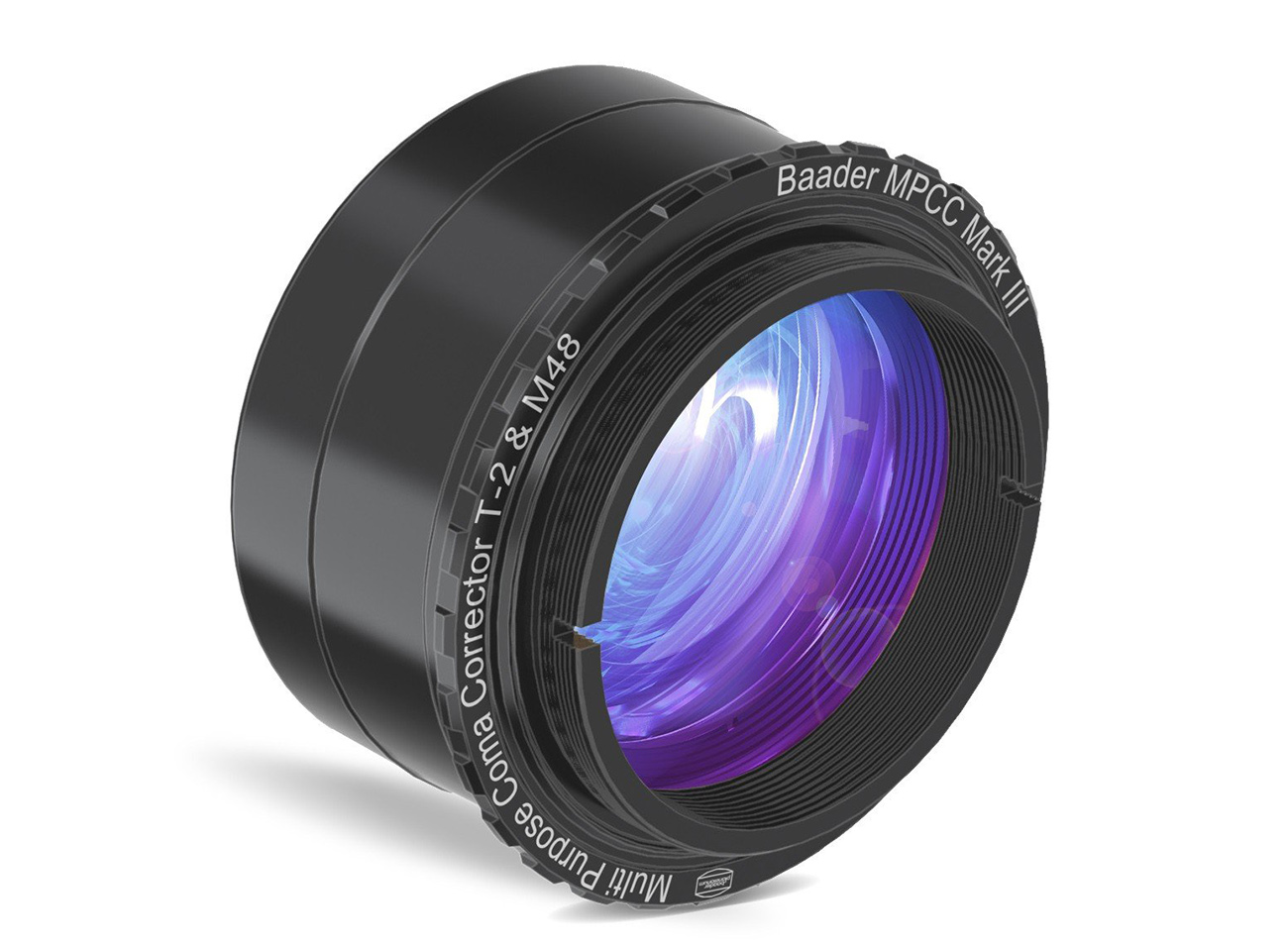 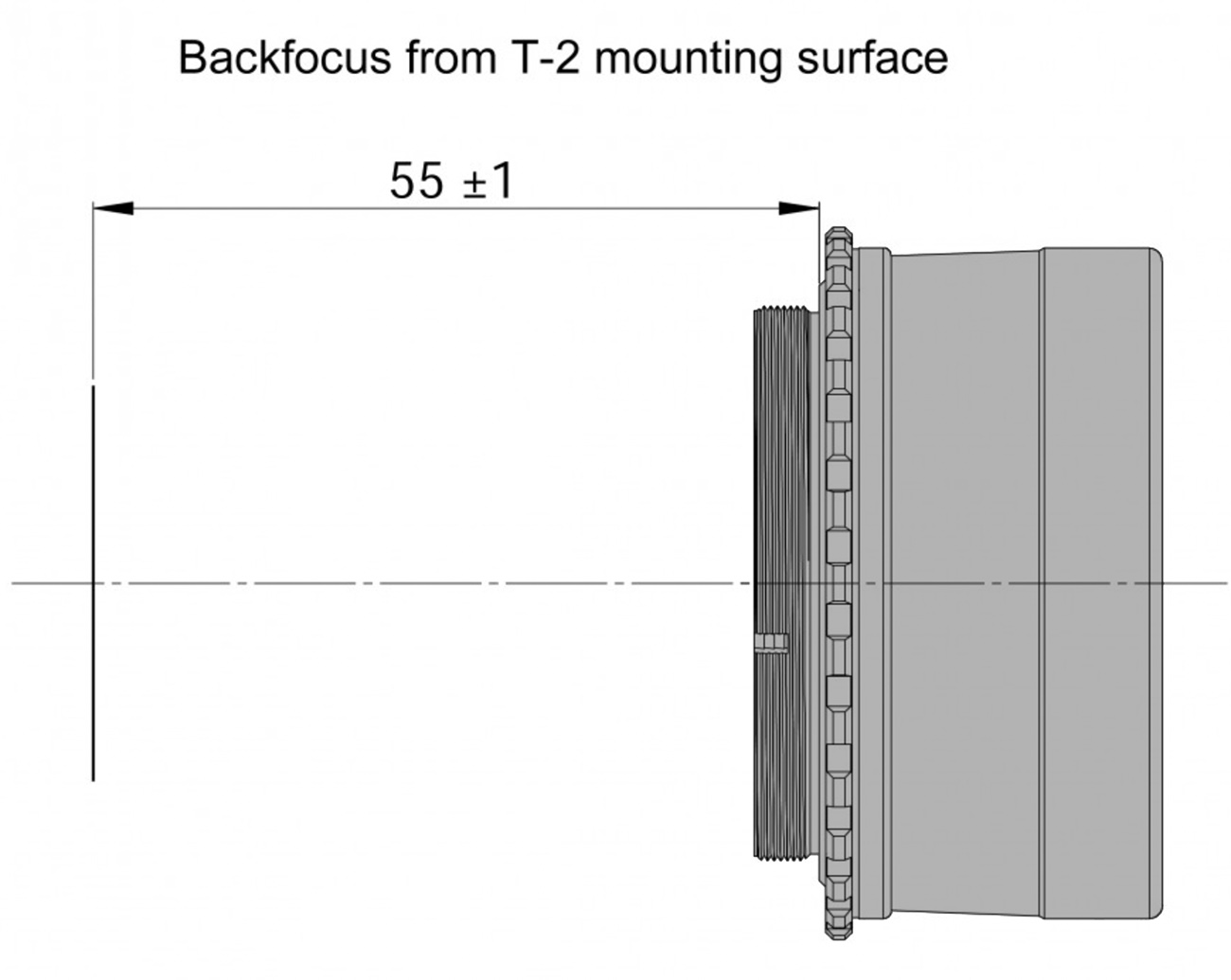 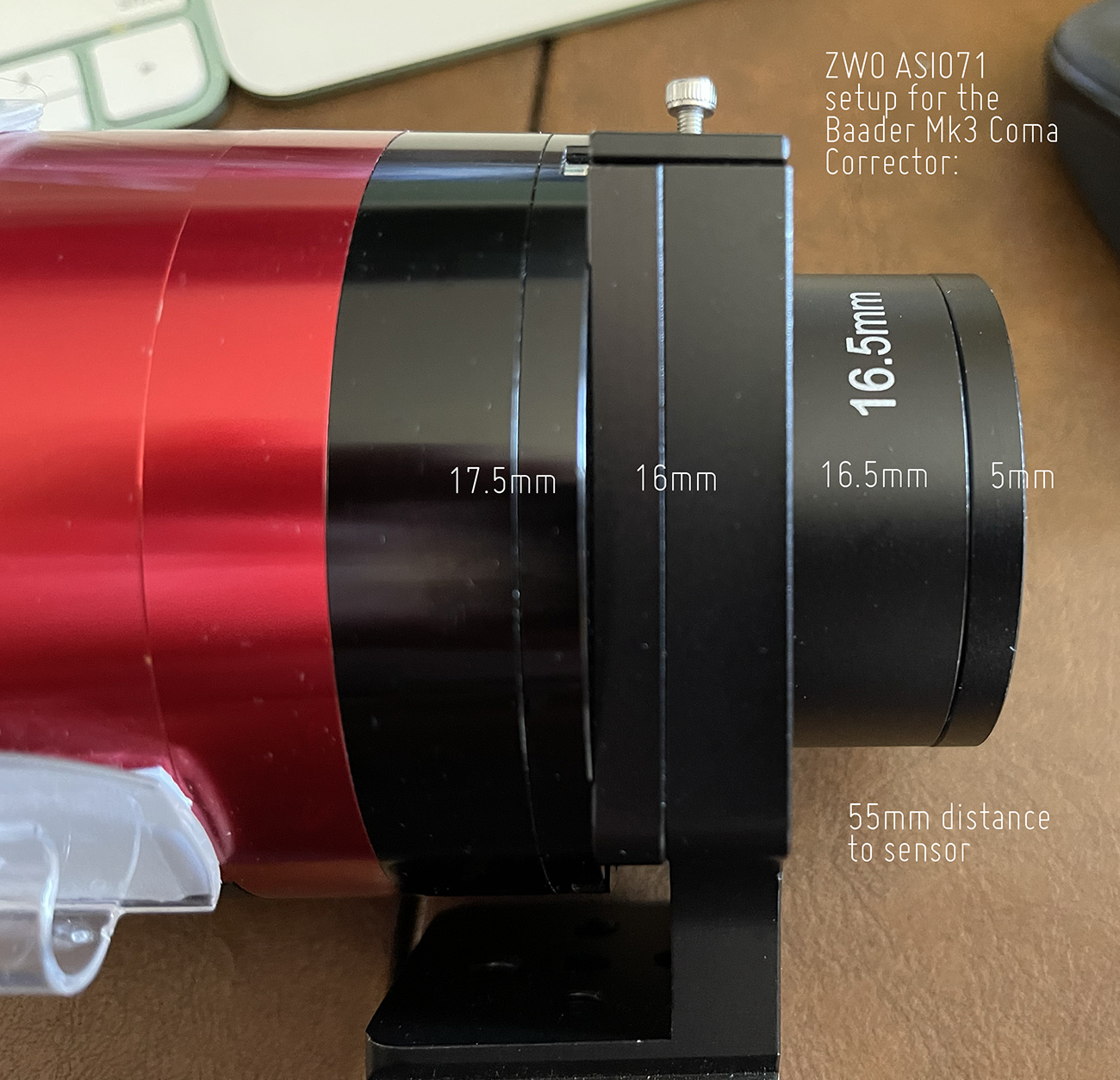 Something I've been meaning to correct for a while...

It's a gray rainy autumn day, so a good time to do a little upgrade. I ordered an ⅛" (3.2mm) thick aluminum spacer (6"/152mm OD x 3"/76mm ID) for the Orion Atlas pier adapter I use for both the Orion and the Sky-Watcher EQ6-R Pro. The Orion Atlas sits perfectly flat in the machined center and cut out ring, but the EQ6-R Pro sits slightly higher because the depth of the center is probably millimeter too shallow. Although the center bolt held it in place, the EQ6-R Pro always sat at a slight angle. I never liked that. Time to fix it with an aluminum spacer. I drilled a hole for the azimuth post, and we're back in business! 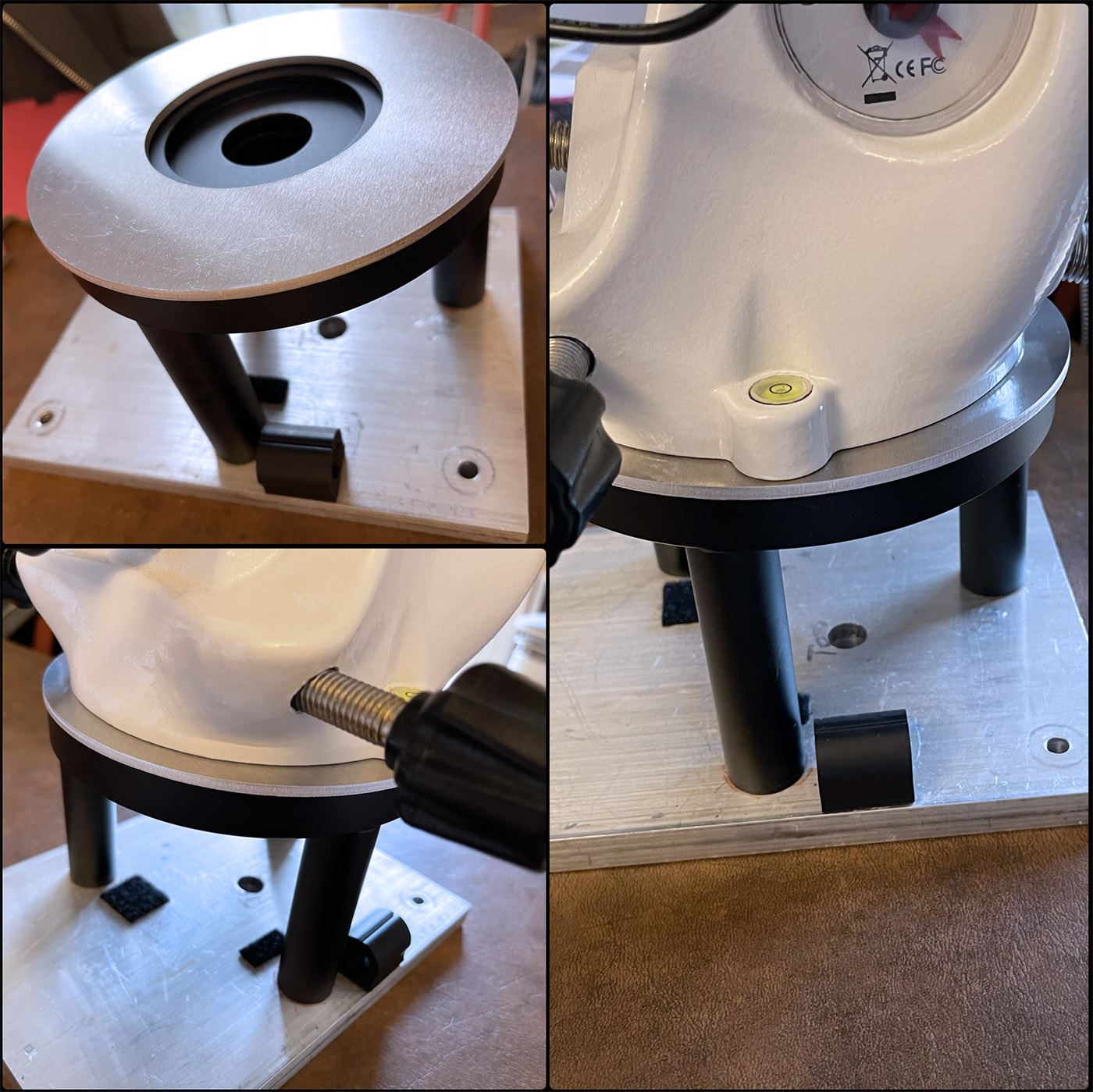 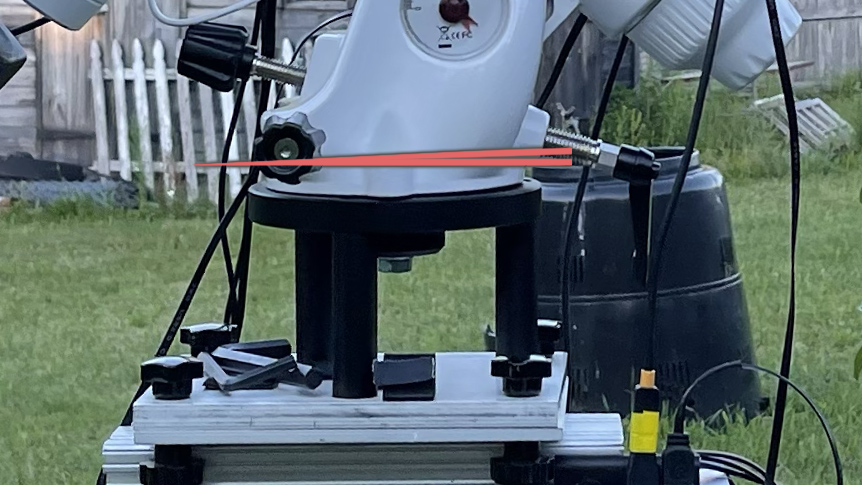 Custom power cable for the Sky-Watcher

Scrounged up a couple parts I bought a while back for this specific project, but just getting around to it now. The Sky-Watcher EQ6-R Pro telescope mount uses a 2 pin GX12-2 aviator plug for 12vdc power. I bought a couple off Amazon earlier this year, and today I soldered up the 5.5mm x 2.1mm power jack after testing which pin is ground and which has voltage. (https://www.amazon.com/dp/B07DC7KP8H).

I made this to supply power to the mount from my Pegasus Pocket Powerbox, which I have on a 15mm rail and SmallRig aluminum cheese plate (https://www.amazon.com/dp/B019C2ZM8Q). 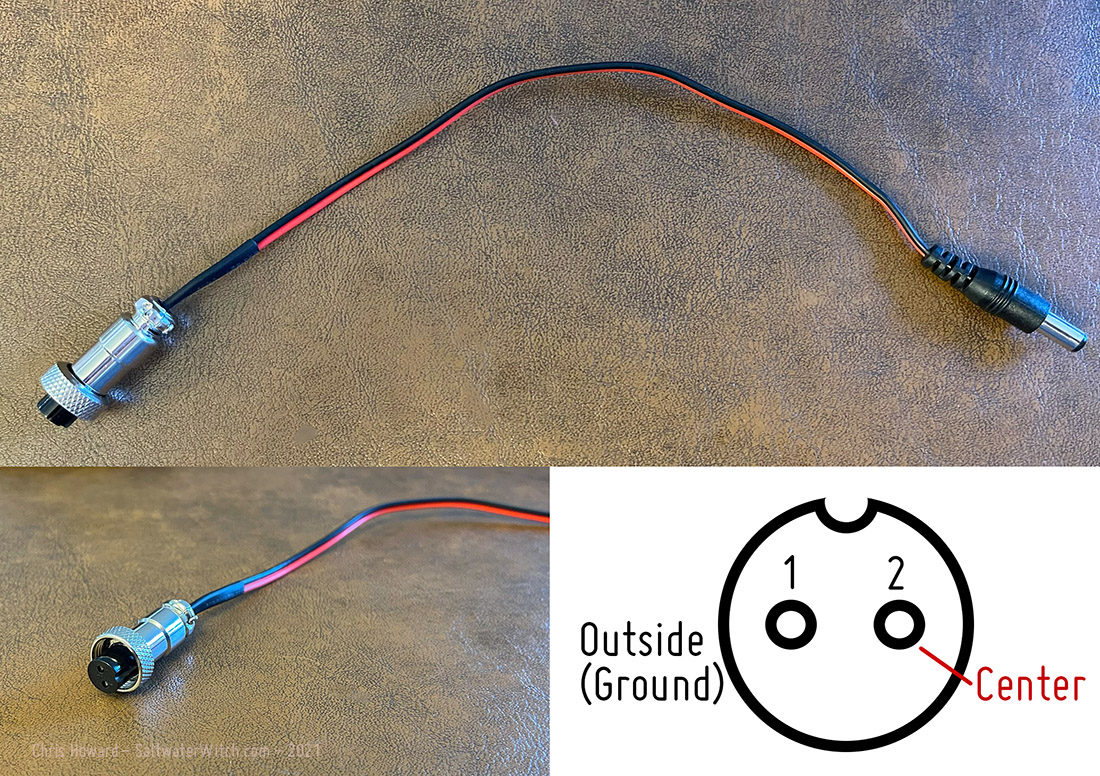 Here's the cable plugged into the Pegasus PPB, powering the Sky-Watcher mount. Tested and woks beautifully! 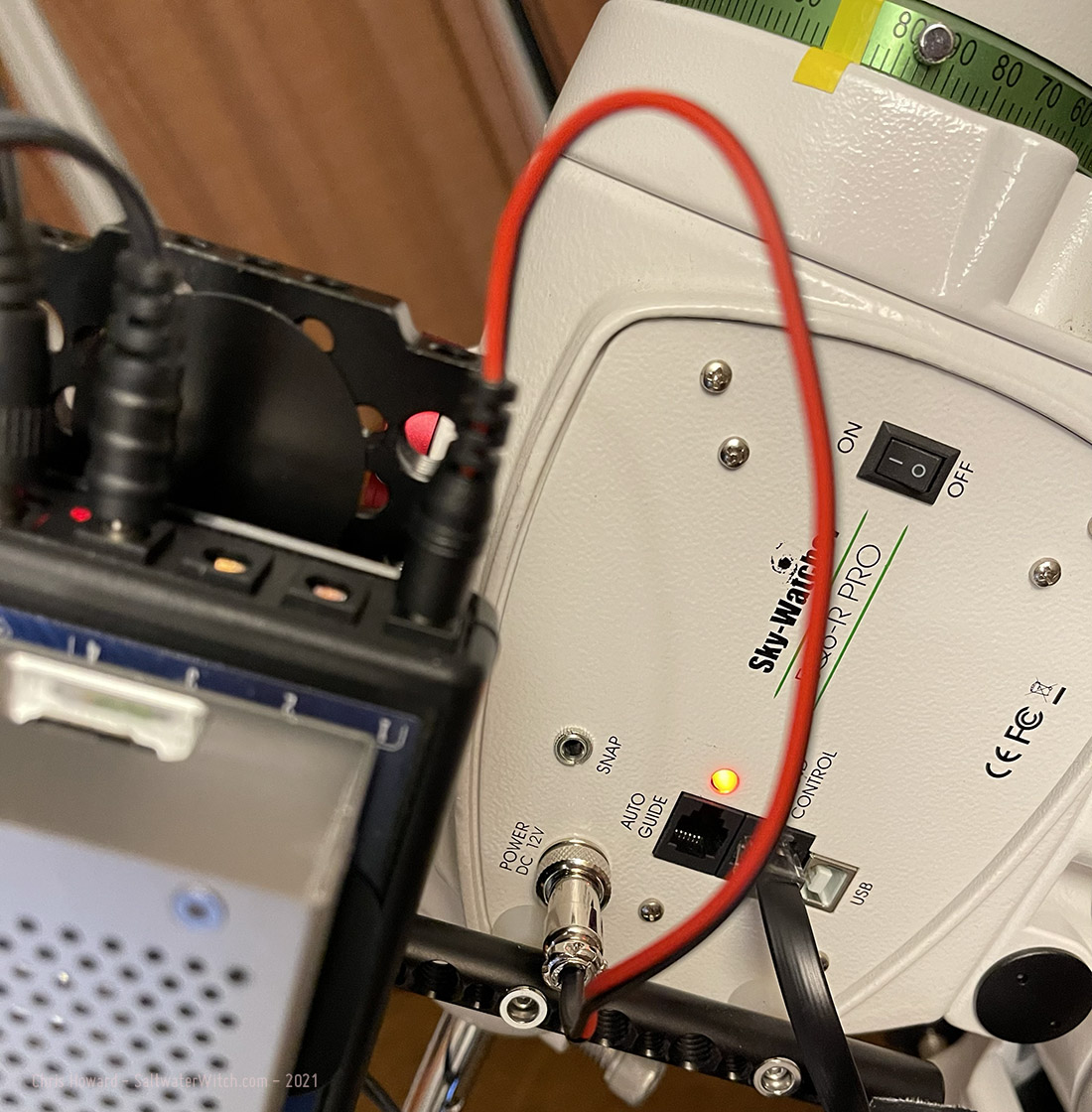 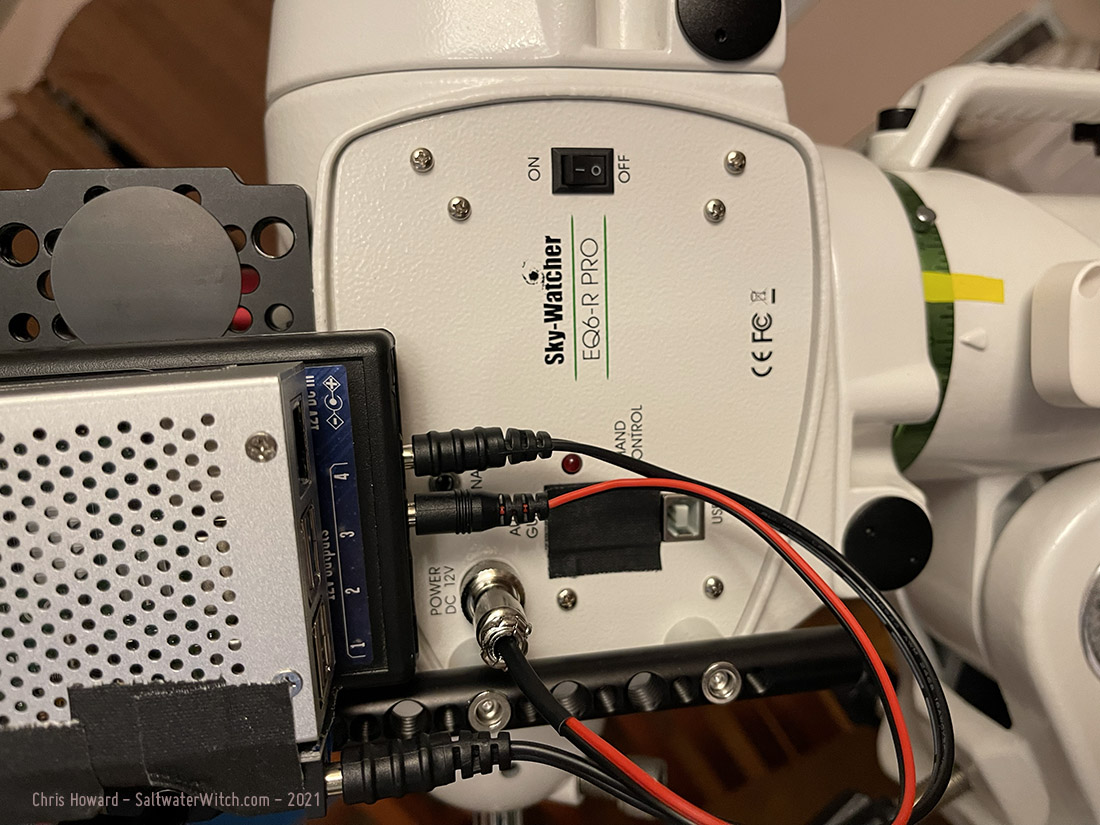 Setting up and testing my wide-field astro gear: the William Optics SpaceCat 51 primary scope, 200mm guide scope, and everything else is ZWO--autofocuser (EAF), ASI120MM-S mono guide camera, ASI1600MM-Pro monochrome primary camera, and EFW with my Astronomik 6nm narrowband filters and the new Antlia 3 nanometer hydrogen-alpha filter. I switched to a guide scope from off-axis guiding with this setup because focusing with the different thicknesses of the filter material pushed my guide focus a bit too far. I was using this 50mm/200mm FL William Optics guide scope with the 800mm Newt because I had the same situation, narrowband filters mixed with near infrared filters with different brands and glass thickness. 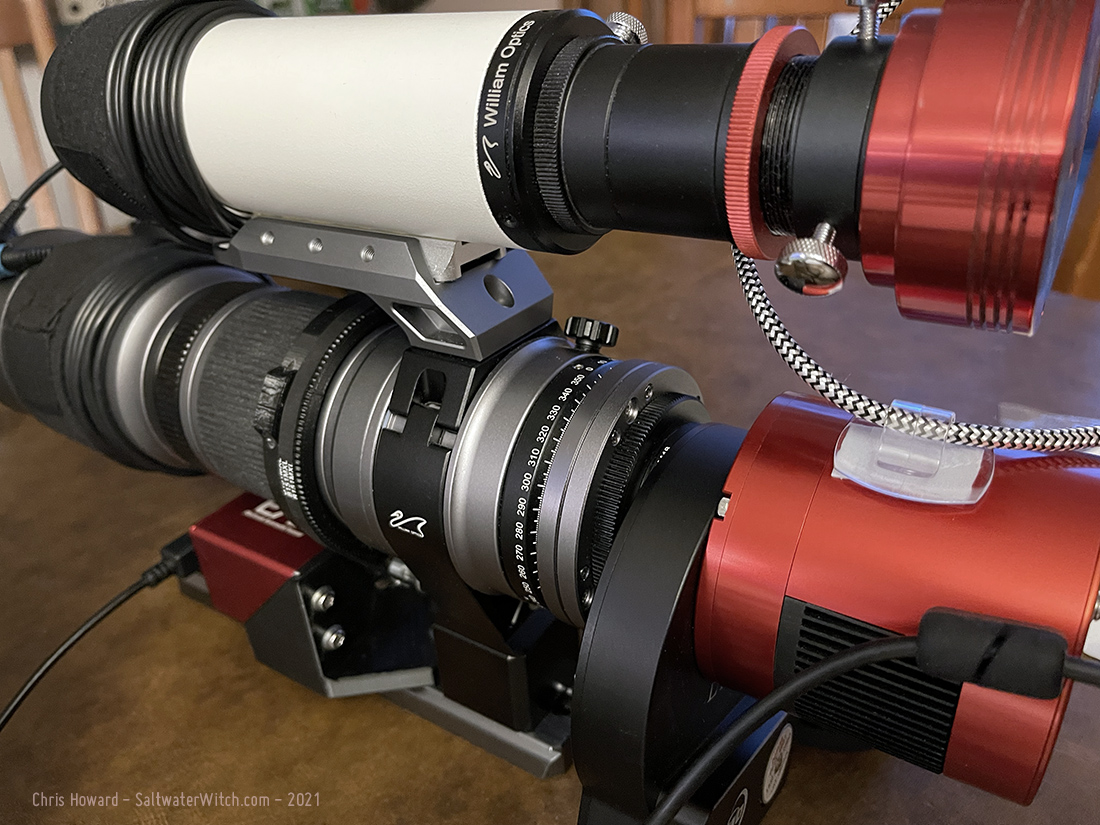 Added the Antlia 3nm Hydrogen-alpha filter in the ZWO filter wheel, and took a pic, added labels to make sure I remember where the filters are. Before this switch-up I had two near-infrared filters (a 680nm and 850nm) in slots 4 and 5, with my Astronomik 6 nanometer Ha filter in the first position. And just to make things as uncomplicated as possible I have the OIII (Oxygen 3) filter in position 2, and SII (Sulfur 2) in 3. 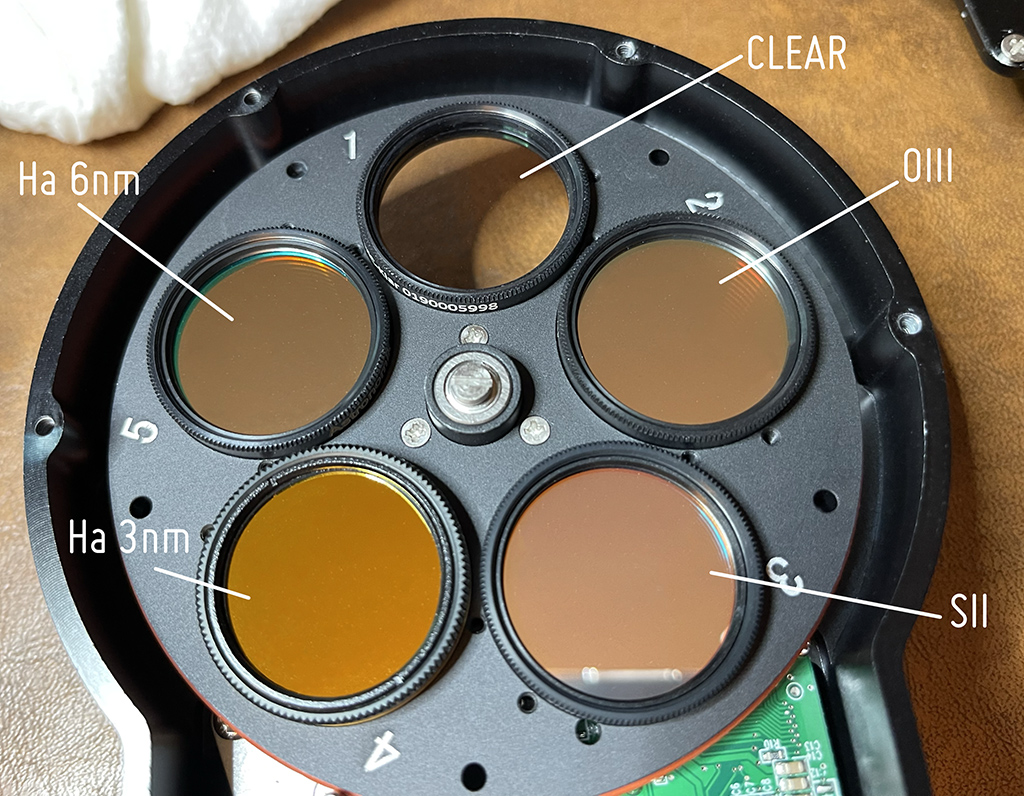 This is the gear I currently have on the pier. I'm currently running with the color imaging train, and I will continue to until I get the coma correction dialed in. I'll try other cameras after that, including monochrome/narrowband. 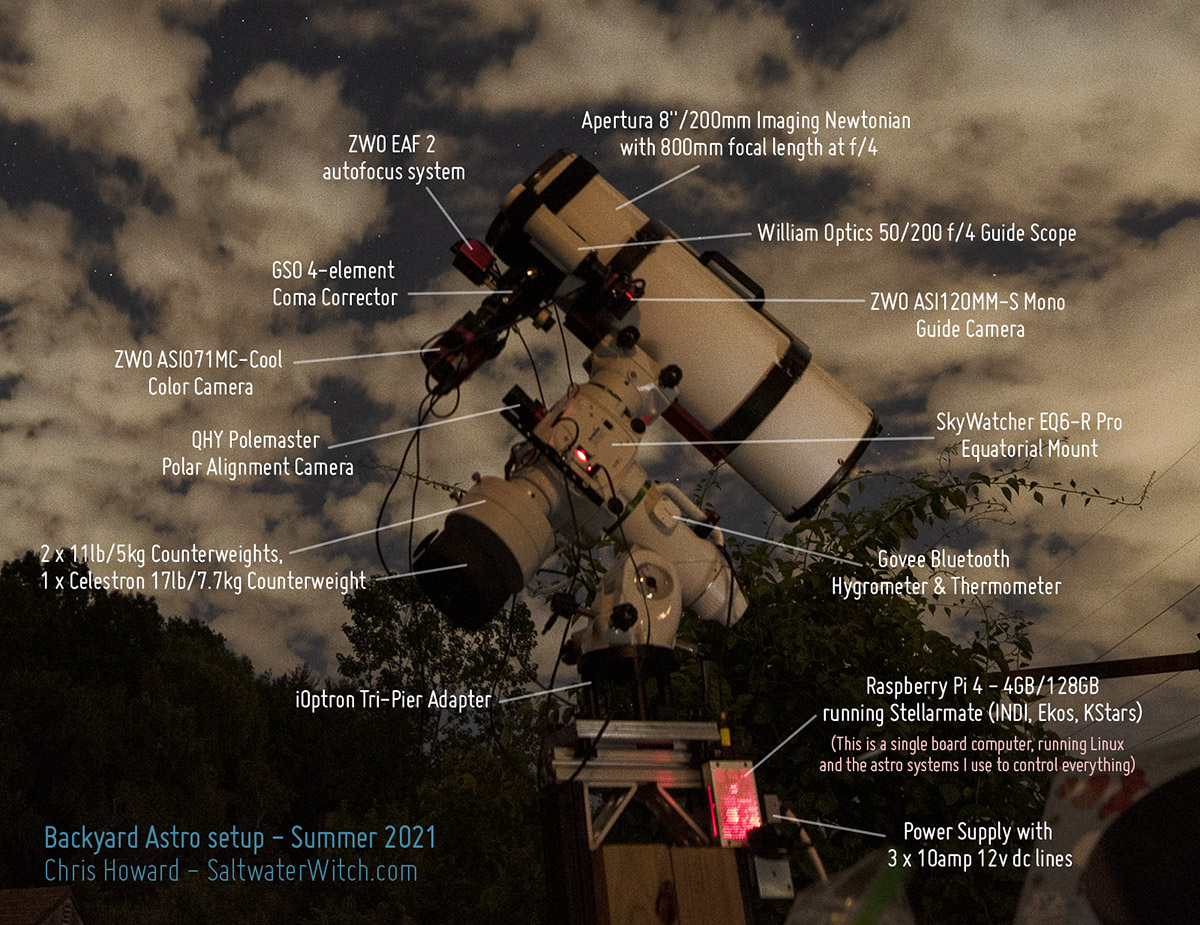 Here's what things look like during the day. The micro-observatory project is on hold until I can buy a replacement for the CEM25P mount. 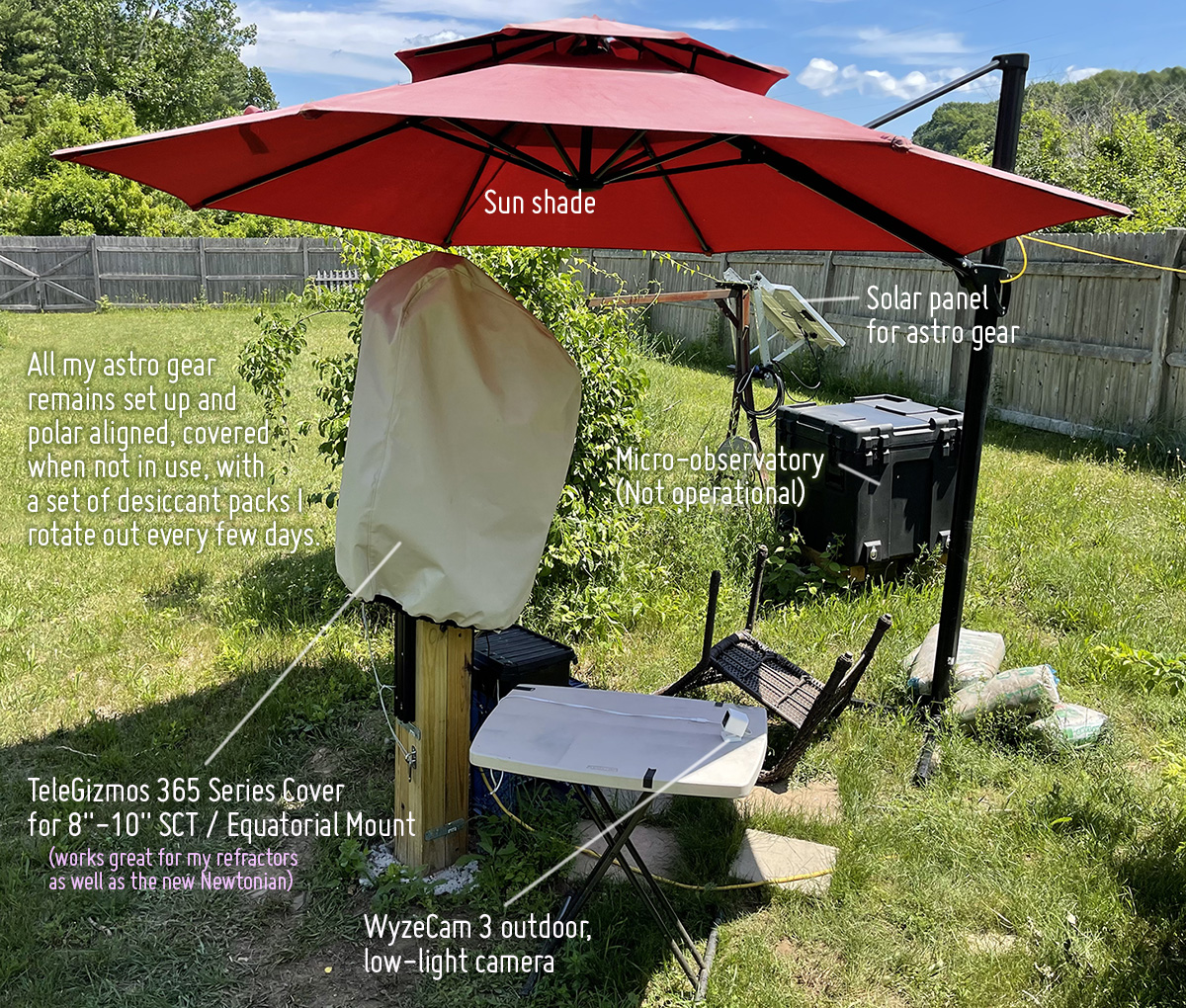 Doing some daylight focus testing with the 8" Newtonian and the ZWO ASI071 camera + Ha filter to cut down on the light. Focusing on that tree line about half a mile away.

I'm still waiting for the final piece of the Newtonian reflector puzzle, a coma corrector. This scope is fairly fast at f/4, and so the coma introduced by the parabolic primary mirror needs some correcting. Without the corrector the star field in images from a large sensor camera will bend away from the center--"coma".

In the meantime, I'm out on the deck today testing focuser position with an old William Optics field flattener/reducer, which brings the scope to 640mm focal length at f/3.2. And it doesn't look too bad. That tree line is about half a mile (~.75 km) away. It's so bright out and this astro camera is so light-sensitive that I'm shooting frames at .001 seconds with a long-pass hydrogen-alpha filter, which is only letting light in from 640nm out to about 800nm, so most of the visual spectrum is cut, and what's left is this range of near infra-red. 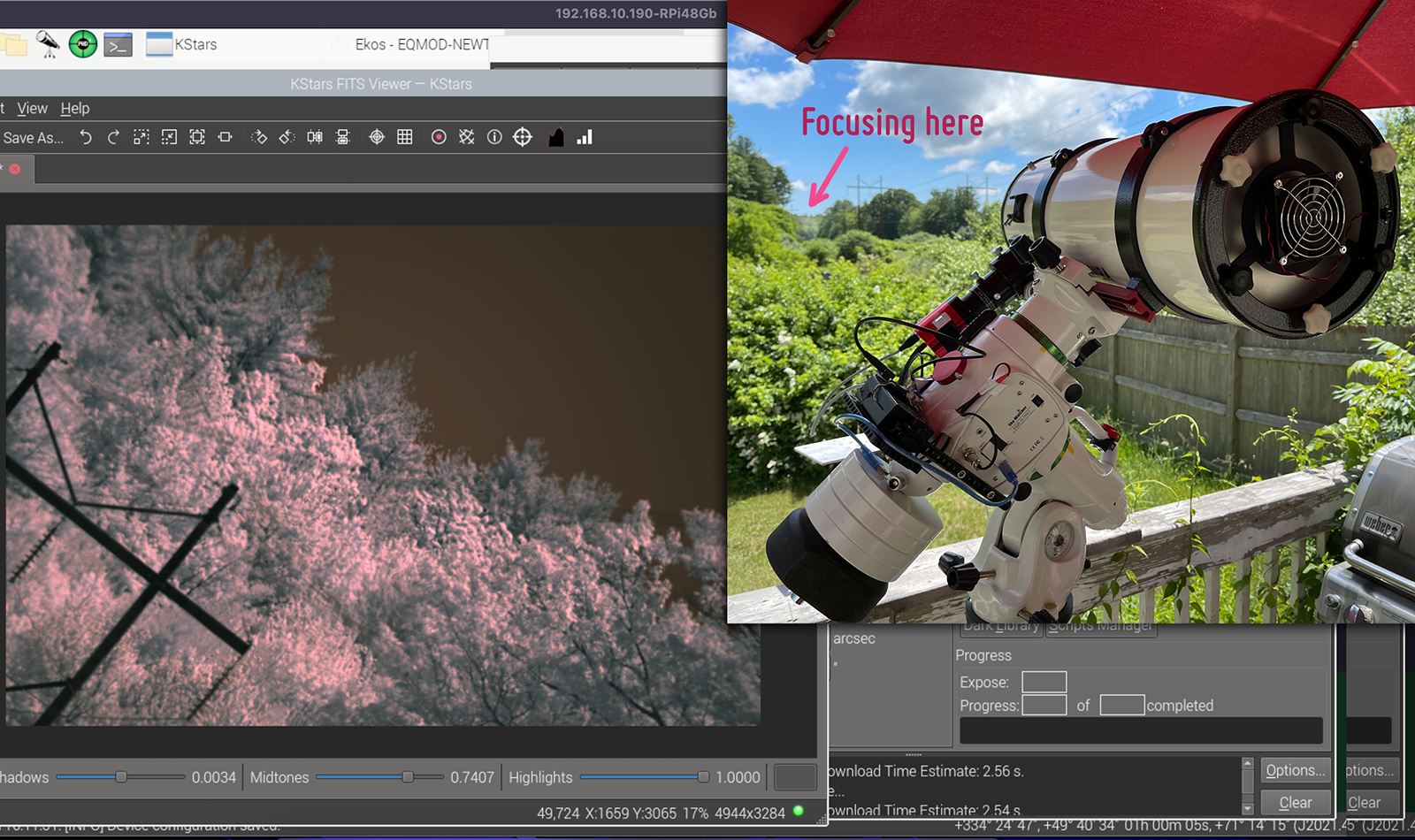 Looks like I'm going to become an OTA-wieldin' Collimatin' Reflector guy! I have been a refractor guy from the beginning. My first serious scope was the William Optics GT81--six or seven years ago! I used a Nikon D3100 and then the full-frame Nikon D750 for a little while before diving in completely with narrowband and a monochrome astro camera, an Atik 414EX CCD.

Last week I bought a new telescope and it arrived today, an Apertura 8" Newtonian Imaging scope with a focal length of 800mm at f/4. There are a bunch of inexpensive fast Newtonians on the market, sold under different names and brands, and at least some of them, including Apertura, TPO, TS-PHOTON are rebranded/painted OTAs made by GSO (Guan Sheng Optical) in Taiwan.

The Apertura came in at $499, one of the least expensive 8" Imaging Newts, but it has some upgrades over what's pictured on the Highpoint Scientific site: better focuser, better dovetail bar (see the red vixen bar in the pic below--that's included). Even the guide scope shoe has two threaded hold downs, but the product shots only show one. Pleased about that. (It came with one thumb screw, and I can add one. No problem. For the guide scope I replaced both with hex socket cap screws). 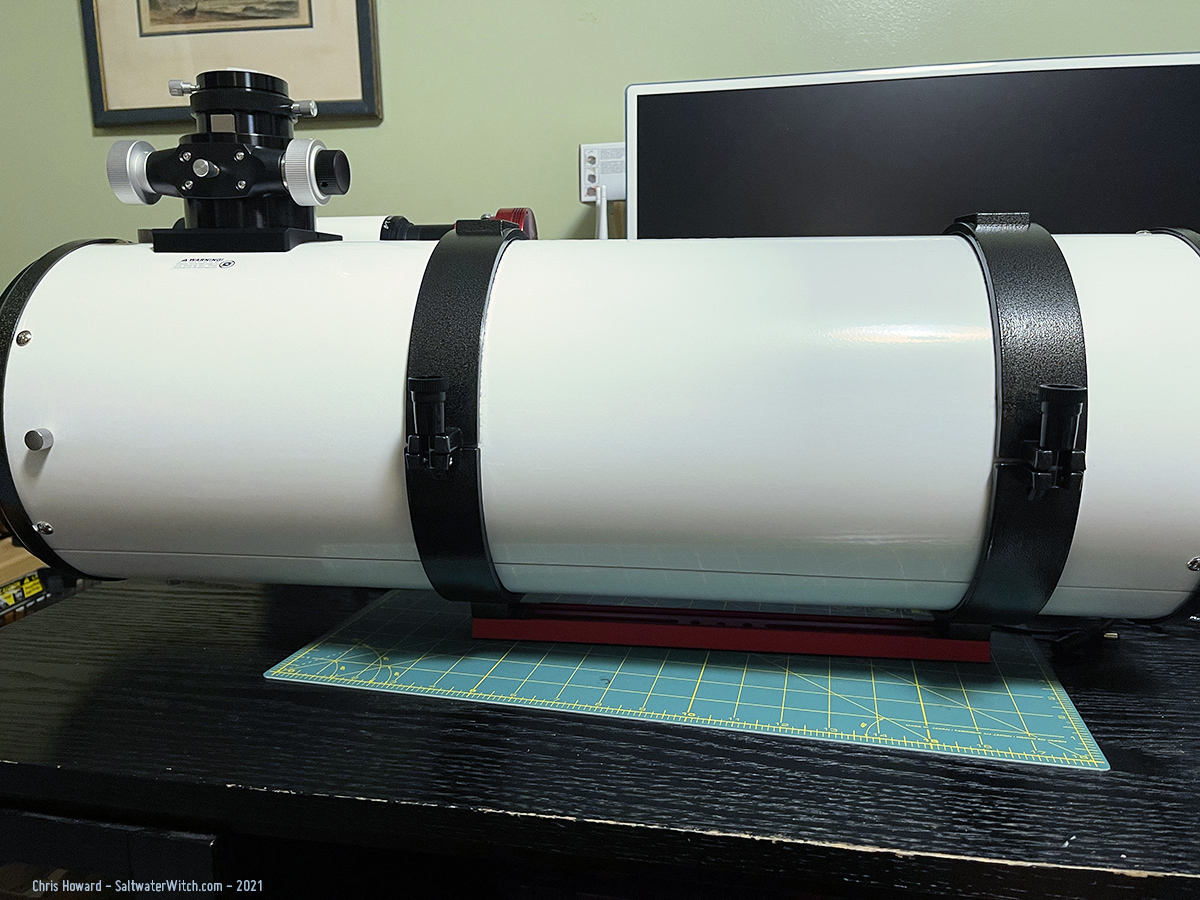 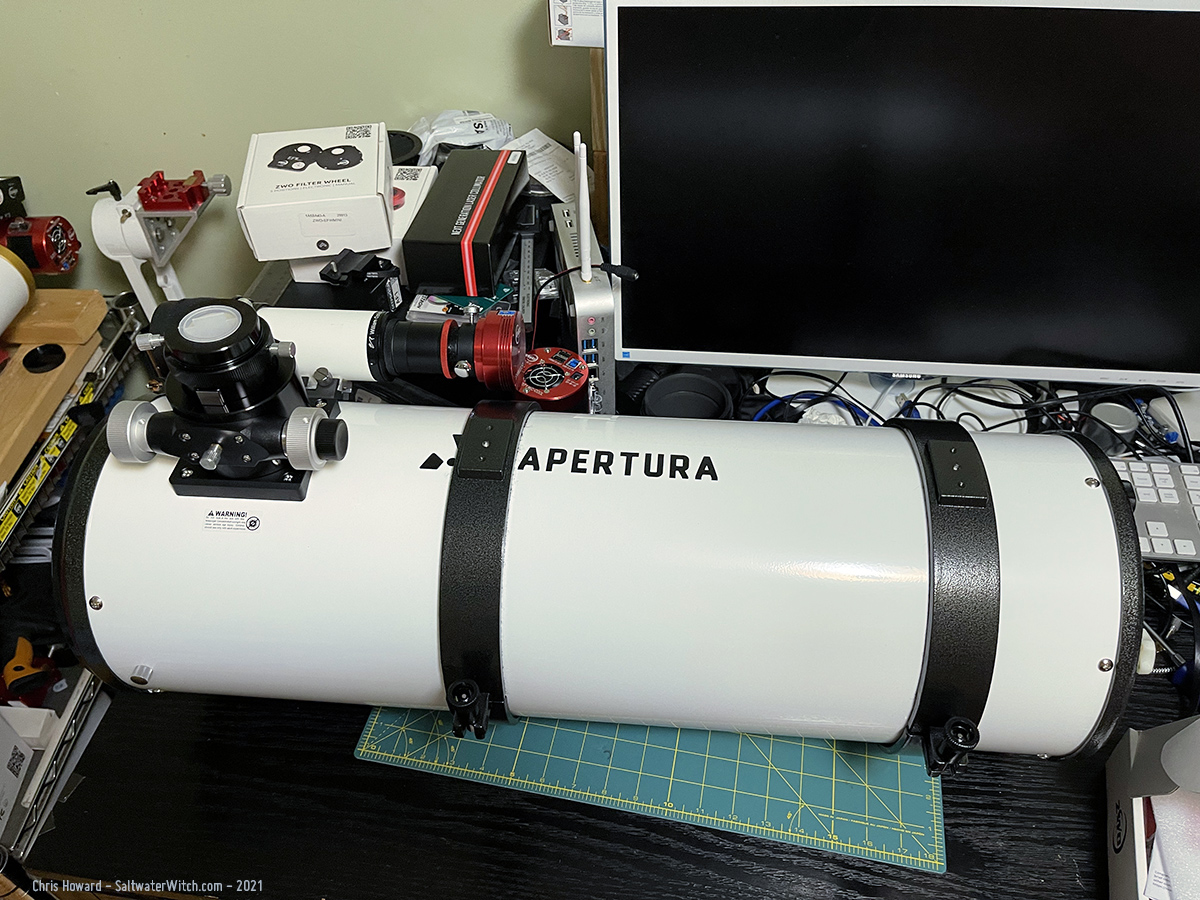 The focuser surprised me because my old Astro-Tech RC scope came with the bottom of the line GSO crayford, and that's what I expected here, given the product pics on Highpoint, but when I opened the box I noticed this one came with the better and newer GSO focuser, the linear bearing crayford. It's no Moonlite, but it'll do. 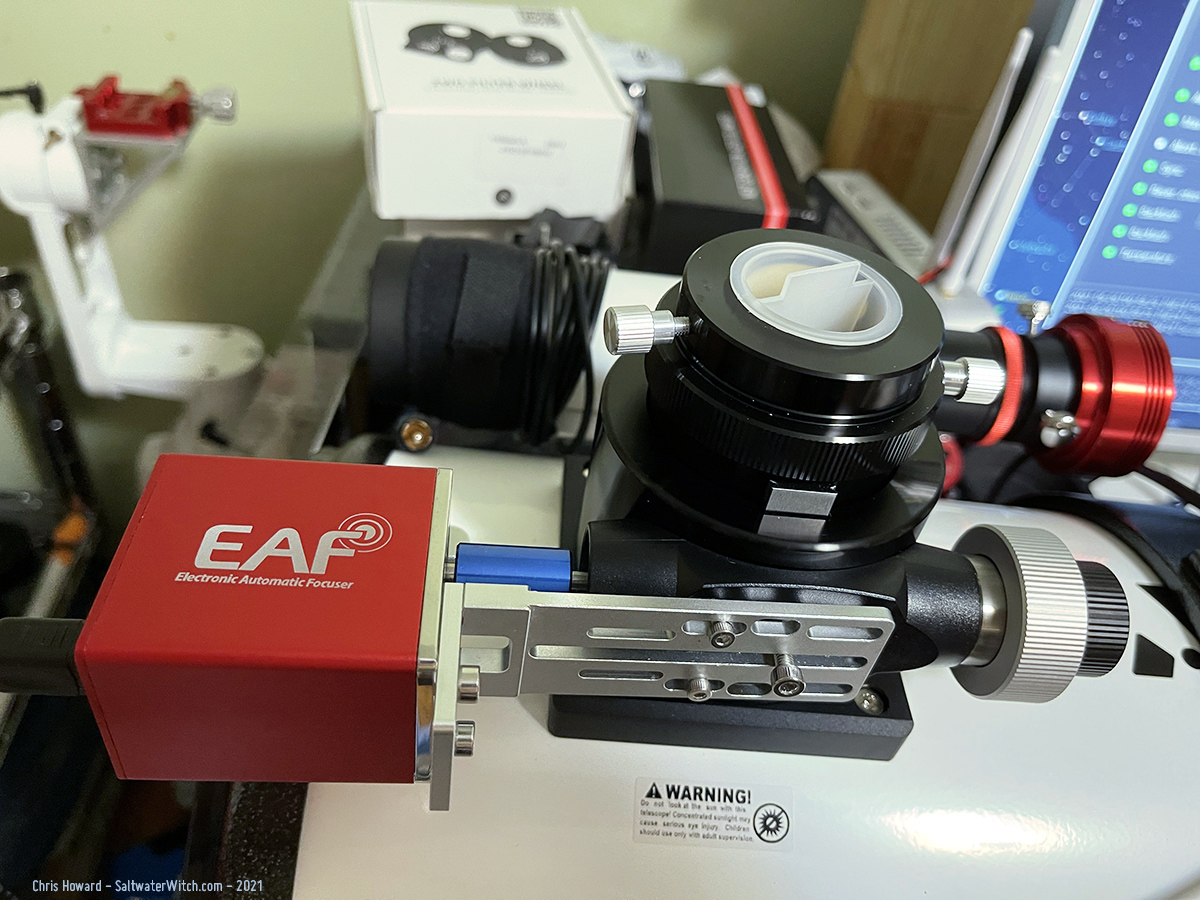 I spent no time at all adding the ZWO EAF autofocuser, the 2nd generation model that's powered off the USB and doesn't require the 12v dc line in. This has been sitting on my workbench for months, waiting for a scope to autofocus! I'm testing it out right now in Ekos (on the screen in the background). That's my William Optics 50/200mm guide scope + ZWO ASI120MM-S camera attached to the Apertura behind the focuser. 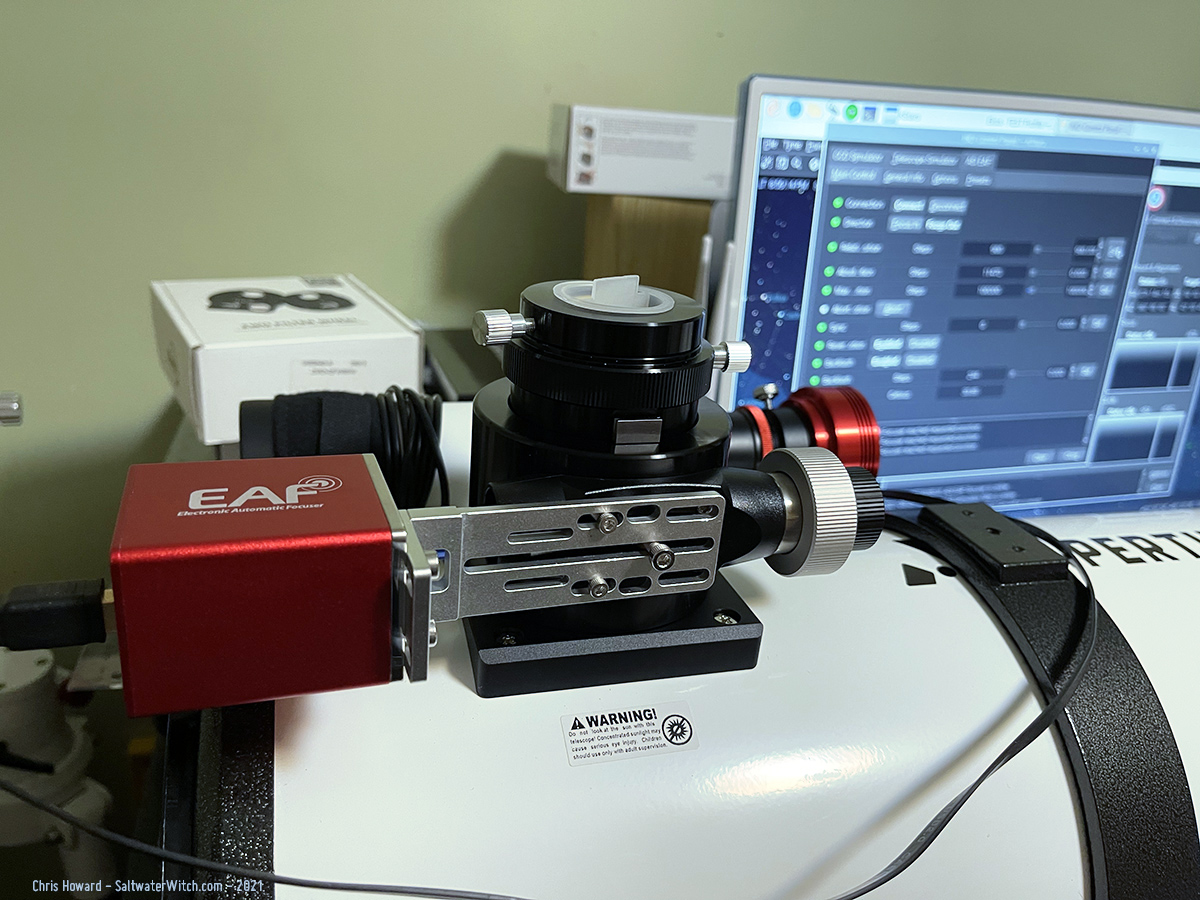 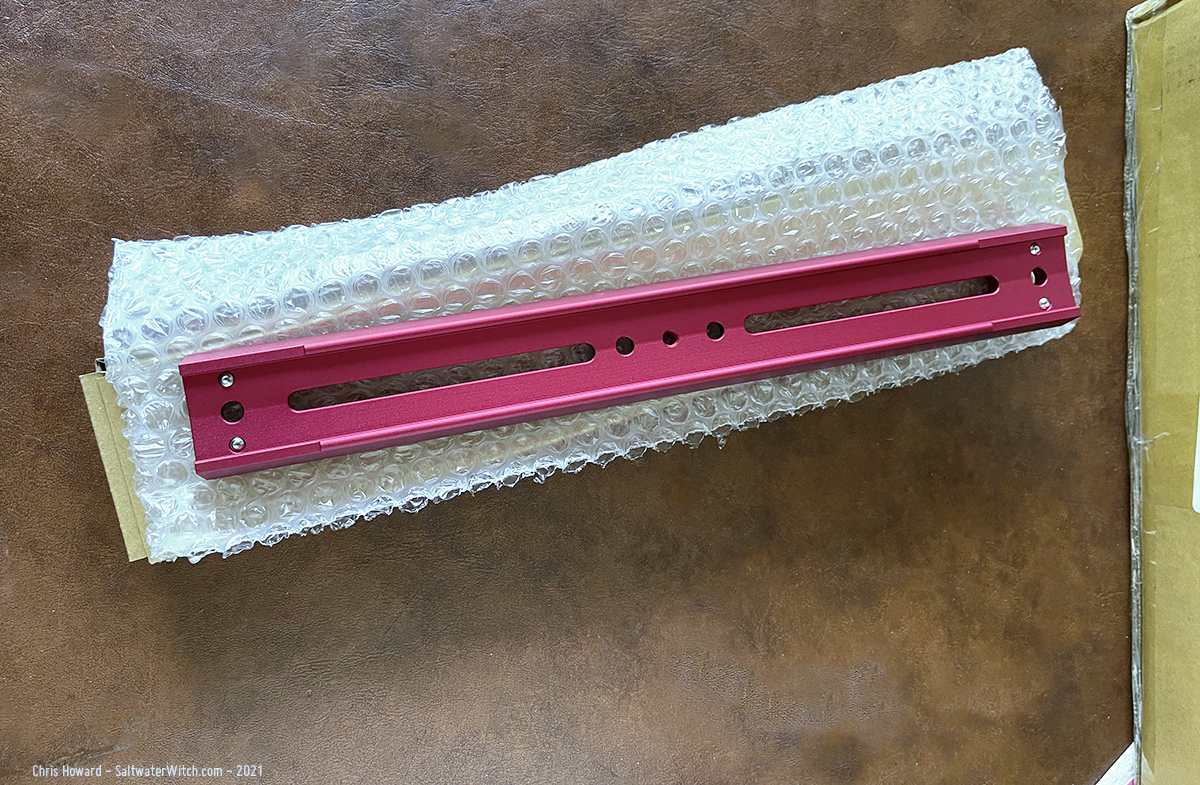 Of course, an hour after UPS dropped it off it started raining--a full on summer downpour.

I'll test things out when we get some clear skies. I'm still waiting for a coma corrector--it seems there isn't one Baader coma corrector Miii anywhere on this planet for sale. I'm on hold until late June for more stock, so it may be July before I get some serious imaging out of the Apertura 8" Newtonian. There is a much less expensive (around $100) Apertura coma corrector, which I may try.